Here is a list of 8 best free media players for Windows. These media players are absolutely free to use and support most of the commonly found media file formats.

There are various types of media file formats available out there, and you might know that each media player needs specific audio and video codecs to play any file. It can get very annoying if your media player don’t have all the codecs installed as then you will not be able to enjoy all audio and videos. Thankfully, the media players mentioned below support most of the popular formats out there.

Additionally, these media players come with other advanced features as well, like, media library management, playing online radio, some of these are skinnable, equalizer, and much more. 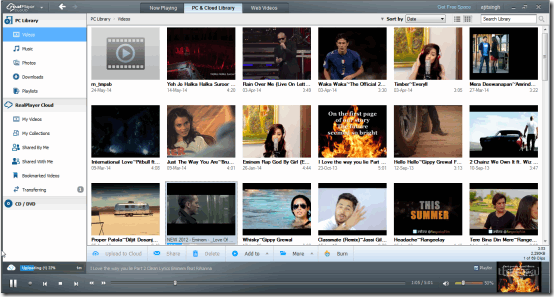 RealPlayer Cloud is one of the best media players in the market which is capable of playing almost all types of media formats. This media player can play both audio and video formats. You can use this media player to play locally stored media files as well as web videos shortlisted by RealPlayer team. Apart from playing media, RealPlayer comes with basic editing features as well, and lets you trim and convert videos. You can also choose to surf RealPlayer and other videos in your playlist even while playing any video as it then minimizes the video in the form of a snippet. You can even use it as a slideshow viewer for viewing your photos. It has separate categories for Videos, Music, Photos, and Playlists.

RealPlayer Cloud also gives you 2GB of free cloud storage for storing your videos in the cloud. Apart from this, RealPlayer gives you 1GB of extra storage on installing the freeware on four other devices, 250 MB on uploading your first video to cloud and other 250 MB on sharing any video with friends. It also has in-built browser for browsing the internet. If you use RealPlayer as a common media player for all your family members on a single system, then you can use the Private Mode for hiding any video files. It also hides those files which were downloaded while in Private mode. 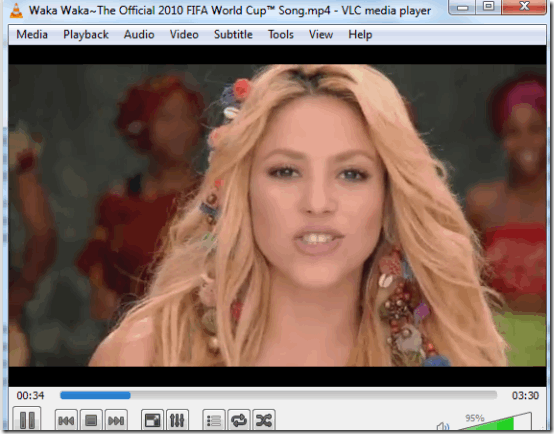 VLC Media Player supports the maximum number of file formats among all the media players tested by me. It is also available on all platforms, including LINUX. It provides a lots of options while playing any media file. You can customize audio tracks, audio device, visualizations, stereo mode, media information, Codec information, effects, filters, and much more. All these options are categorized under Media, Playback, Audio, Video, Subtitles and Tools. One of the great features of VLC Media Player is that you can stream media over network and even webcams. While playing any video file, it lets you zoom, set aspect ratio, crop, deinterlace, deinterlace mode, etc.. There is one feature of VLC which makes it quite popular among users. This feature is that it supports various hotkeys which saves you from going to each and every tools and then subsequent option.

You can also play different types of discs like DVD, BluRay etc. It even provides various customization features like choosing the shape and size of controller buttons which are used to control audio/videos. There are various other tools which you can set according to your choice using the option Preferences. Using this option, you can set preferences for Interface, Audio, Video, Subtitles, Codecs, and Hotkeys. 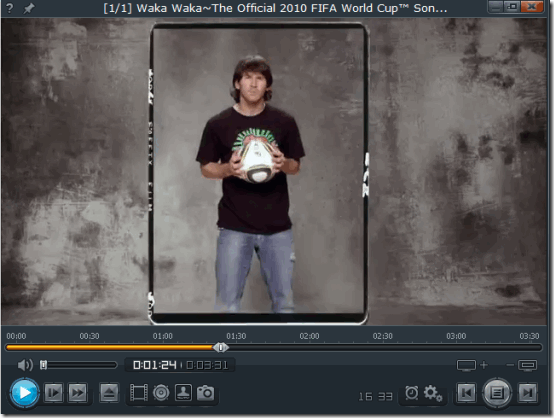 Light Alloy is a pretty good media player and can be considered as a competitor to VLC Media Player. It can play almost all the media formats just like VLC Media Player. It consists of different skins for customization and even different options to make you enjoy your videos even more.  Some of the options provided by it are: Volume control, video frame options, playback control options, real-time clock, playlist options, and much more. One interesting feature of the player is that it lets you assign your own shortcut keys. It means that you don’t need to remember default keys, just assign as per your preference. The media player is equally good in playing both audio and video formats without any problems. If your video has subtitles, then you can change the fonts size and font style of subtitles. You can use it to set alarms and even auto shut down, sleep, hibernate, turn off-screen of your system. 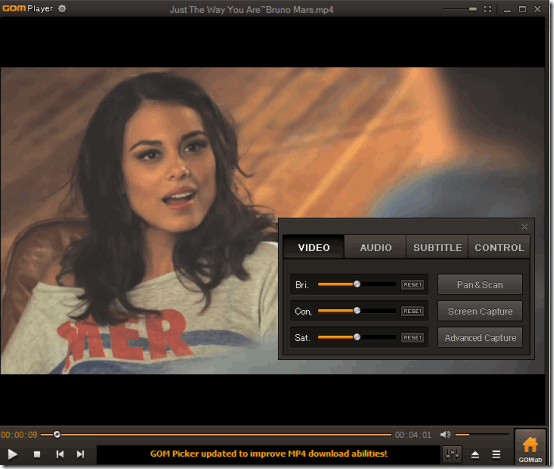 The next media player in the list is GOM Player. It has a very classy looking interface with pointed corners, which gives it a rectangular shape. It supports many common file formats but if you have got any file which is not played by GOM Player, then you can check for the file formats in “Others” option under Settings. If it is not enabled by default, then you can enable it from here. GOM Player lets you make the screen transparent while viewing video, which gives a beautiful visual experience. Apart from this, you use the control panel for changing the Brightness, Contrast, Saturation of video including Subtitle settings, Time jump, and Playback speed.

From the first launch of GOM Player, you will find it to be a simple player but you can unlock its true potential by setting up the preferences. You can set preferences for General, Playback, Video, Audio, Filters. For example, you can choose to repeat playlist, shuffle playlist, subtitle color/opacity, font style and size, aspect ratios, luma offset, Chrome offset and many other options. 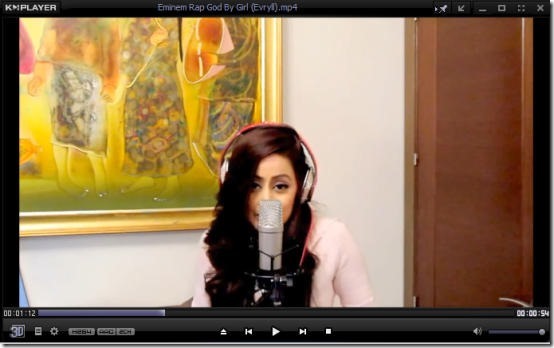 KM Player is the fourth media player in the list. This player also supports lot of audio and video formats. Additionally, it comes with an interesting feature that it displays the thumbnail image of playing video on the seek bar. It means that while playing any video, you can hover your mouse over seek bar at any point to view the thumbnail image of the scene of video at that particular point. This helps you in reaching to a specific point of video of your choice, even if you don’t remember the time interval of that point.

Apart from this, KM Player gives you all other customization options and settings like other media players. You can adjust the brightness, contrast, equalizer, hue, saturation, rotation, flip, effects, and many other advanced settings option. It also has 3D option which you use to see different effects on playing video like Original Image Top and Bottom, Original Image is 2D, Original Image Side by Side. 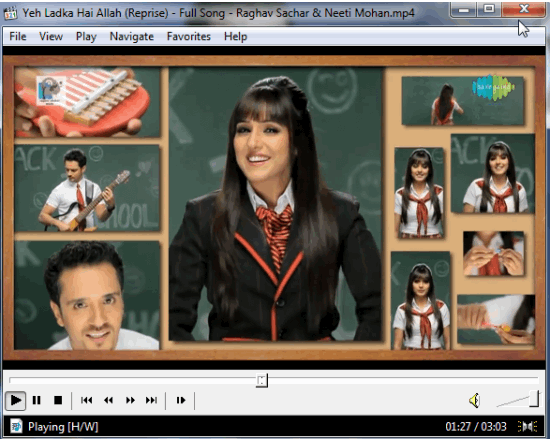 Media Player Classic is one of the old players in the field of media players. Just like its name, it has playback controls with classic (90s era) look. It supports major audio and video formats and also offers various features. You can use this player to play media files stored locally on system, on DVD, external device, or in directory. This player to capture image and thumbnails of any video while playing it on player. It also lets you save subtitles from videos, upload subtitles to videos and also search for subtitles.While playing videos, you can make playlists, go full screen, do zoom, and change playback speed including step by step playback.

It also has option for displaying stats about video on the screen while it is being played. The stats includes Frame Rate, Refresh Rate, Settings, Sync Offset, Backbuffer, Jitter, Subtitles, Buffering, Render Device, Decoder, and much more. Besides this, you can adjust the video size, aspect ratio, presets, etc.. The only minor drawback is that it doesn’t display album art while playing audio files. 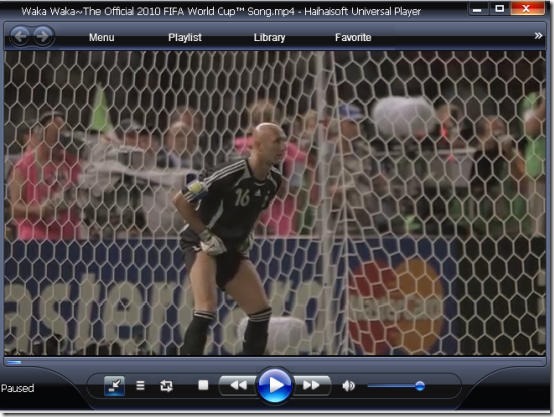 HaiHaiSoft Media Player is a media player which gives an impression of using some portable media player. It has media controls similar to Windows Media Player. You can easily navigate between all the options while using this media player. One great feature of this media player is that it lets you add videos to Favorites for accessing and watching them later. Under options, you can see different tools and options which will help you making this player more effective. You can set settings for player formats/keys, playbacks, internal filters, external filters, subtitles  and much more.

If you are looking for a media player with minimal distractions and no complexities, then I will suggest you go for this one. 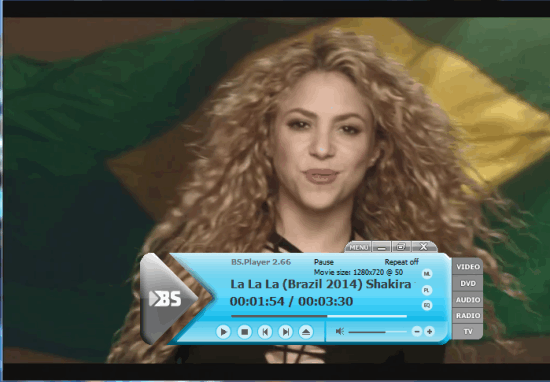 The last media player in the list is BS.Player. Its interface looks like that of pocket mp3 players. You can use this media player to play Audio, Video, DVD, Radio, and TV shows. It also lets you stream video by entering valid URL. It has an option called Media Library which automatically scans for all media files on your system and makes a playlist of them. The playlist is created by grouping all audio and video files in different lists. It also has option of creating custom playlists.

If you want to open a particular file then you can do so by right clicking anywhere on media player. This media player contains options similar to most of the other media players like finding subtitles, capturing screenshots, saving thumbnails, adjusting equalizers, etc.. The only drawback of this media player is that it makes it quite uncomfortable to control audio/video playback. You can control media playback either by right clicking on the playing media or by using the separate mp3 player like console. While using this console to control media file gives a feeling of using a remote control to control a TV. Apart from this drawback, BS.Player is a good media player with all the functions that it provides.

These were the 8 free media players for Windows included in this list. As I said, all of these support most of the common audio and video formats. In case you still come across a format that is not supported, you can use these software to install missing codecs.

Try out these media players and enjoy your media files even more.