Here, we talk about 5 free music player apps for Windows 8 devices. Listening to music is a nice recreational activity. Whether you want to relieve your stress after a long and tiring day, or you want to simply refresh your mood, listening to music is a nice way to do so. But to play music, you need a music player. Odds are that you have your Windows 8 device lying around but not your iPod. So what do you do now?

Here are 5 apps that will allow you to listen to music in such situations. All of these music player apps support multitasking, and these Windows 8 apps can be downloaded for free, and provide the smoothest music playing experience out there! 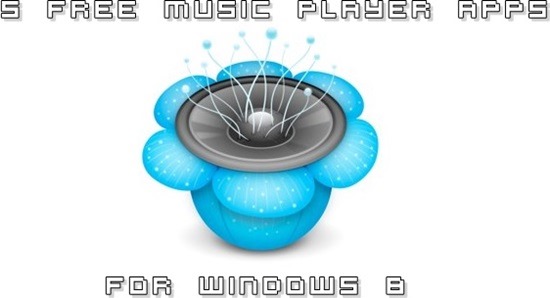 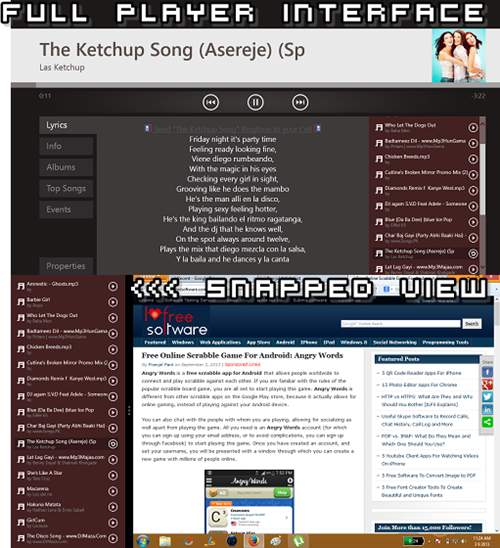 LyrAMP Music Player is my personal favourite when it comes to Music Player apps for Windows 8. Not only does the app support snapped view for multitasking processes, the app also fetches and shows you lyrics and information about the track that you are playing on your device if your device is connected to the internet. The app has a very smart interface comprising of easy to understand controls, which although may not offer eye candy effects like other Music Players out there, but are fully functional and incredibly self-explanatory. These controls, namely, Lyrics, Info, Albums, Top Songs, Events and Properties are present towards the left side of the screen in a tabbed layout. Clicking on each of these tabs will show you the lyrics of the song, information about the track like some insight into how the song was recorded by the band, view the top songs of the band that have rocked the billboard charts, view the upcoming events, and finally, view the properties of the track (file size etc.). To fetch Lyrics, Info, Top Songs and Events, you need to be connected to the internet. The playlist of the tracks appears at the right and when you snap the music player to the screen for multitasking, the app shows you only the playlist and necessary controls like play, pause etc. by hiding the lyrics etc.

This is a good app to have, because of the unique feature of showing you the lyrics in real time! 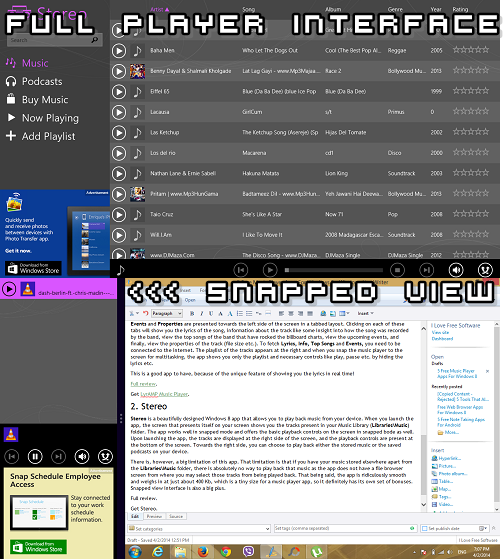 Stereo is another beautifully designed Windows 8 app that allows you to playback music from your device. When you launch the app, the screen that presents itself on your screen shows you the tracks present in your Music Library (Libraries\Music) folder. The app works well in snapped mode and offers the basic playback controls on the screen in snapped mode as well. Upon launching the app, the tracks are displayed at the right side of the screen, and the playback controls are present at the bottom of the screen. Towards the right side, you can choose to play either the stored music or the saved podcasts on your device.

There is, however, a big limitation of this app. That limitation is that if you have your music stored elsewhere apart from the Libraries\Music folder, there is absolutely no way to play back that music as the app does not have a file browser screen from where you may select those tracks from being played back. That being said, the app is ridiculously smooth and weighs in at just about 400 Kb, which is a tiny size for a music player app, so it definitely has its own set of bonuses. Snapped view interface is also a big plus. 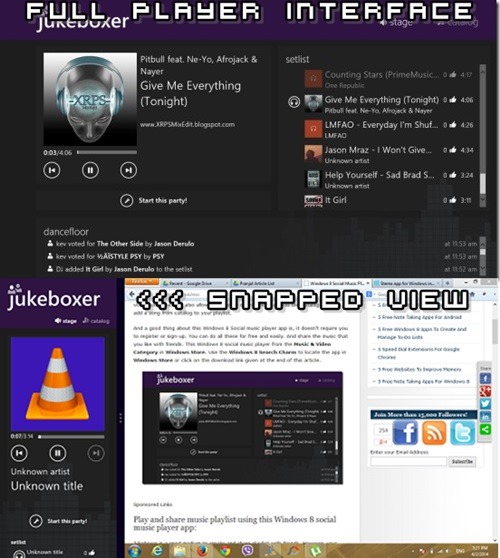 Jukeboxer is another good app to play back music on your Windows 8 device. This is a great app that supports snapped interface for multitasking. Let’s talk about the main interface of this app. Upon launching the app, you will be presented with a screen that automatically lists the tracks present in your music library (Libraries\Music) folder, much like the Stereo app that we talked about just now. Unlike the Stereo app though, this app can open tracks present in other folders as well, but again as there is no native file browser screen present in this app as well, you have to use the File Explorer built into Windows 8, and change the properties of the music file to open it using Jukeboxer by default. If you don’t know how to do it, just let it go and move the music file to your music library folder for an easier alternative. The app upon opening offers playback controls at the bottom of the screen, the playlist at the right side of the screen and the album art towards the left side. When you snap it to the right/left side of the screen, the app optimizes its interface and shows a neat looking album art and minimalistic playback controls. The app also supports creating and saving playlists of music files, which can then be played in sequence at a later stage. Apart from all this, it supports shuffling and looping music as well! 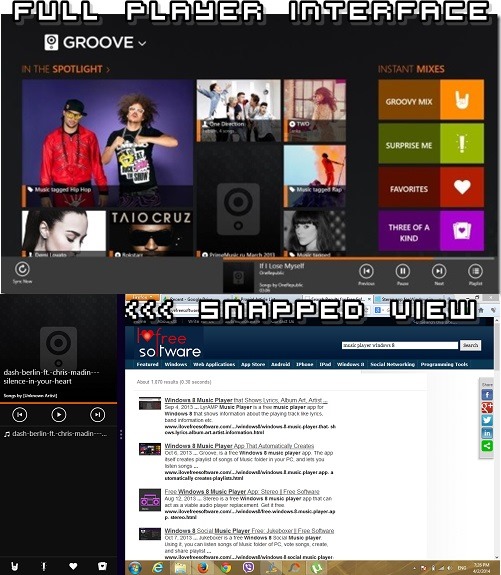 Groove is a one of a kind app for Windows 8 devices. Not only does it allow you to create playlists and save them, it also assists you in creating smart playlists by assessing the songs being played. You can mark a song being played as a favourite, and then all the songs marked as favourite can be played back easily by clicking on the Favorites button under the INSTANT MIXES column. This is not the only option: the app also provides you options like Groovy mix, Surprise me, and Three of a kind which play groovy tracks (tracks having hip and peppy beats), play a random track and play a set of three tracks that are similar in properties like bitrate, beat type, etc. respectively. This app also supports playing tracks from your Music Library by default, although you can navigate and select the tracks that you wish to play yourself. Snapped view interface is also nice, showing the album art at the top, playback controls right below the album art, and if you scroll further in the snapped view, you will also be able to access the playlist that’s being played. Classiness and smoothness- this app combines both these virtues into one solid package! 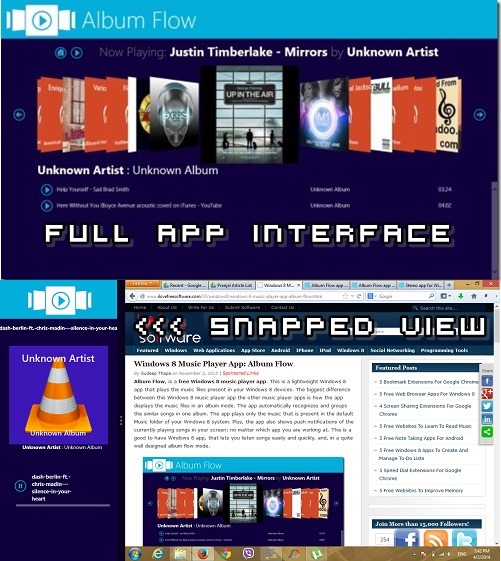 Album Flow is another good music player app for Windows 8 to have on your device. This app supports playback of multiple audio file formats, and can serve as a great lightweight app for playing music on the go. Before I get started with the features- let me first tell you that this app also only supports playback of music that’s present on your Music Library, and there is no file browser built into the app that allows for navigating and selecting the track that you want to play. Now. the features. The app has a very nice interface that shows the album arts of the music files in a flow style- if you have used an iPod touch or iTunes, you might be familiar with this kind of interface. The songs can be switched by clicking on the track that you want to play from the playlist that displays itself at the bottom of the album arts. The app supports docked view as well, and this works like a charm. In the snapped view, you will be able to see the album art of the track being played, and standard playback controls like play, pause etc. As a matter of fact, there is only one button to control play and pause operations: the play button changes to pause button when the track is playing and vice versa.

This app worked well on my device and I do recommend you to check it out!

So this concludes my list of 5 music player apps for Windows 8 that support snapped view. Which one is your favourite? Do let me know!