Album Flow, is a free Windows 8 music player app. This is a lightweight Windows 8 app that plays the music files present in your Windows 8 devices. The biggest difference between this Windows 8 music player app the other music player apps is how the app displays the music files in an album mode. The app automatically recognizes and groups the similar songs in one album. The app plays only the music that is present in the default Music folder of your Windows 8 system. Plus, the app also shows push notifications of the currently playing songs in your screen; no matter which app you are working at. This is a good to have Windows 8 app, that lets you listen songs easily and quickly, and, in a quite well designed album flow mode. 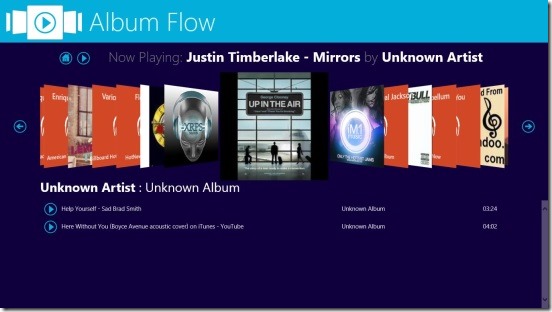 There’s no doubt that the app has a good design. All the albums are shown in big tile sizes, with the respective album cover (if available). The visual presentation of the album flow is the strongest point of this Windows 8 music player app. There’s a very smooth flow between the albums when you are browsing through the albums to find a particular song or artist. Simply use the mouse wheel, or click drag to left or right, in order to browse between albums. The app has very simple controls, and very few playback buttons. That includes the Play and Pause buttons. 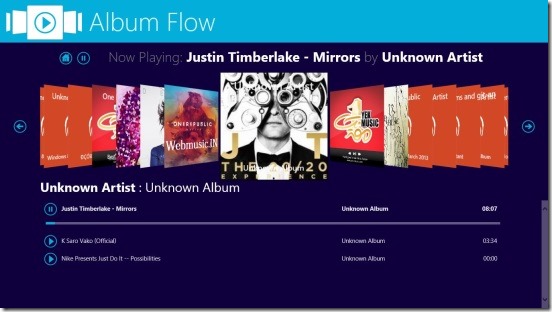 Like I said above, this Windows 8 music player app automatically recognizes the songs, and groups them under their respective albums. All you have to do is copy paste the songs in the default Music folder in your Windows 8 PC, and right-click in the app. Doing this opens a flyout at the bottom of the screen, containing Current and Sync buttons. Simply click on the Sync button to update the app’s library. The Current button in this flyout is to go back to the currently playing song’s album. Currently the app supports files that are in mp3 and wav formats.

A good thing about the app is, it automatically plays the songs that are present in same album, hence releasing you from manually playing each song every time.

You might also like checking this free Windows 8 social music player app using which you can share the playlist that you listen and allow friends to see and vote their favorite songs in the playlist.