Here is a list of 5 Best Free NFL Football Games for Android. These games are based on the National Football League of the US of A. While some of the Android games mentioned here have realistic 3D graphics, others are extremely simple to look at and have great gameplay. All of these free NFL Football games are engrossing and addictive at the same time. Scroll down and check them out!

And by the way, if you want to check out NFL apps to keep an eye all the latest ongoings and NFL Game scores, then you should head over to this article. 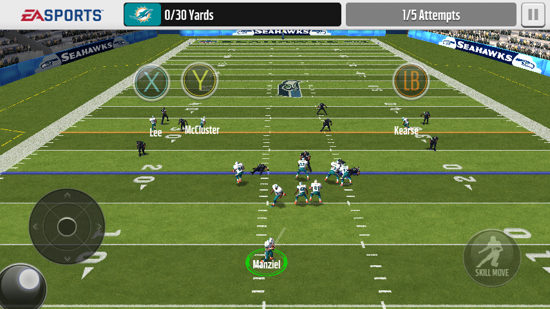 Madden NFL Mobile for Android is one of the most immersive NFL Football games for Android. Madden NFL lets you jump right into the action with great 3D graphics and intuitive controls. Once you open up the game, you will be walked through the tutorial where you will learn the gameplay and the controls. Madden NFL also has support for setting up teams and you will unlock players as you progress further. There is a joystick on the left for controlling movements, while an Action button for Skill mode, so that you can dodge a player rushing towards you. Madden NFL is available for free on the Google Play Store, so you should go ahead and give it a try. 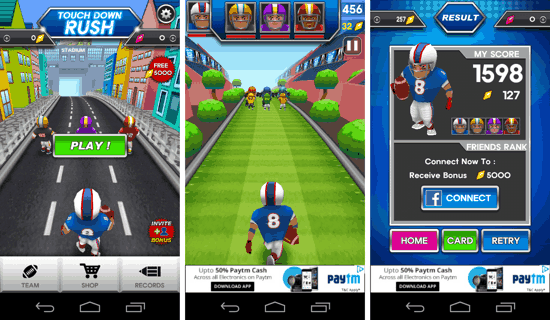 Touchdown Rush is totally different from the old formula of replicating the real NFL game as much as possible. Touchdown Rush is more of an endless runner with elements of American Football added to it. You are basically a player who has to run and dodge the other players and obstacles on your way — not too different from Subway Surfer, I’d say. But the game is really fun to play, and the NFL theme adds to the excitement quotient. There are a few small, but great additions to it as well, like the part where you have to pass the ball on to another player and then take control of that player and continue running. Touchdown Rush is meant for casual gamers and not for serious NFL games’ enthusiasts. 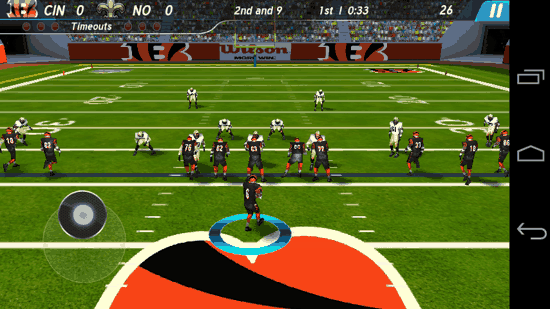 NFL Pro 2013 for Android is the most comprehensive take on NFL games. The game even tries to be a simulator, to an extent. NFL Pro 2013 lets you take the reigns of a team, and as you progress through games you can even manage your team, and unlock and add new players as well! The game has neat controls, and the graphics are top-notch. You can switch the camera angle whenever you like. NFL Pro 2013 is one game that can replace your ‘on-the-field’ NFL game, and a ‘Football Manager’ NFL game all within one app. Go on, take a look at it on the Play Store. Do stay informed that it has a pretty hefty download size as compared to other games on this list. 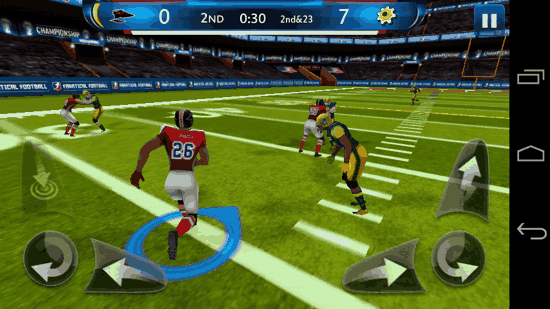 Fanatical Football for Android is another great NFL game which takes you right to the action. A fast paced gameplay and 3D graphics make this game a must try for NFL lovers. But the best part about this game is that you play in first person mode! You get overlay touch controls for dodging, tackling and sprinting. On launching the game, you will also get to select your team and then get ahead with a Quick game or Championship. Fanatical Football is of a smaller size than you’d expect from a title that offers this much. Head over to the Play Store and check it out now! 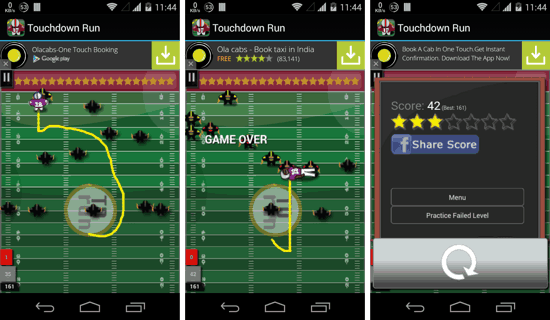 Touchdown Run is the simplest NFL Football game on this list. To be precise, this is more of a finger rush game, but the look and feel of the game gives it the NFL game vibes that you might be looking for. In the game, you basically have to get through the defense line of an opposing team by touching and dragging your player for touchdown. The graphics are really simple and the initial levels are extremely easy as well. But in the later levels, the defenses get pretty tough to get through. Touchdown Run is ad-supported and you can get it for free from the Google Play Store.

This list of 5 Best Free NFL Football Games for Android is hereby concluded. You can strike a conversation, and suggest any other such games that you like, in the comments section below!