And in the meanwhile, you can also take a look at this article to check out a great Automation app to make your daily schedule that bit more convenient. 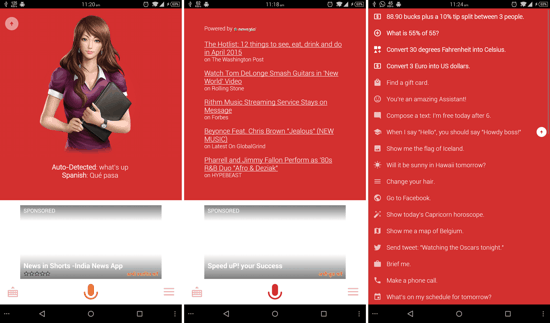 Assistant is one of the most advanced Android Personal Assistant apps. Assistant lets you take quick shot at anything that you want done. Whether it be asking queries, launching an app, getting a task on your Phone done, or performing a search; Assistant gets it all done, and more! It has an exhaustive list of commands that you can give, which can be accessed by swiping your finger from the right screen edge (as can be seen in the third screenshot above). You can also tweak other settings by tapping on the hamburger icon on the bottom of the screen and going to other in-app settings. You can set voice and shake triggers for Assistant and also customize different aspects of the app look, feel and sound, but the Free version has limited customization options. Functionality-wise, though, the free app is pretty much up to the mark and worth a try! 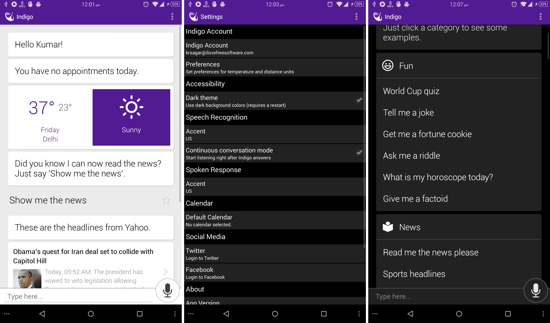 Indigo Virtual Assistant is another great option if you are looking for a simple yet efficient Android Personal Assistant. Indigo is named after the main Indigo-themed interface of the app. The app is extremely responsive to your Voice commands and even greets you with a message when you launch it, along with any appointments that you have on your Calendar. You will need to register for an Indigo account when you open the app after installation. To learn about the commands that Indigo can respond to, you just have to tap on the 3-dot menu button on top right, and select Features. You can ask it for Jokes, horoscope, factoids, News, and several other tasks! Indigo is available for free on the Google Play Store, and is among those apps that you shouldn’t miss. 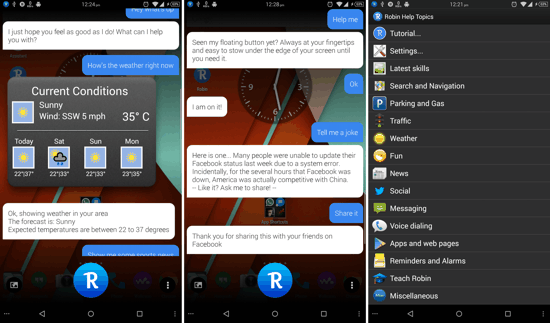 Robin – the Siri Challenger is another app that you should try your hands on. This Android Personal Assistant app has a somewhat different approach than the other apps on this list, and appears as an overlay over the screen (as can be noticed in the screenshots above). It understands most of the commonly used commands that you would expect from it. Tapping on the big R button starts your microphone for your queries. The Android Personal Assistant app can also hold a continued conversation in some cases. For example, in the second screenshot above, you can see that when Asked for a joke, I was shown one immediately and just after that asked whether I would like to share it or not. Speaking ‘Share it’, instantly opened it up in Facebook! Many device actions can also be performed in a breeze, and there’s also an in-app Settings menu (shown in the third screenshot above) which can tweak almost every aspect of this Android Personal Assistant app’s behavior! 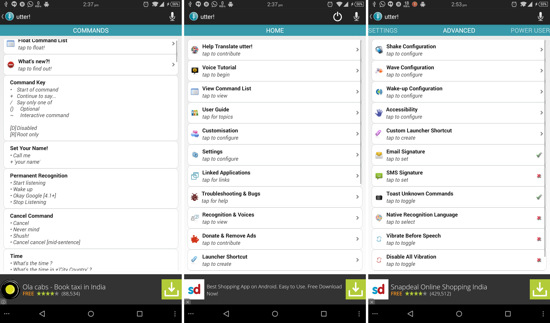 Utter! is probably the most feature-rich and customizable Android Personal Assistant out there. Utter has an exhaustive set of supported commands and responses which can be tweaked as per your wish. You can perform numerous actions just with your voice, and set up your own commands as well. Utter also has options for advanced users as they can even grant Utter the Superuser access, so that certain extra actions (like taking a screenshot with a voice command) can be performed within it. You can even tweak various triggers and the behavior of Utter. Do note however that Utter is still in Beta and hence there might be some occasional bugs here and there. But Utter is the most advanced Voice Assistant or Android Personal Assistant that you will ever use, and if you get past the exhaustive voice command list and complicated interface. Head on over to the Play Store and give it a try yourself!

5. Mr.Query -Siri for your thumbs 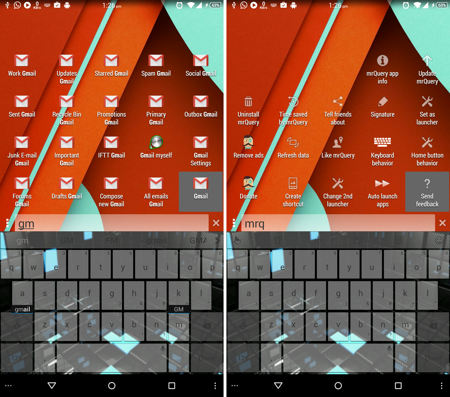 Now Mr. Query is one app which might or might not be termed a real Android Personal Assistant. But as the name states, it can surely be called your thumb’s personal assistant. The app is extremely simple in execution and hardly has anything extra to fiddle around with. While you normally have to open up your launcher, search for an app and then launch it, Mr. Query makes the whole process shorter by a couple of steps. You just have to tap home, and then on the Mr. Query main screen you have to type the name of the app that you want to launch, and it will come up in the search results along with all the associated in-app actions that can be performed directly (as shown in the first screenshot for Gmail). This is NOT EXACTLY a personal assistant, but rather an assistant for your thumb, and even I found it to be pretty effective after getting used to. Give it a try if you are looking to speed up your normal tasks that you perform on your Android device.

So this list of 5 Best Free Android Personal Assistant Apps has hereby reached its conclusion. You can go ahead and try them, and also share your thoughts in the comments section below!