HDDTurbo is a free hard drive RAM cache utility for Windows. It can be used to transform RAM memory into hard disk buffer cache memory. RAM memory is very fast, so by using HDDTurbo to turn it into cache for your hard drive you should be seeing significant gains in speed when it comes to writing data to your hard drive. Wear of SSD drives will also decrease if you switch to using RAM instead of its own memory.

This free hard drive RAM cache converter only works with 64bit Windows 7 and Windows 8 systems. Another system requirement is that you have at least 4GB of RAM. Screenshot down below shows us the only thing that you’re gonna see when running HDDTurbo. There’s no other windows or menus for you to change and tweak its settings. 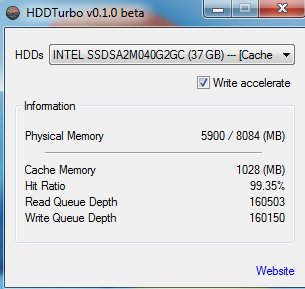 At the top you have a drop down menu where you can check and see the status of RAM cache for every one of your hard drives. Down below information about memory is showed. Total memory is showed, alongside the amount of memory that’s used for the actual hard disk cache, and various other info about the performance of the setup hard drive RAM cache.

Key features of HDDTurbo are:

The reason for having such requirements when it comes to operating systems and the 4GB RAM minimum is because HDDTurbo does take away memory from the system that it turns into hard drive cache. It might not take away a lot, but for those with 2-3 GB of memory installed on their system it could mean the difference between system freezes and normal operation. That’s also the reason why there’s only 64bit version, since 4GB systems for the most part have 64bit Windows installed.

Run HDDTurbo and it should setup a small section of RAM as your hard drive cache right away. How much of RAM is it gonna take depends on how much of it you have and of course how much of it is used. Don’t worry, this free hard drive RAM cache converter should leave you enough for whatever it is that you’re using with your system.

Use the drop down selection to switch between hard drives, if you have several of them, and see if cache switch has been made on all of them. Underneath the drop down menu at the top you can keep track of usage stats and turn off hard drive write acceleration made by HDDTune.

HDDTurbo is very easy to use but what it does is very useful and important for all those who have problems with slow hard drives. Try it and see how it goes.