UltraDefrag is a free open source disk defragmentation software for Windows.  Compare to the defrag tool that comes bundled with the Windows OS, the UltraDefrag tool has the ability to defrag any system files at a very fast speed. It can also defrag registry hives and paging file. 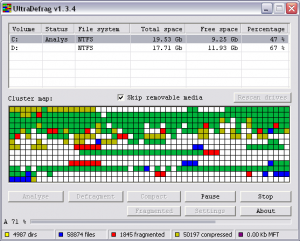 This powerful free disk defragmentation software will also defrag system files that are locked during the starting process of the Windows. The supported file systems include FAT 12, FAT 16, FAT 32, NTFS and UDF. This defragmentation should not be used on flash memory or SSD drives as there is a risk of reducing the lifespan of the drive.

Here are the features of UltraDefrag:

Disk defragmenting improves the life of your hard disk and frees up disk space. By going through the features of UltraDefrag, you can understand that it lets you do much more than the in-built defrag tool of Windows.