By Anvin on May 18, 2010 Media Players
Editor Ratings:
User Ratings:

Soundbase is a free music player for playing your music files. It is a very cool application that lets you to organize and listen to your favorite CDs as the way you store the CDs on the CD rack, per album and according to the album art image. 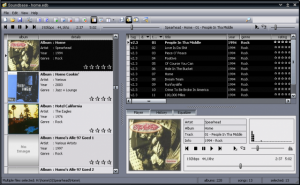 This free software makes use of Microsoft DirectShow which lets you capture and play multimedia streams at high-quality. It automatically detects the different kinds of audio formats and makes use of the audio acceleration hardware when it is available.

SoundBase might not have made its way to our list of 5 Best Free Media Players, but it still crafts a place for itself.

Soundbase also lets you edit tags of various formats such as aac, mp3, mp4, ogg, ape, flac, aac and and wma.  It also provides you with tag based folder structure to organize your songs by moving or copying.

If you want to automatically add tags to your media files, you can use SoundMaven.

Soundbase lets you organize your CDs just the way you do it on your CD rack, or as per the album and according to the album art image. This ensures that you do not need a separate music organizer. Another media player that integrates music organizer function is Jaangle.

Here are the features of Soundbase

Unlike some media players like RealPlayer or Winamp, SoundBase does not integrates with your portable music players. For that, you can use iTunes alternatives.

You can make use of this application from any place as it works anonymously. It does not make use of any registry entries and all the settings are stored in ini files. The extensive help section gives you access to frequently asked questions, screenshots and tutorials.