MyDefrag is a completely free software to defragment your hard disk. It even optimizes the hard disk usage by intelligently putting the frequently used files towards beginning of the disk. It also rearranges the files so that the files that are used together are located together on the disk. MyDefrag is completely free to use, and comes with a very easy to understand interface. 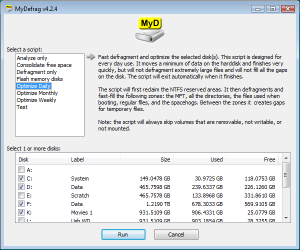 Here are some of the features of MyDefrag:

MyDefrag is a good defragmentation software that can be regularly used to keep your hard disk fast. If you just want to defragment selected files and folders, you can try Defraggler, and if you are looking to defragment your registry, you can try Advanced System Care Free.