AVG Antivirus is a world renown security software which is installed on millions of computers around the world, with millions of satisfied and secured computer users, which AVG protects from various different online threats like viruses, trojans, adware, and all the other types of malware that exist out there. Recently AVG has released AVG Security Suite 2013, both free and commercial versions. Most notable update is the new interface that AVG sports, which now has the same type of design that the new interface of Windows 8 has, but a lot of changes happened under the hood as well. 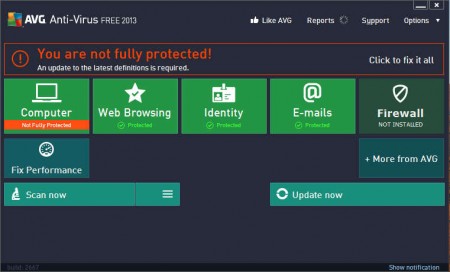 Free version of AVG Antivirus doesn’t have all of the features that the paid version has, which is to be expected, but like you can see from the screenshot above, it also experienced an overhaul and it now has a completely redesigned interface. Windows 8, whose official release is very near, also comes with a new user interface style which focuses on tiles. AVG Antivirus Free 2013 does the same thing and you can now see tiles representing various different security modules that AVG has in the main menu. Cool new features and security tools found in AVG Antivirus 2013 would be:

Commercial version offers more features, two most interesting would be firewall, which has it’s own tile in the free version as well, but if you click on it you’ll be brought to the upgrade page where you’ll be able to purchase the commercial version. Banking information protection is the other very useful feature of the paid AV Security Suite 2013 version, which is gonna create a secure bubble for when you’re entering delicate banking information online, usernames, passwords and pins. Free version should be enough though, and if it’s not you can always install third party security software to complement what’s missing.

Installation went fine, we used the online installer, which meant that we needed to have an active internet connection, but if you need to you can also download an offline installer, follow this link and you should find the updated offline installation file for AVG 2013. If you don’t want toolbars installed, make sure to uncheck them during the setup wizard, otherwise they are gonna be installed. A lot of you are probably now wondering what kind of resource usage AVG has, since it has the new interface, is it higher? Well to our surprise we discovered that it spends even less than previous versions, that’s at least what we noticed on our test machine. 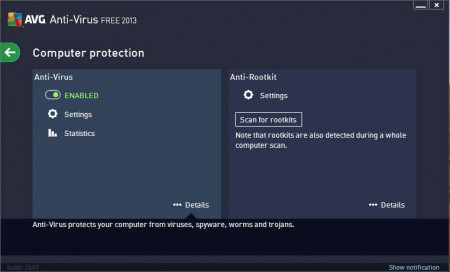 In this menu you can check on the status of the resident protection, to see if it’s enabled or disabled, as well as check settings for it. On the right you can also activate a rootkit scan which is gonna check for any signs of rootkits, which are a dangerous type of malware that has special ways of avoiding detection and continue to cause damage to your system. For this reason it’s a good idea that you run rootkit scans more frequently, next to the ones that are gonna be run during the usual system scans. 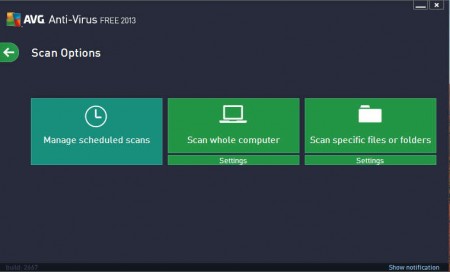 Scanner can be activated if you click on the Scan Now button from the main menu. That’s gonna activate the scan right away, but if you want you can click on the settings icon next to the Scan now button, after which you’ll be able to see the scan type selection. The usual selection of scans is available specific folders, the whole computer and scheduled scans.

Browser attacks are gaining more and more popularity with malicious hackers who are using them to infect unsuspecting users. Usually these types of attacks can be avoided if you disable Java which is used the most in order to spread attacks. However if you cannot disable Java, if it’s important to have Java for your work, and it cannot be disabled, you can rely on Web browsing module to protect you. 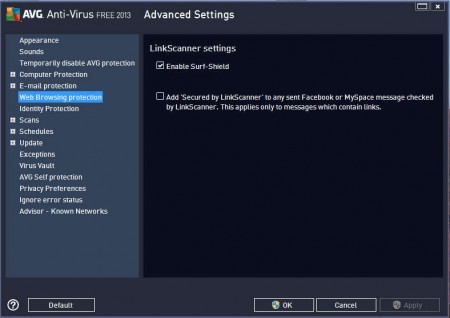 Link Scanner is gonna be the thing that helps you out the most with protection while surfing. Each time that you see a link in Google, or receive a Facebook or MySapce link they’re gonna be cross referenced with the AVG database of links and you’ll be notified if they are safe or not.

Identity protection that AVG has is useful when you are exposed to threats that would like to steal important information about you. Our identity is always under attack every time that you open up the web browser. Luckily with the Identity protection which can be found in AVG you’ll be protected all the time. It works the same way that the resident protection works. Scanner will be monitoring everything that you do and it’s gonna notify you in case that you do something which could cause your identity to be exposed and stolen. 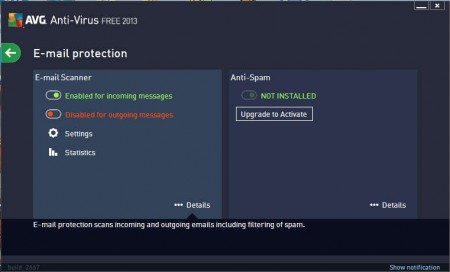 Spam filtering is also included in the free version of AVG, and the interesting thing about spam protection is that not only that there’s filtering of incoming messages, outgoing messages are also gonna be checked. Usually other programs which are fighting spam only scan incoming messages, which is a good thing. Email scams are increasing all the time, and having protection for yourself is a great thing, but with outgoing email filtering you’re not only protecting yourself, you’re also protecting others. 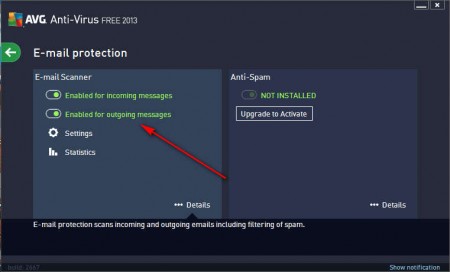 It’s a known fact that malware uses it’s victim’s computers in order to spread itself even further. It can use your instant messaging clients to send messages where your contacts are fooled into download and infecting their own PCs with malware. Something similar is done with emails, there’s malicious programs out there which are using emails in order to send not only spam, but also to spread infections, this is where outgoing email scanning offered by AVG comes in handy. It’s gonna check every outgoing message that you decide to send in order to make sure that there’s no malicious code hidden somewhere either as an attachment or in some other way, direct link perhaps. By default outgoing scans will not be activated, to activate it, you’re gonna have to click on the Enabled for outgoing messages button to make it green, which means that it’s enabled, see image above. Once you do that, you’re protected for both incoming and outgoing spam, protection for both you and the people you know and are in contact with over the internet.

To access the PC Analyzer component that AVG has you’re gonna have to click on the Fix performance tile while having the main window open. System optimization became a part of AVG Antivirus Free in the previous yearly update, the 2012 version and with it came some very useful tools for which you would normally have to have additional software installed on your computer. 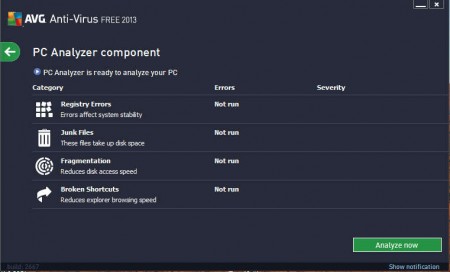 A total of 4 tools are offered, which you can use in order to find and get rid of system problems which could cause performance issues. Maintenance is something that a lot of people neglect, now it comes integrated into your antivirus software. You get utilities to fix:

Click Analyze to start checking if and what kind of problems it is that your system has. A nice little graph is gonna be displayed next to each one of the problems which are gonna point out the severity of each issue: 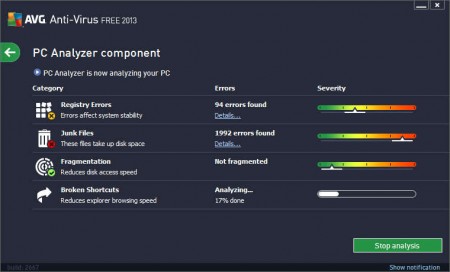 After the scans finish, click on the Fix now button which is gonna appear and the computer should start getting rid of all the errors which were found. Details can be viewed by clicking on the Details link in the errors column.

AVG Antivirus Free comes with a refreshed look and also a significantly improved user experience. It now works much faster, with less resource usage, even though the interface has been modernized to increase similarities with the new Windows 8 design. 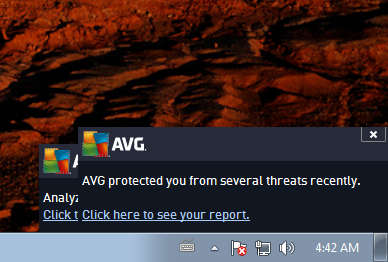 Tray icon is still gonna be there, and notification applets which are gonna be reporting you with all of the important threats and protection statuses. As the name of the program suggests it, AVG Antivirus 2013 Free is free, it costs you nothing to download it and try it out, so why not give it spin, you have nothing to lose.