Lavasoft has been at first known as being the creators of the famous free anti-spyware software Ad-Aware. Since it was free, like Ad-Aware Free Antivirus is now, a lot of people from all over the world were using it. Now the free anti-spyware program has evolved into full-fledged Internet security suit, but it has also lost on its popularity which is no surprise considering how many different competitors there are who have cemented their positions when it comes to popularity and Ad-Aware might have problems with gaining a larger user base. 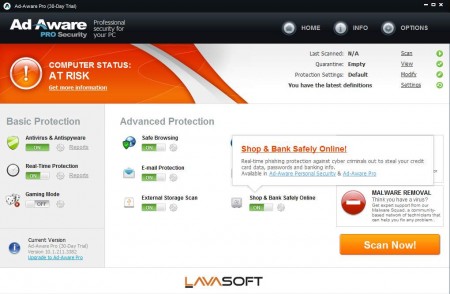 Ad-Aware Free Antivirus has a surprisingly small download size of only 10MB, which is great for all those who might not have access to broadband connections. Installation went fine, of course there was the usual promo step where we were offered to place Ad-Aware as our homepage and install toolbars, you know how it is, uncheck these options if you are not interested in them. 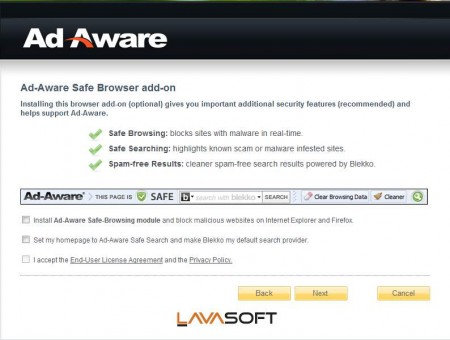 Program was installed relatively fast, but then again this depends on the computer speed, not on the program itself. After installation you’re gonna have to restart you PC in order for the system to become fully protected and all the service of Ad-Aware start running.

According to the Lavasoft website Ad-Aware Free Antivirus offers some very impressive protection. It has features similar to that of Avast AV but it comes in a smaller package, so to say (Avast installation file between 50-80MB) not that size matters, just saying:). Some of the things that are offered in Ad-Aware Free would be:

Looking at the image of the default window above you’ve probably noticed that what we get after installing the free version of the program is a 30 day trial of the Pro version. There are 2 different paid version of Ad-Aware Antivirus, Personal and Pro. They are paid monthly 1$ and 3$, respectively, and they get the following advanced options:

and more. The basic protection that you get with the Free version is more than enough, and those things that you don’t get in the free version can be easily replaced with other free security software.

Overall the program works fine, updates have smaller size which is great if you do not have high-speed Internet or a lot of bandwidth from your Internet service provider. Memory footprint of Ad-Aware is more than satisfying, while idling, when only the resident protection is running program takes up less than 5MB of RAM, if you don’t believe us look at this screenshot: 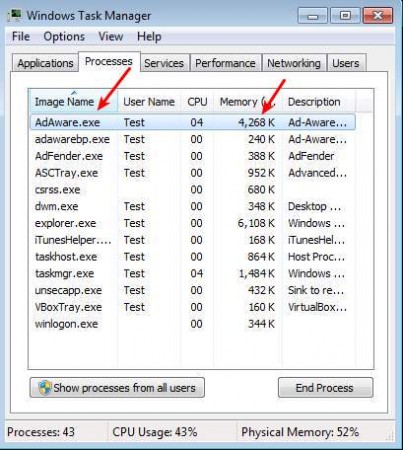 Amazing stuff, perhaps people with older machines should consider using Ad-Aware Antivirus, because it’s very light and it shouldn’t impose on your computer experience like other antivirus software probably would.

What about Ad-Aware Antivirus detection rate, is it good?

Tests that we’ve conducted with files which are detected as infections by all the other major antivirus software like AVG, AVira and Avast showed that Ad-Aware detection rate isn’t at all lacking behind the big shots. 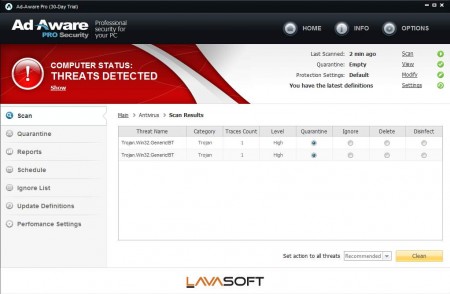 Infected files were detected even without us setting the program up for a file scan, which means that the resident protection of Ad-Aware is working fine and it will offer you proactive protection by blocking infected files even before they are executed or downloaded.

Next to being good antivirus software, Ad-Aware also provides you with protection against spyware. Spyware protection was the original purpose of Ad-Aware, like I already said. Developers have built up on anti-spyware and created a wide-set of other security features, which are now making Ad-Aware a great antivirus alternative.

Scan with Ad-Aware option has been added to the context menu, which makes individual file scanning a lot more easier. 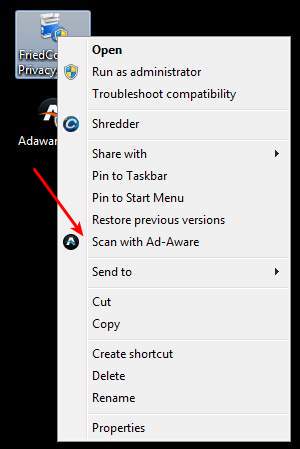 If you are puzzled why there isn’t the Run in sandbox option there, even though it was said that Ad-Aware supports it, the way that Ad-Aware sandbox works doesn’t require user interaction and input. Ad-Aware automatically decides which programs might be harmful and then creates a virtual environment where this potentially malicious executable is run. Having such sandbox behavior is a great move by Lavasoft, because sandboxes can be confusing to users. Avast has its own sandbox and while it does work, it’s constantly bothering the user with input, with questions like is this program safe and how to run it. Ad-Aware does all this for us, and we don’t have to worry if a particular file could be a virus, because essentially we don’t know, that’s why we have antivirus software installed.

Gaming mode is present which works the same like with any other AV, resources consumption is lowered while the user is in a game. Considering how low the resource consumption of Ad-Aware is in the first place, you’re probably not gonna need the gaming mode, not unless you have a very old PC.

Ad-Aware is surprisingly good antivirus software which comes packed with a lot of advanced options, the same if not better options which programs like Avast, AVG and Avira have to offer. You can get even more if you decide to go for the paid versions, whose price isn’t very high, you could say that it’s symbolic, only 3$ monthly for Ad-Aware Pro Security which offers everything even a firewall. If you are looking for a new antivirus protection then you might want to consider Ad-Aware, start with the free version and if you like what you see, move your ways up to the Pro versions.