AVG has recently launched AVG Free Antivirus 2012. This is an upgraded version of their popular free antivirus; one of the most popular Free antivirus in the world. Unlike normal upgrades, this version of AVG Free comes with substantial improvements in terms of performance, as well as well as virus detection. For example, special features have been added to fake antivirus; which have been a popular threat lately.

Here are Some of the Features of AVG Free Antivirus 2012: 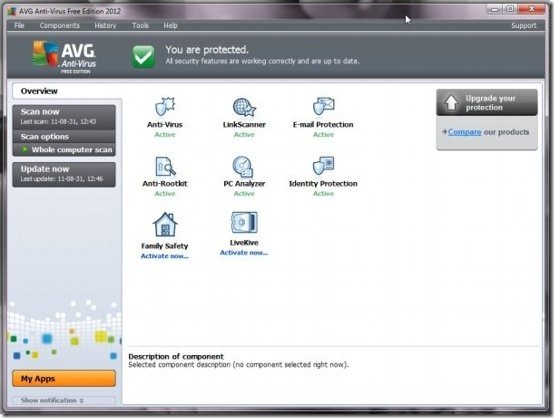 Reduced Memory Consumption: As per AVG, the AVG suite earlier used to run 16 processes, and now runs only 11 processes. This means it uses considerably lesser memory than the previous versions of AVG. This is very good, as it means you PC won’t feel sluggish while AVG is running in the background.

Monitor memory consumption of browsers: Another interesting feature that have been added in AVG Free 2012 is that it also monitors memory consumption of browsers (IE, Firefox, Chrome). When browsers start consuming lot of memory (because of lot of tabs being open), it suggests you to close the browser, and then start it again. I am not sure why AVG thought of including this as a feature in their free antivirus software, but nevertheless, it is a good feature.

Reduced Hard Drive Space consumption: AVG has also reduced the size of virus signature file by as much as 40%. This means that it takes much lesser hard drive space than previous versions. Personally, I am not very bothered by hard drive space usage, because hard drives have been becoming bigger and cheaper; and I can anytime optimize hard drive performance.

Detect Fake Antivirus: This is my personal favorite in AVG Free Antivirus 2012. It detects fake antivirus, and blocks them. Similarly, it blocks ransomware as well.

Improved LinkScanner: Another notable improvement in AVG 2012 is improved Linkscanner. It has now better detection of malicious websites, and also detects dynamic code.