8Stack is a free launcher app for Windows 8 designed in a Windows phone like UI. The application is very nifty, and if you have had any experience with using the Windows Phone OS, you will feel at ease with 8Stack, because it is designed in a very similar fashion. The app when launched sticks to the right side of the screen and contains categorically sorted icons for applications. The app is very lightweight, and takes up very little system memory.

The app contains links to most of the software that you would use in your day to day life in an out-of-the-box state, and hence no customization is really required. The app works best when pinned to the Windows 8 taskbar, because you can launch it easily from there.

8Stack is a good launcher for your Windows 8 device, and cuts down on the need of launching your Start Screen for simple tasks of opening the apps.

Features of this App Launcher for Windows 8:

8Stack is a neat little applet that acts as a launcher for launching various applications on your Windows 8 device. The app makes sure to make the task of running the apps a very easy task. When you download the app and launch it, you will see a launcher fly out from the right side of the screen. This launcher contains various categorically sorted app icons, as can be seen clearly in the screenshot below. 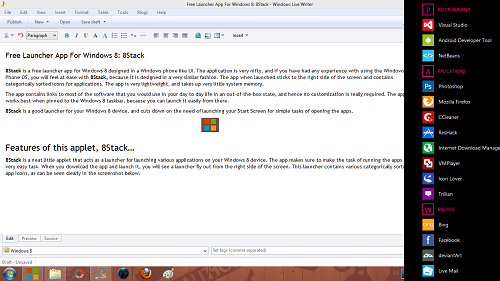 In the above screenshot, two things can be seen very clearly: one being that the launcher flies out from the right side of the screen, and takes up a minimalistic screen area, and the other being that the application icons are sorted categorically. Now let’s take a closer look at this launcher.

In the above screenshot, you can clearly see that the launcher has categorically sorted apps. The various categories that can be seen in the above screenshot are Programs (contains a list of several programs that might be used frequently), Applications (contains a list of useful Windows 8 applications), and Websites. Clicking on any one of these options will launch the task that it is assigned. For instance, if you click on any application, it will launch that application, and if you click on any website, it will launch that particular website inside your default web browser.

TIP: Pin the launcher to the taskbar by dragging the launcher icon onto the taskbar. Make sure that it is the first icon on your taskbar from the left (which can be done by dragging and repositioning the icon). Once it’s done, you can launch the launcher by using the Win+1 shortcut on your Windows 8 device. (The Win key is the button on your keyboard with the Windows flag/logo on it.)

This is all that is needed to be known to start using this applet as a launcher for your Windows 8 device. The app is lightweight, and nifty and handy at the same time. It’s incredibly smooth to work with, and makes your life a lot easier by saving you the trouble of opening up the Start Screen simply for launching an app.

I hope that you will enjoy using this app.

And remember, there are many other launchers as well that you can try out, if you don’t like 8Stack. Pokki is especially good.

8Stack is a tremendous effort at simplifying the user interface of Windows 8. Although a lot of improvements can be done to make it better, I like it the way it is as of now because it really helps a lot for launching an application quickly. Although I miss the functionality of easily adding apps to the launcher, the app is good the way it is.

Get 8 Stack for your Windows 8 device.