An app launcher is a software that makes it easy to quickly launch applications. Application launchers provide better functionality that standard Windows start menu. Some of the app launchers can open files and folders as well, and some can launch websites too.

Here are 15 of the best free application launchers that we have come across. All of these app launchers are completely free, and simple to use.

Launchy is one of the most popular app launcher. In fact, I was introduced to the concept of app launchers by Launchy only. Launchy can be launched by customizable hotkey. To launch any application, just start typing few words of of name of application, and Launchy will immediately launch it. You can change skins of Launchy, and also launch files and folders with this.

FARR (Find and Run Robot) is another free app launcher that works a lot like Launchy. FARR provides some additional features by virtue of plugins. Like Launchy, FARR can also open all type of applications, as well as files and folders. It is fully skinnable. 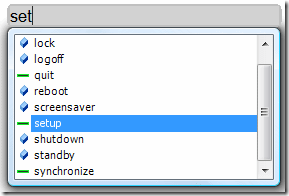 Promptu Launcher is another free application laucher. This one also works a lot like Launchy, and provide similar features. Promptu Laucher lets you create custom commands easily. So, you can type your command, and Promptu Laucher will run the associated application. Promptu Laucher is under active development, and will soon launch API to support external plugins.

LaunchBar Commander is one of the most advanced application launchers that I have come across. You can create your own hierarchical menus, and create multiple docks. However, it might become a bit overwhelming for everyday user to customize this, but this will definitely be a treat for power users. 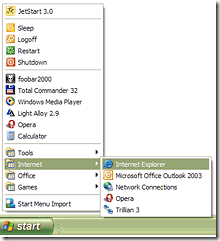 JetStart is not just an application launcher. It is actually a replacement for Windows start menu. JetStart lets you create your own start menu with your own programs added to categories. Apart from that, you can launch programs by typing their names. And JetStart Toolbar lets you organize your shortcuts in form of tabs.

ObjectDock is a really nice looking app launcher. I prefer to call ObjectDock the Mac style toolbar for Windows. ObjectDock displays your currently running programs, lets you add shortcuts, and  you can add widgets like weather too.

RocketDock is another Mac style toolbar for Windows. It is a floating bar that lets you launch applications with just one click. You can change the skins of RocketDock, and enhance functionalities using Add ons. 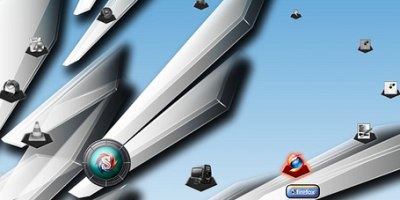 SliderDock is a fully customizable app launcher. You can control the layout, icons, and the shortcuts that go into that. SliderDock looks really pretty on your desktop, and makes it extremely easy to launch applications.

CircleDock is another circular app launcher. CircleDock lets you organize your icons in form of concentric circles, and ellipses. You can have the circles look vertical, or horizontal (as the screenshot above). This gives you a really intuitive way to organize tons of icons in a very small space on desktop. 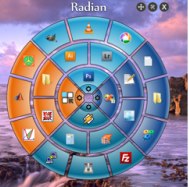 Radian is another circular app launcher like CircleDock. However, it gives one added advantage of using 4 different colors on 4 sections of Radian. This gives an easy way to organize similar applications together. To launch an application, just click on its corresponding icon on Radian.

Appetizer is another simple app launcher for Windows. I really like the simplicity of Appetizer. You just add icons to it, and click on any icon to open the corresponding application. You can add folders also to this. The icons can be of three sizes: Small, Large, Extra Large. You can also change skin of Appetizer, and enhance the functionality with plugins.

nDroid is a very advance app launcher. It is a lot like Launchy, but has a lot more features. You can lauch application, folders, play songs, add songs to playlists, and even do Google searches; all by typing in just one box. You can even enter a mathematical expression, and nDroid will calculate it.

SpeedSearch is a free app launcher from Microsoft. It is a bit like Launchy, but it makes it extremely easy to add any application to the shortcut list. Just drag the icon, and throw it in the Bull’s eye on desktop. To launch an application, just type its name, or click on the icon to launch it. 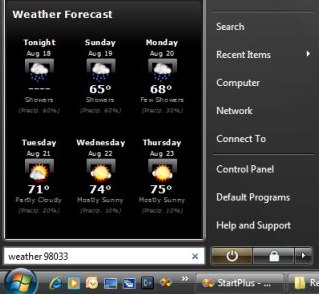 Know of any other good app launchers out there? Do mention in comments.