Here is a list of 5 free apps to Auto-Backup Photos in Android. These apps will auto backup photos on Android to their respective cloud accounts in the background so that you do not have to remember to back them up manually. All these photo backup apps also come with enough free storage space to get you started, to be more precise, the apps in the list below offer anything between 3GB and 1TB of free storage space! So check out these apps now, and start backing up your precious photos!

And by the way you can also take a look at this article if you are searching for apps to backup other data from your Android device as well. 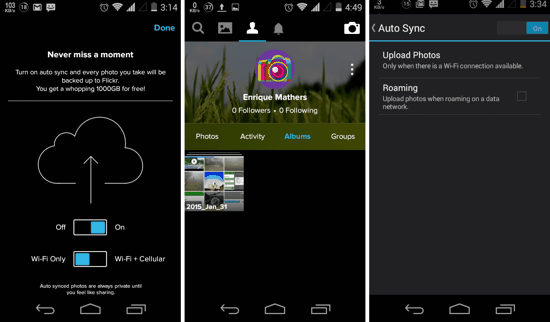 Flickr is probably the most popular community for Photos. The official Flickr App for Android is also based on the same simplistic design principles. Not long ago, Yahoo also bumped up the free storage limit to 1TB! And well, that’s exactly when Flickr might have become the primary Cloud Backup account for numerous users. The official Flickr app has support for Auto-backup of Photos as well; so neither do you have to worry about storage space, nor would you need to manually take care of the backup. The first time that you open the app and sign-in, you will be asked whether you want to Enable the Online Backup for your photos or not. You can also choose to Backup only when you are charging your device and connected to a WiFi network. 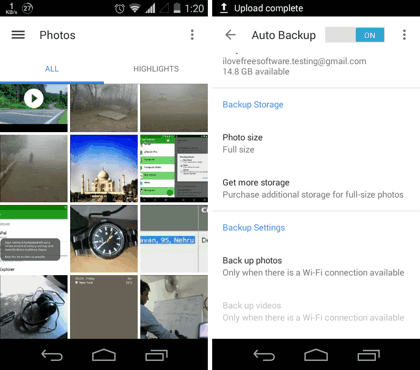 Google+ Photos is a great app for automatically backing-up your Photos without applying any efforts whatsoever. Google+ is installed by default on almost all Android devices. And in fact, it now is the default gallery app as well, so it’s really convenient to back up all your photos. Google also provides you with 15GB of free Online storage for your photos and videos. You can tweak the settings for Auto Backup and see the available free storage space within the in-app Settings menu. Another nice feature in Google+ Photos is that it automatically notifies you if it detects a new folder with pictures in it, and asks you whether to include it in auto-backup or not. 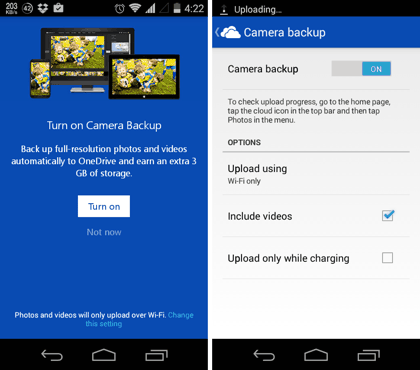 Microsoft has been bringing refreshed versions of their apps on Android lately, and OneDrive (formerly SkyDrive) was among the first ones to the party. The Android app will let you backup your Photos and Videos over WiFi and only when you are charging your device, that is, if you want it that way. Microsoft offers you a total storage space of 18GB (15GB default + 3GB added when you login to the Android app and turn ON Camera backup). But at the time of writing, I in fact got 15 GB extra instead of 3GB, and hence the total storage space in my Onedrive account is now 30 GB! This 15 GB extra free storage is an offer which is supposed to be defunct now, but worked on multiple other phones when I tried; so grab this before it ends. 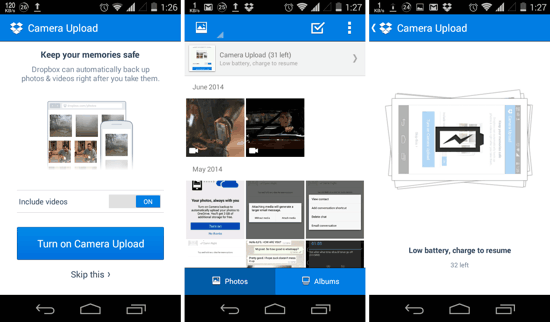 Dropbox is one of the most popular Cloud Storage services and obviously has an official app on Android as well. Dropbox for Android also has integrated auto-backup feature for photos from your Camera roll. The moment that you install Dropbox and login to it, you will be asked whether you would like to enable the auto backup functionality or not. You can enable it, and Dropbox will then take care of almost all your on-device photos and videos in your Camera folder. But do remember that Dropbox only provides you with 3GB of free storage (though, there are ways to get more), so you will need to utilize that judicially as well. And of course, if you plan to use Dropbox only to backup photos and videos, and not other core Dropbox features, then you might want to actually go with Carousel, the specialized app from Dropbox that is a pretty good alternative to the default Gallery app, and lets you auto backup photos and videos to Dropbox. 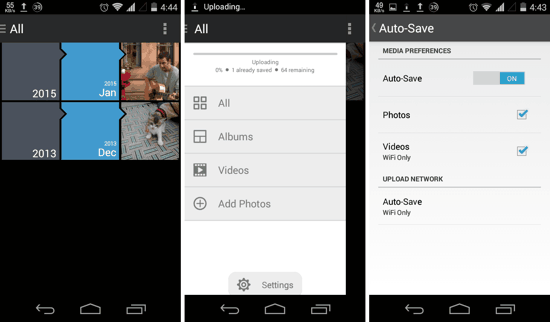 Amazon Cloud Drive for Android is another good option if you want to automatically backup your Photos. Amazon Cloud Drive gives you 5GB of free online storage space for your Photos and Videos. Once you install the app and open it, you have to go to In-App settings -> Auto Save, and select whether you would like to back up photos and/or videos (shown in the third screenshot above). Any current ongoing uploads will be shown in the slide-out sidebar as you can see in the second screenshot. The app has recently got an update which tweaked and improved the interface, so give it a spin yourself and see whether you prefer it over the others listed here!

That’s it! I will now conclude this list of 5 free Apps to Auto-Backup Photos in Android. I might have missed some great service or app, so you can always head to the comments section below and mention those. See ya around.