Dropbox is always at something new. The highly popular online cloud storage cum file sharing service has just launched Carousel, a mobile app for iOS and Android, aimed at being a one-stop solution for archiving all your digital photos. Carousel displays all your photos stored in your Dropbox account in a vertical list, separating them by the dates they were taken. It has some really nifty sharing features baked into it as well, and you can share your photos selectively or collectively. The app is now available for iOS and Android devices, and can be downloaded from their respective app-stores. But just how good is it? Read on to find out more.

NOTE: This is not a full review of the app, it’s more of a quick hands on. Let’s see how the iOS version of Carousel works with an iOS device (an iPhone 4S, in this case) running iOS 7.1.

The installation is a standard affair. You can simply go to the App store, search for the app, and install it. There’s nothing more to it. However, since Carousel is a Dropbox service, you need to have a Dropbox account to use it. If you already have a Dropbox account and you use the official Dropbox app on your iOS or Android phone, the app will directly sign you in, taking your credentials from there. At the sign in screen, Carousel asks for your permission to automatically backup your photos from your device’s gallery. You have to allow this access, as you can’t proceed without it. 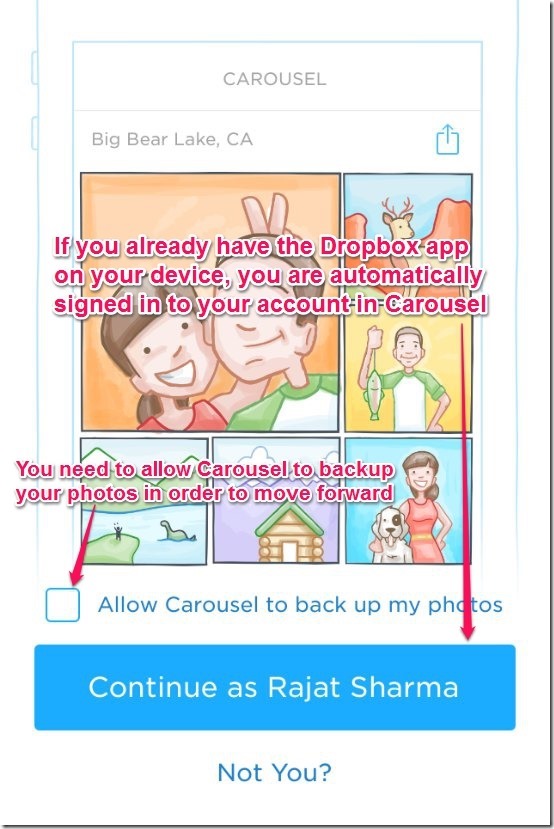 Once you’re signed in, Carousel takes a moment or two to access and set-up all the photos that are saved in your Dropbox account. Once that’s done, your photos appear as a vertically scrollable list, with the photos taken on a particular date (using the EXIF metadata) separated into distinct sections. Each section has a header that lists the date on which the photos were taken, and  quick share icon on the right of the date.

The photos can be viewed by swiping up and down the screen. However, Carousel also has a really cool looking horizontal slider at the bottom, which gives the impression of a Control knob viewed from the side. It’s marked with years, months etc. and can be used to quickly access photos taken on past dates.

Check out the screenshot below. 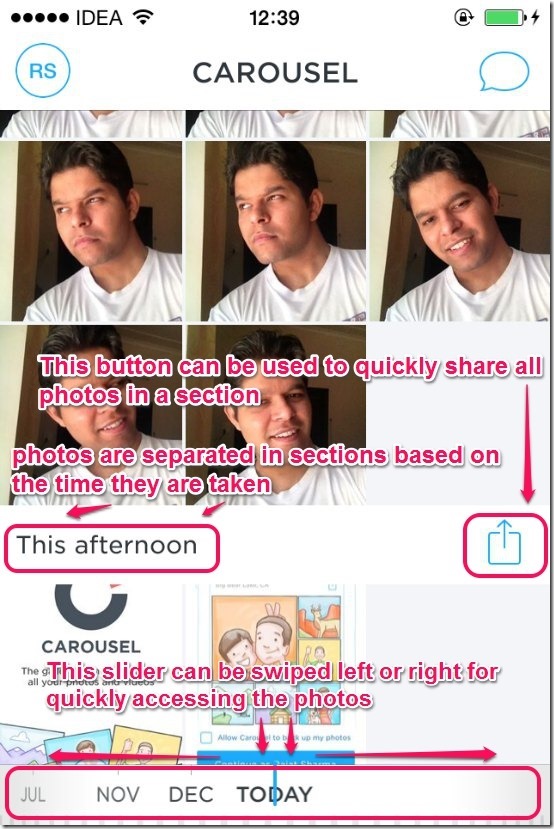 Sharing is one of the most important features touted baked into Carousel. The photos can be shared either individually or selectively. You can even directly share a complete section consisting of the photos taken on a particular date via the direct button on top right of each section. Here’s how it works

Step 1: Navigate to the section whose photos you want to share by swiping up or down (or using the horizontal bottom knob slider). Once there, click the share button at the right (Check screenshot for reference). 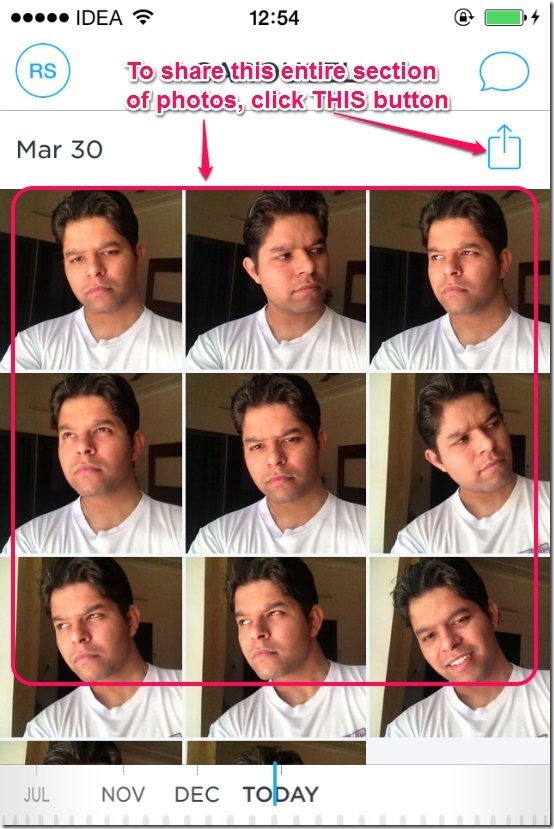 Step 2: Once you tap on the share icon, all photos in a section are selected by default for sharing. If you want to share only some photos selectively, you can do so by tapping on individual photos and selecting/de-selecting them via Blue checkmarks. Once that’s done, tap on the word SHARE on the top right corner (note that you can also cancel the sharing by tapping the X icon on the top left). 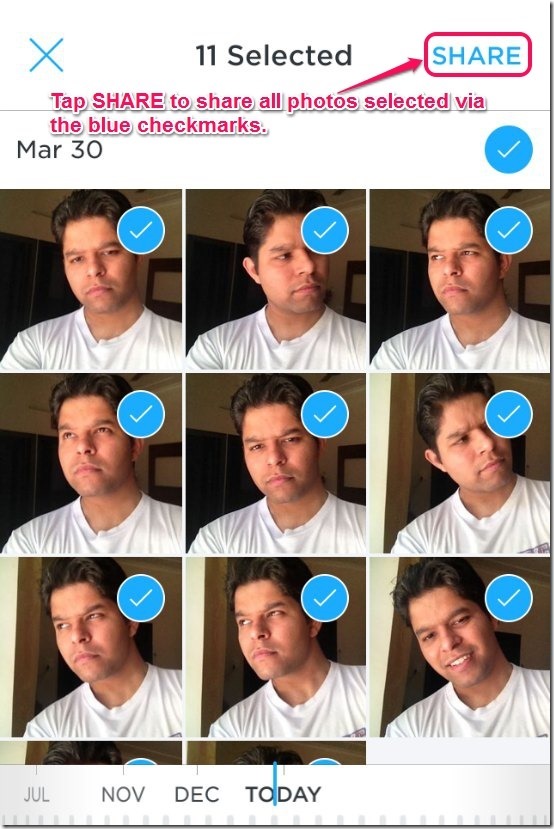 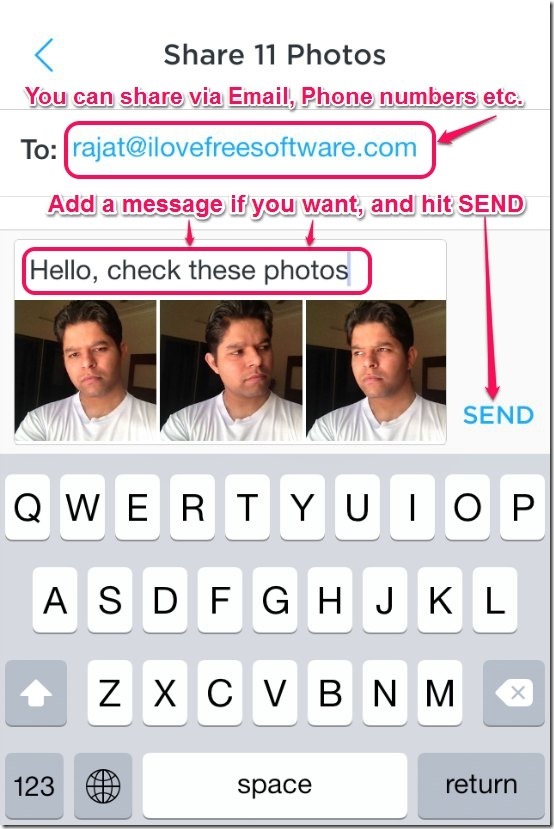 NOTE: If you want to share your photos with someone who doesn’t have a Dropbox account and/or the Carousel app installed, you can sure do that, but the way this is achieved is kind of unintuitive.

If you just enter your recipient’s Email address and hit SEND, they just recieve a notification that some photos have been shared, and they have to download Carousel to their smartphone(s) to access those photos.

However, if you use iOS’ Mail App (accessed from Carousel by hitting the three dots at the top right in the To field, and then tapping the Mail icon), Carousel generates a unique link with a small preview of your shared photos, which is then shared with your recipients via Email. Not exactly convenient, if you ask me! Your friends can open that link online to see the photos that you shared, as well as download them.

Even though it’s in its first iteration and just out, Carousel seems to be a pretty solid app for sharing and archiving your digital photos. However, the number of photos is limited by the capacity of your Dropbox account, which is a bummer, especially considering the fact that competing services like Flickr offer a mammoth 1 TB of free storage space. Besides, Dropbox’s native app already has a section for the photos stored in your account, so using Carousel just because it prettifies (and speeds up a bit) the way your photos appear and are shared sounds absurd initially.

Another obvious missing feature is option to create folders / albums. Also, you cannot selectively sync photos with Carousel, and it will sync all the photos / videos on your phone. So, if you have some photos that actually you don’t want to be backed up, you can’t do that; they will still use the ever precious Dropbox free space.

I hope this app does better in next version.