Windows has included a native calculator program since its early days, and the freshest Windows 10 is no different, having it as a modern, universal app. In fact, the Windows 10 calculator app is one of the most handy and powerful built-in apps. It includes multiple calculator modes, and detailed calculation history. But that’s not all. Windows 10 calculator app even includes a comprehensive unit converter, that lets you convert everything from volume to power to angle. Sounds interesting? Keep reading past the break, it surely is.

The calculator app in Windows 10, like all other system apps, is a universal one. It sports a modern UI that, when maximized, automatically scales to the current display size. Now, the app itself is divided into two major sub-sections, namely calculator and converter. Both of these, as well as their sub-components can be conveniently accessed via the hamburger button/menu on the left. Take a look at the combinatorial screenshot below: 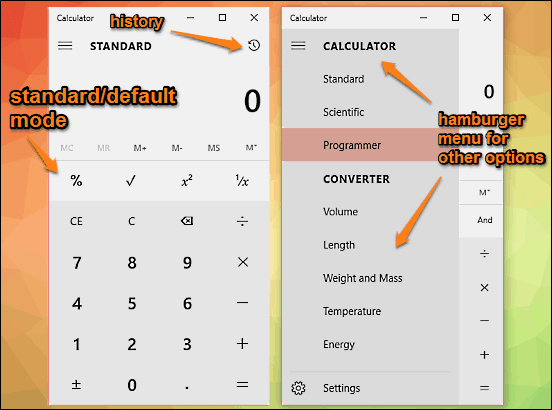 In the above image, the standard/default calculator is displayed on the left. It consists of numeric keys, as well as keys for basic arithmetic operations, and memory management options. There’s also a history button on the top right corner, which can be used to view the recently performed arithmetic operations. Clicking the hamburger icon on the top left corner reveals a scrollable menu, illustrated on the right. As evinced by the screenshot, it can be used to access the other two calculator modes (scientific and programmer), and switch to the unit converter mode (and its sub-categories).

How To Use Scientific And Programmer Modes In Windows 10 Calculator App?

The standard calculator is the default mode of the Windows 10 calculator app. However, if you’d like to do some complex calculations, you can use the scientific and programmer modes. While the former gives you access to trigonometric, logarithmic, and modulus functions, the latter can be used for logical functions, access bit-toggling keypad, and then some more. As far as using these two calculator modes are concerned, things are pretty simple. All you have to do is enter the input values (either by clicking the required keys with the mouse, or by pressing the corresponding keys on the keyboard). The display shows the result of the most recent calculation, and in case of calculations involving multiple operations, the same can be viewed via the directional arrows. Here’s a combinatorial screenshot, displaying the scientific and programmer modes in action: 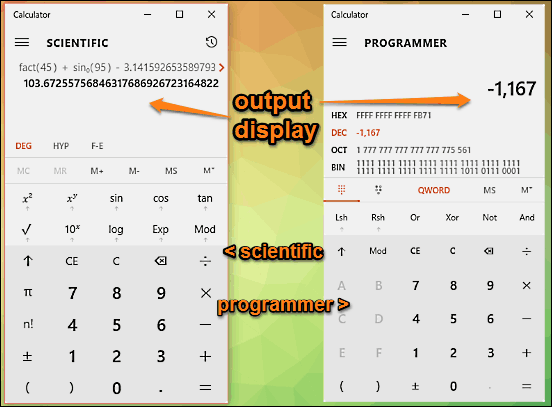 How To Use the Unit Converter In Windows 10 Calculator App?

The powerhouse calculator (and the different modes) is just one side of the coin as far as the Windows 10 calculator app is concerned. That’s because it also includes an incredibly feature-loaded unit converter, one that lets you convert just about anything and everything, from volume to temperature, and from power to angle. For each of these categories, the unit converter module supports quite a handful of units, making it a pretty impressive application. As far as using the unit converter goes, that’s a piece of cake. To start off, simply use the hamburger menu to select the type of unit (length, power etc.) that you want to convert. The output area will have two displays, each having a drop-down menu for the selection of source and target units for conversion. All you have to do now is make the selection, and use the keypad to enter the source unit, and its equivalent target unit will be displayed in real-time, as you’re entering the value. A really “cool” feature of the converter is that it also shows how “much” something is, as compared to physical objects. For example, 5000 mph is equal to the speed of 9.09 jets. Here’s a screenshot: 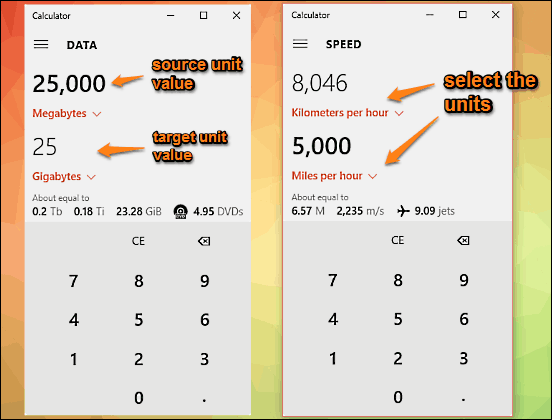 Also See: Windows 10 Alarms And Clock App: All You Want To Know!

The Windows 10 calculator app is an insanely powerful and useful app, and can come in really handy in making calculations a breeze. Add the super cool unit converter it totes to the mix, and this thing gets even more awesome. Give it a shot, and let me know your thoughts in the comments section down below.