Dropbox has been one of my favorite file backup software. This is one of the first software I install on any computer. If you have heard about Dropbox, you would know that Dropbox gives 2 GB free space with each free account. In addition, Dropbox used to run a promotion that if you refer someone to Dropbox (using your referral link), you get 250 MB of additional free space, up to a total of 8 GB free space. That was a great way of getting tons of free space in Dropbox.

Now, Dropbox has even bettered that. Dropbox has now increased the free space per referral to 500 MB. So, if someone signs up for Dropbox using your referral link, you get 500 MB additional free space. Most importantly, cap for free space via referrals has been increased to 16 GB, instead of 8 GB. So, you end up getting double total space for free.

And here is the part that I like best in this announcement: Dropbox is doubling up referral space for even those who have already signed up for Dropbox. So, if you had referred 10 friends to Dropbox already, and had got 2500 MB of free space till now, Dropbox will double that to 5000 MB, without a need for you taking any action at your part. My Dropbox space has already been doubled, and I am now at more than 18 GB free space! 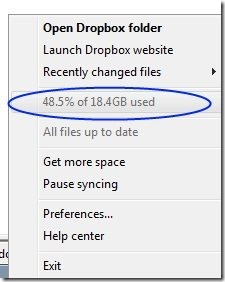 Of course, you don’t need to stop here, and can get even more free space in Dropbox. Check out this earlier article about how to Get Extra Dropbox Space for Free.

I am very happy and excited about this announcement from Dropbox, as I was almost running out of space in my Dropbox account, and did not want to upgrade to a paid account. Instead, I was planning to move to some other file backup service, like, SugarSync which offer 5 GB Free out of the box, and 32 GB free with referrals. Dropbox is still not there yet, but this additional free space is good enough for me for the time being, and I’ll stick with Dropbox. Dropbox’s ease is addictive.

Have you tried Dropbox? Are you excited about this additional free Dropbox space? Let us know in comments.