Here’s a list of 4 Twitter UI customizer extensions for Chrome which allow you to make changes to the Twitter interface so that it becomes a bit more modern or practical. There’s for example night mode Twitter extension on the list down below which turns the entire Twitter UI into a dark color so that it’s easier on the eyes during night. Another one expands the interface from left to right so that it’s not so center focused. Most people are satisfied with the default interface that Twitter has to offer, but if you’d like something a bit extra, then keep reading and see what can be done with Chrome. 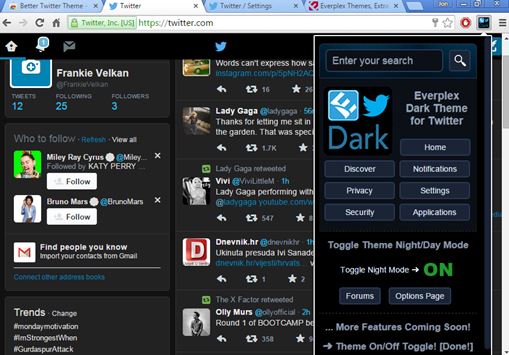 Better Twitter Theme is a Twitter UI customizer extensions that adds a top right corner icon for changing the entire Twitter color scheme to a dark color. This will make it easier for you to browse Twitter at night, to avoid having a too bright a screen.

Left click on the top right corner icon to open up the menu. There you’ll find not only the button to turn on the “night mode” but also quick access options for Twitter home, notifications, settings, search and more. Colors are nicely matched, and there are no problems with black text being on black background, or white text being on white background. Click on the toggle button again to revert back the changes. 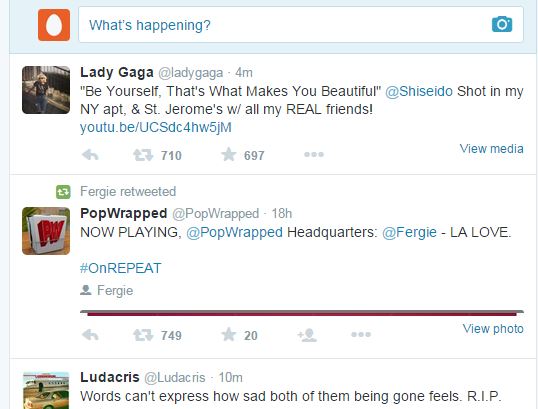 This makes it easier to scroll through the list of new tweets. Media like images and videos can be activated and expanded using the “View media” button that’s available all the way on the right edge of the tweet feed.

Also, have a look at 5 Twitter Extensions For Google Chrome. 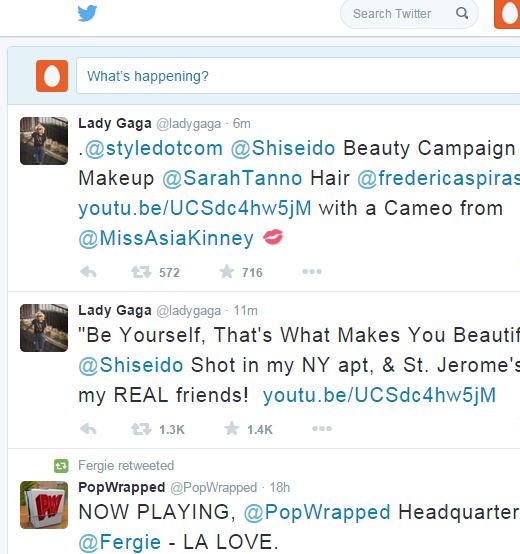 Twitter Better is an extension that will change the font used on Twitter so that reading tweets is a bit easier on the eyes, and also so that the entire website looks a bit more appealing.

Fonts aren’t the only things that are changed. Compare this screenshot where Twitter Better is active with the previously posted screenshots and you’ll see that spacing is also changed and the font is increased in size. All these customizations make it a breeze to read text on Twitter. 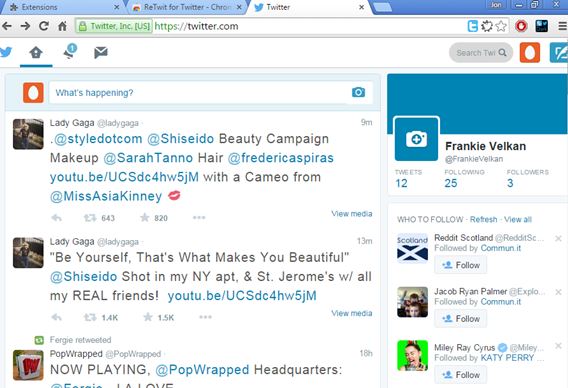 I’ve saved the best for last. ReTwit for Twitter is one of the best Twitter UI customizer extensions that I tested and I’m saying that because it does a complete overhaul of the actual layout.

All the other extensions that I covered until now focused on only changing one thing, colors, fonts, etc. ReTwit will put the sidebar on the right, and give the entire interface a more modern look, as you can see from the screenshot above.

Also, have a look at 4 Twitter Notifier Extensions For Chrome.

All 4 Twitter UI customizer extensions from the list above are useful, each in their own way. I suggest that you try them all out and then leave a comment down below telling me which one you liked the most. Start with ReTwit to spruce up Twitter a bit, and then add the others according to need.