Here’s a list of 4 Twitter notifier extensions for Chrome which you can use to keep track of what’s happening on your Twitter profile without having to switch to the tab where Twitter is open. When you consider the amount of features that the extensions mentioned down below have, you could say that they are full blown Twitter clients. They will notify you about new activity, let you view your Twitter feed, send tweets, reply to messages and more. 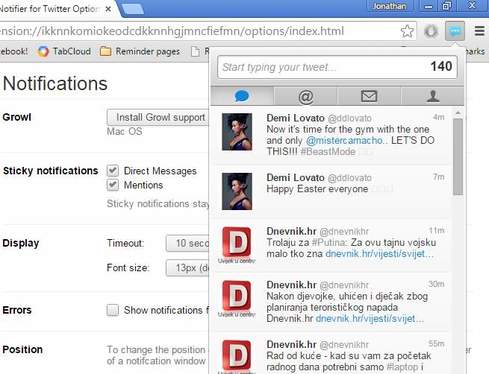 Next to notifications about tweets, mentions and messages, this Twitter notifier extension will also let you create tweets, view your feed, reply to messages and much more. Notifications will come up in the form of standard Chrome notification pop-ups in the bottom right corner of the screen. 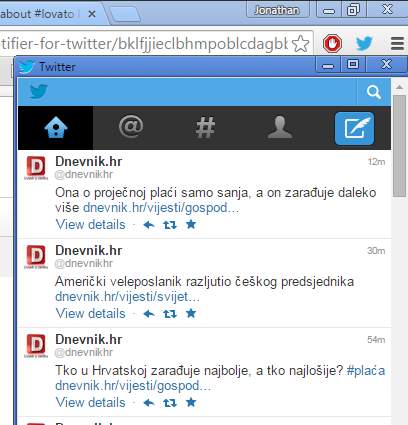 On top of all that, you also get a fully functional Twitter client, where you can completely manage your Twitter profile, see image above.

Also have a look at Cocoweet: Realtime Twitter Client For Chrome.

Twitter Notifier for Chrome is actually only a Twitter notifier extension, whose only functionality is to badger you with notifications whenever something new happens on your Twitter profile. 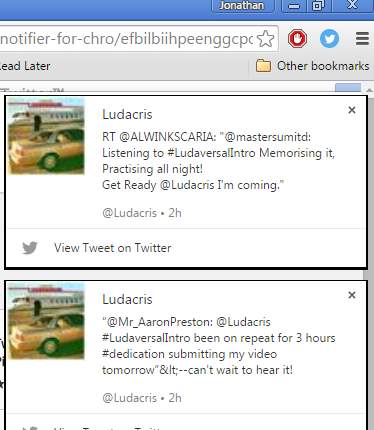 You’ll receive notifications when someone sends a tweet your way, retweets your tweet, when a new follower has been gained and when blacklisting users. Extension is simple to use, so simple that it doesn’t even have any options to tweak, other than requiring you to connect to your Twitter, which can be done by left clicking on the top right corner icon (in a pop-up window).

Chime supports and gives you notifications for multiple social networks and websites, not just Twitter. 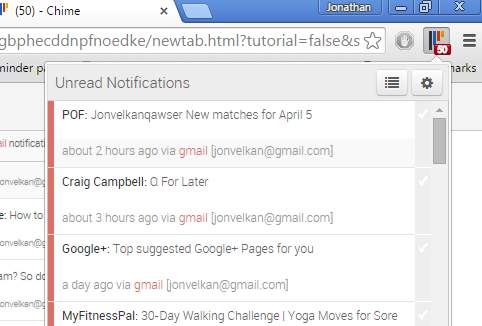 It also supports Gmail, Reddit, Facebook, Google+, Quora, Flickr, Github, Stackoverflow and Foursquares. Some websites authorize and give Chimes access automatically (if you logged into them), like Gmail and Facebook. Others will require that you login and authorize Chimes manually. Notifications can be seen in the top right corner, they are the standard badge notifications, see image above. Left click on the icon opens up a more detailed report about new activity on the connected accounts in a pop-out window.

Twitter Notifier for Chrome, the third extension from the top is my favorite because it’s simple Twitter notifier and nothing more. Chime is the same, only it’s not designed specifically for Twitter, so use it if you also need notification from other websites. All the other Twitter notifier extensions are practically Twitter clients, so install them if you need additional features like sending tweets, checking the feed and more.