Boom Audio Player is a small and lightweight music player that is very simple to use. It supports a wide range of music formats, so its perfect for those who have several different audio formats mixed in their music collection, and the fact that it’s lightweight makes it perfect for older machines which might not handle more modern, resources hungry audio and media players very well. 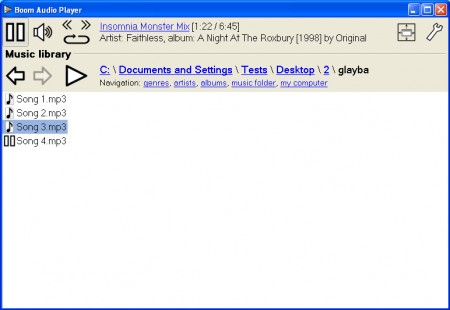 Advanced wouldn’t really be the word with which you would describe the interface of Boom Audio Player, basic and rudimentary would be more suitable. What this means is that this audio player is probably not suitable for those users who are interested in eye candy, but more for those who are only after functionality, in this case music playing, which Boom Audio Player does very well.

What you see on the image above is not the default interface technically speaking. After opening the program for the first time there will not be any songs in the list, you will have to navigate to your music folder for the song list at the center of the application to populate. Even though this action sounds simple, to some it might be difficult to find where exactly they can start going through their files, because there’s no standard, File >> Open Folder dialog. File browser can be started by clicking on the links at the top of the music playlist: 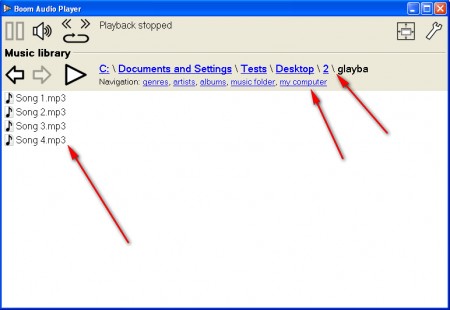 Clicking on My Computer will open up the partition selection window, and from there you can navigate to your music folder, after which all the music files in that particular folder will become listed and they will become available for listening. List of audio formats that Boom Audio Player supports is rather long, which is a great thing, it means less hassle with conversions if for example music player that you normally use doesn’t support the music format in which you copied songs from your friends. Supported formats are:

Other program features that Boom Audio Player has are pretty much basic for audio players, things like, song repeat, album art and there’s even theme changing options, which just makes the window change colors, there are 4 different colors to choose from, on the images above you have the classic look, there’s also Black, White and Graphite color themes. Here’s how the black theme looks like, on the image below, which will be more preferable for those who love darker colors: 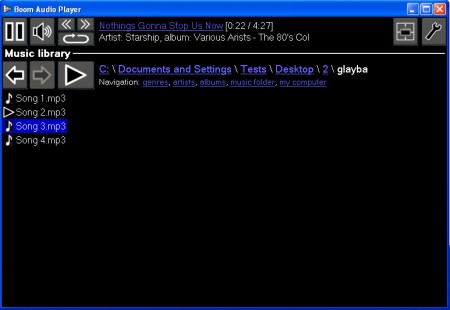 Boom Audio Player should be used by music lovers that are not to demanding and who are interested in saving computer resources, which you will undoubtedly do. Task Manager reported that Boom music player spent only around 10 MB of memory, compare that to the almost hundreds of megabytes that competition is spending and you sort of get an idea of why Boom Audio Player would be a good choice. There’s still room to grow, and future version will probably be better than the one that we tested, but don’t wait for an update and try Boom Player now.