Atomic Player is a totally free music player using which you can import music, organize music and of course listen to your favorite music. This free music player is a complete package of good visuals and features. Moreover this free music player doesn’t emphasize much on the attractiveness factor and concentrates more on music factors. The player comes with a single display and does not support other skins and visualizations. So we can say it is an effective yet simple music player and performs efficiently by playing the audio files with minimal or no CPU space usage.

On the flip side the player (free version) does not support more than 4 equalizer presets. However the customization option for a 30-band equalizer is supported in the free version. When the player is run for the first time it asks the users the following 3 options: 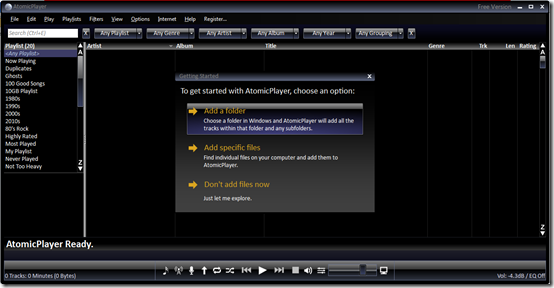 You may choose any of the above and start using the free music player. However you may even add music and albums later from the ‘’file’’ option at the top of the player. Upon adding an album or the media files you want, the screen displays all the files at the centre of the screen whereas the left panel displays all the album names including the preset ones. 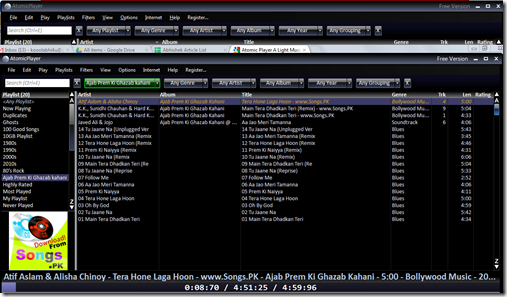 Atomic Player also supports creating playlists under the heads of Albums, Artists, etc. which most of the other players do. You may even switch on to a lastfm or an internet radio from this application. You would also like to check out Shuffle music player reviewed by us. 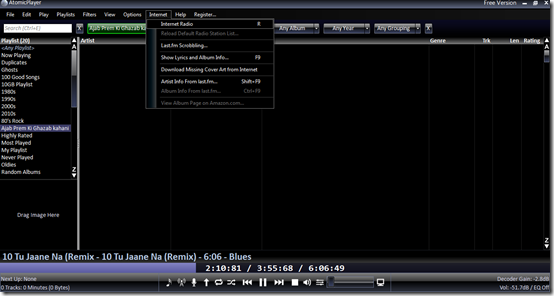 Features Of This Free Music Player:

Atomic Player is a free music player within which you can play and organize music stored on your PC effortlessly. Download Atomic Player for free.