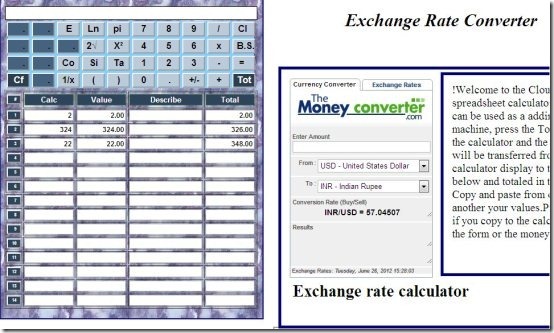 Update: (July 16., 2013) The extension no longer exists in Chrome Web Store. If you have Firefox installed on your system, you can check out 4 free currency converter add-ons for Firefox.

Exchange Rate app also has a smart calculator to perform basic calculations. The calculator is in the form of a spreadsheet. The spreadsheet is set up in such a way that it totals all the calculated amount automatically on your Google Chrome browser.

Whenever you see a yellow Chrome Currency Converter icon on the address bar, it means that there is some value which is in some other currency and the extension is converting the value or values in the base currency set. Click on the yellow extension icon in the address bar to disable and revert the values back to their original currencies.

Along with converting the currency, the extension also highlights the values in yellow color on the webpage accessed on Google Chrome browser. Chrome Currency Converter extension really makes the browsing easier as it saves your time to copy the values and then paste it in some currency converter software or app to convert the currencies. With this extension installed, just access any webpage and leave the rest on it. 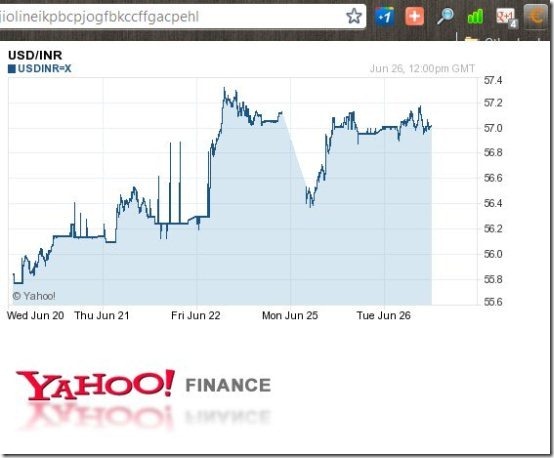 Update (25-Aug-2012): This extension is not available in Chrome Web Store anymore.

XE Currency Converter is a free currency converter Chrome extension to convert currencies of different countries on Google Chrome. The extension has simple logic to convert currency. It works online on Google Chrome. You just have to launch the extension, select the base country and other country, and then click on “perform currency conversion” button in the extension. XE Currency Converter extension will divert you to its website which shows the converted currency which you requested. You can also set the value to convert.

Update (25-Aug-2012): This extension is not available in Chrome Web Store anymore.

If you find any other good currency converter app or extension, then do let us know in comments.