Here’s a list of 3 Gmail scheduler extensions for Chrome which integrate with Gmail so that you can create and send out automated emails according to a schedule. Gmail probably isn’t the best tool for marketing, sending out newsletters, but if you have a small list of contacts, customers, then Gmail is enough. Following extensions can help you setup automated emails, according to schedule that you setup. Sending out emails according to a schedule can come in handy when you have contacts in different time zones, and you don’t want people to receive emails in the middle of the night. 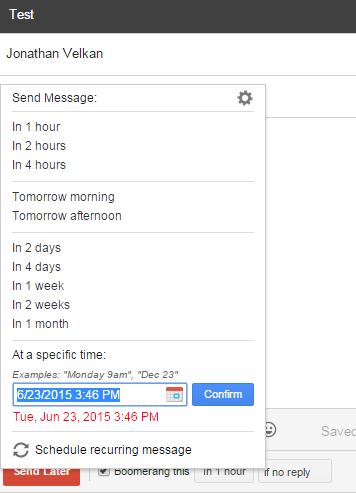 Boomerang for Gmail is a scheduler extension for Chrome which adds a “Send Later” button to emails that you compose inside Gmail, see image above.

Clicking on that button pops out the schedule creator where you can setup vague schedule for the email like tomorrow morning or tomorrow afternoon, in two days, in a week, etc. A more specific time schedule can be setup down below using the “At specific time” segment of the setup. Note that Boomerang needs access to your Gmail account in order to send out scheduled emails, which are actually kept on the Boomerang website (your profile there) once they are scheduled.

Get Boomerang for Gmail.

Also, have a look at 5 Encrypted Email Extensions For Chrome. 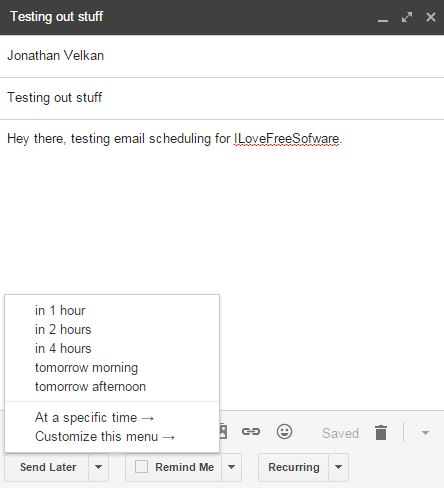 In the compose new email pop-up you’ll see 3 options actually, “Send later”, “Remind me” and “Recurring”. Last two are for setting up reminders to send email manually later or to setup recurring emails. The one that interests us here today is the “Send later” button. Notice on the image above that here as well there are similarities with Boomerang. You can setup the email to be sent tomorrow, in 1, 2 or 4 hours or at specific time. Free Right Inbox accounts are limited to 10 emails per month.

Get Right Inbox for Gmail. 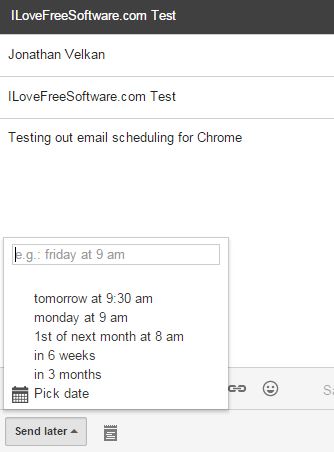 Despite being in the beta phase of development SndLatr is fully functional and it’s very similar to the other two Gmail scheduler extensions that I covered.

To schedule an email so that it’s sent later, just start creating a new email and once it’s done, instead of clicking on the Send button, tap on the Send later button which the extension puts there. Specific date and time when you want the emails sent is setup by selecting the “Pick date” option. Other options are the same vague ones like in 6 weeks, in 3 months, or slightly more accurate tomorrow at 9am.

Get SndLatr Beta for Gmail™.

Also, have a look at 4 Gmail Notifier Extensions For Chrome.

All three extensions from the list above worked great for me, at least for the short time period schedules that I’ve setup. How well they perform on longer time scales, like when you schedule emails for a couple of months in advance, it’s up to you to find out. Boomerang has a slight advantage in my book because it offers more settings and has better account management. Let me know what you think in the comments down below.