Microsoft recently announced the Preview release of Office 2013, the heir of Office 2010, which brings many new improvements and focuses more on technologies which are becoming more and more popular, cloud computing, together with tablets and smartphones.

Even though Office isn’t a free application, this Preview version lets you download Office 2013 for free. This Office 2013 preview version remains free, during the testing period at least, so everyone who wants to try out the commercial side, now’s your chance. 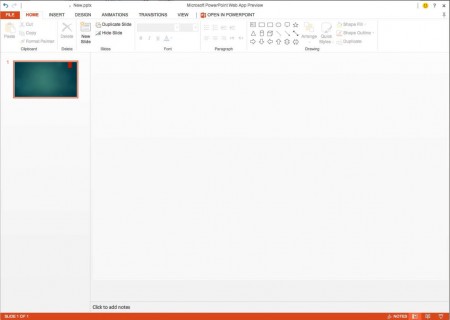 Two major improvements which Office 2013 brings we’ve already mentioned,increased focus on the Cloud and tablets and smartphones, but there are other things which might be more important for users which are worth a mention. Here’s a quick list of new features:

Each one of these features will be explained in greater detail in the following lines, but you will surely notice that last “great” new feature which comes with kills support for older versions of Window, more precisely, Window XP and Vista. This is not a good thing, and we’ll explain why exactly is Microsoft doing this later on, let’s first see what exactly is meant when it’s said that Office 2013 comes with increased focus on the cloud, tablets and smartphones.

Office 2013 brings more compatibility with SkyDrive, that’s what’s meant when it is said that there will be more focus on could computing. 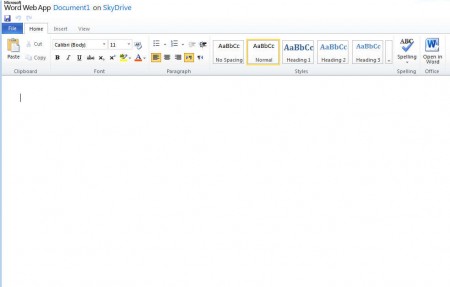 You could have created, edited and saved Office documents in SkyDrive up until now. On the image above you can see a Word document opened inside the web browser. What changed now with Office 2013 is that there is far more integration with this free internet online storage. After you install Office 2013 Preview on your computer, you’ll be able to login to your Window Live account, more precisely to your SkyDrive account, open up, and edit documents which you have stored there.

Opening documents in Office gives you more editing options, which is great for all those who aren’t satisfied with the tools given by the browser editor. Another great thing about doing work this way, is the fact that the latest Office comes with smartphone and tablet apps, which you can use in order to turn your mobile devices into an office editing device.

The main purpose of online document editing would be the ability that you can work together with your colleagues over the internet, perhaps from home or when you’re on a business trip.

Skype can certainly help you when you’re working in Office over the the internet, for example you can contact your friends or your colleagues directly from Office, without needing to switch windows. This will greatly increase your productivity, for example you can start a conference call and make work plans with your team, make decisions about projects that you’re working on and anything else for that matter.

Recent Skype purchase by Microsoft has really turned out to be a great move by the Redmond giant because there are a lot of places where integrating Skype can come in handy, and Office is definitely one of those places. For all those who aren’t fans of Skype, you’ll gonna have to use other messaging software, but without Office integration.

Windows 8 comes with a brand new interface called Metro. A lot of people are not too fond about this change that Microsoft has introduced in the next version of its desktop operating system and for better or worse Office 2013 works in sync with Metro.

Here’s how Word 2013 looks like with the changed interface, the web app preview at least. When compared to previous versions you can see that there’s a lot less glow and eye candy. Metro brings a complete new way of doing things on the desktop, and the same thing is true with Office. Note that this version of Office is only a preview, and a lot of things can still change in the future, for both Office 2013 and Windows 8.

While we’re on the subject of Windows 8 and system requirements, we promised you to explain why exactly is Microsoft not releasing their upcoming Office 2013 for older Windows system, and the answer is quite simple, in order to force people to switch to the latest versions of Windows, so that they ditch XP and Vista and upgrade to either Windows 7 or 8 which will be able to run Office 2013 just fine.

What Microsoft did here is not very nice, but we can’t help it and if you want to enjoy Office 2013, you’re gonna have to have a computer which runs at least Window 7, because Windows versions older than this one will not be able to use the next generation of Microsoft Office.

More bad news are coming for Mac users, who will not be receive an upgrade for their Office software. Microsoft has decided to drop support for this increasingly popular operating system. For the past several releases of Office there were Mac versions made, but things are changing now, and Mac fans are gonna either have to leave older versions of Office on their machines, or they are gonna have to turn to one of the free office suites, like OpenOffice or LibreOffice.

Computer hardware also has to be a little bit more powerful, with several gigabytes of memory, newer generation processor and graphics card, because Office 2013 is a bit more demanding when it comes to hardware resources.

All those who are interested in test driving Office 2013 should follow the download links which you can find down below, and get their hands on a free preview copy. While testing is active, you will be able to use the program fully, but the drawback would be that once the full version comes out, all that stops. Still if you want to check out Office, now’s your chance, grab your free copy and enjoy it while you can, which will probably be sometime in 2013, hence the name.