Here’s a list of 5 minimalistic music player apps for Android which are small, lightweight and won’t be too distracting when you just want to just enjoy music. Recently I covered music players with features like lyrics fetching, album art download and even ID3 tag editing. Most of the players I mentioned down below lack such features. They have simplistic interfaces and small size which makes them perfect for those with limited storage on their phones and tablets.

Music Player by Leopard V7 is a minimalistic music player for Android which despite its size of just under 3MB offers a lot of interesting features and a simplistic interface. 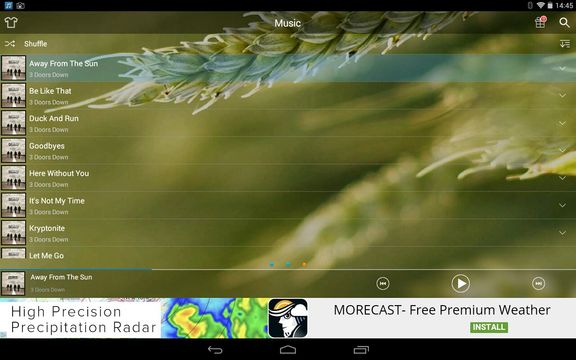 For example this music player comes with almost two dozen themes, music sorting based on artist’s name, album name, originating folder, playlists can be created, there’s a timer to stop music after XX number of minutes, equalizer, and even lyrics fetching from online. All these features are seamlessly integrated into a simplistic interface and a small package.

Get Music Player by Leopard V7.

BlackPlayer Music Player has a modernly minimalistic interface, which can be customized by tweaking color accents, fonts, transition effects and themes. 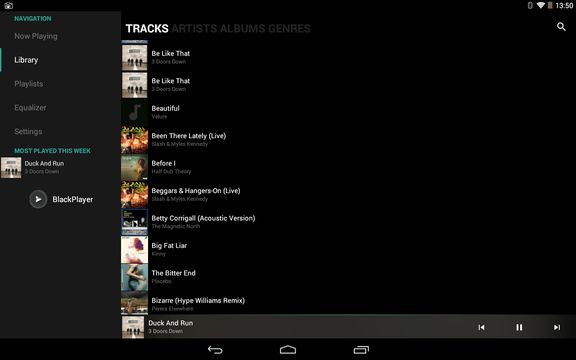 All the common formats are supported like MP3, OGG and WAV. App has an equalizer, support for playlists, and a find tool to find songs that are loaded into the library. BlackPlayer reminds me a lot of music players found on the stock Android ROMs.

Also have a look at NexMusic: Android Music Player App with Material Design.

Music Player by JRT Studio is 1.5 MB “big”, which makes it one of the smallest on this list of minimalistic music player apps for Android. 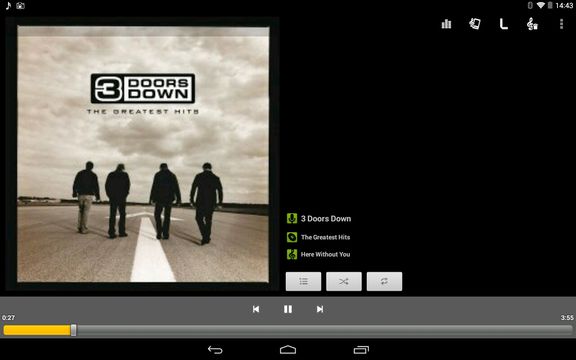 First thing that you’ll see after launching the app is a categorization of all the songs according to artists, albums, songs, and playlists. What you see on the image above is the “Now playing” interface. From here you can access equalizer, delete songs, access the find tool and controls for managing playlists.

Get Music Player by JRT Studio.

Music Player by mytechsound is just like Music Player by JRT, with a couple of additions. Here, for example, you get to change interface color schemes. That’s the first thing you’ll be asked after launching the app. 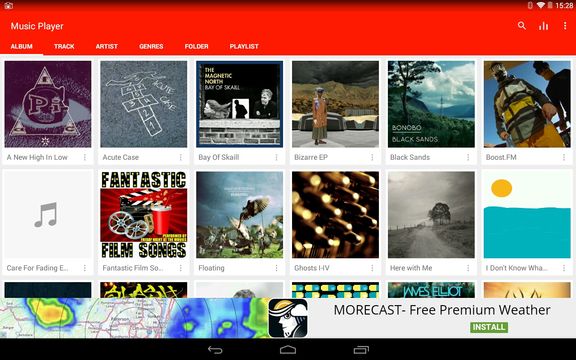 Music library is categorized based on album, artist name, song, folder, there’s a find tool, equalizer, support for numerous formats like MP3, FLAC, AAC, MIDI, WAV, etc. Best of all, these features are packed in just under 4MB.

Get Music Player by mytechsound.

Also have a look at Android Music Player App with In Built MP3 Cutter.

Music Player for Android is another very small music player app, just around 1.5MB, with a nice selection of features. 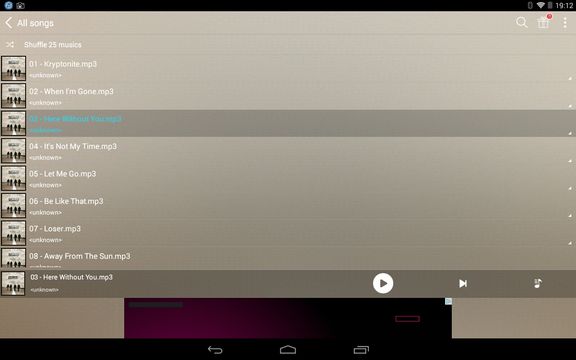 Songs are again grouped into categories based on album, artist name, song title, etc. Lyrics fetching from the web is supported, but it didn’t quite work for me. Other features include an equalizer with 22 music presets, playlists, change song with gestures (shaking) and more.

Get Music Player for Android.

It’s hard to pick a favorite from the list of minimalistic music player apps for Android above. The one that stands out the most is Music Player by mytechsound, primarily because it offers a selection of colorful themes, and also because it offers some very useful features. BlackPlayer Music Player comes in at second place because it doesn’t force ads. Let me know what you think by leaving a comment down below.