As you can see, we labeled several applications as Microsoft Office alternatives, that is because they really can be used as a worthy free substitute for this expensive commercial office suite. Even though there are differences in the interface design and the way that the various different applications are used isn’t quite the same, once you get use to the change, you can use Calligra as a perfectly viable Office alternative. The most important feature necessary for Calligra to be called an alternative, format compatibility with both Office 2003 and Office 2007 is there, so you can easily continue editing your Microsoft Office documents without having to start over with your document collection from scratch. 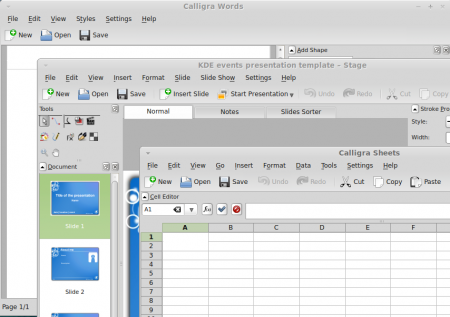 Another great new development with Calligra free office suite would be that there’s a Windows installer available which you can use to easily install Calligra on your Windows system. That wasn’t the case with KOffice, and even though the Windows version might not be as advanced as the Linux version is, it is a great step towards making Calligra more available to people. Mac users are still waiting for a simple installation of the complete suite, but some applications can be installed separately. 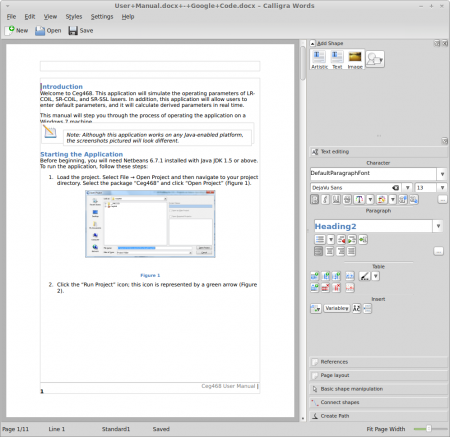 On the image above you can see Calligra Words with a .docx Word 2007 document opened inside it. Notice the interface differences. Unlike Word which has majority of editing tools stored in the tool strip at the top of the application window, Calligra Words has everything in the right sidebar. Same thing is true for the entire suite, same design will be present in practically every other application of the Calligra free office suite. We started off with a .docx document opened because we wanted to show how good and if at all is document formatting preserved when compared with the Word 2007. 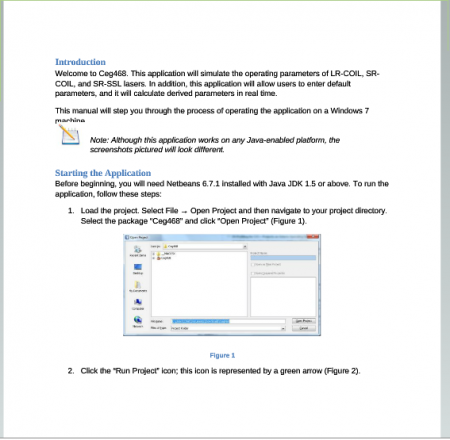 This would be the very same document opened inside Word 2007 and as you can see despite of the fact that there’s some complex formatting present, Calligra Words displayed the document just fine. The only difference would be the addition of the editing boxes around elements, but that didn’t ruin the overall formatting of the document. You can now easily edit your Word documents for free, on the right you can change style, import objects and images and do what almost everything that every other word processor can do. 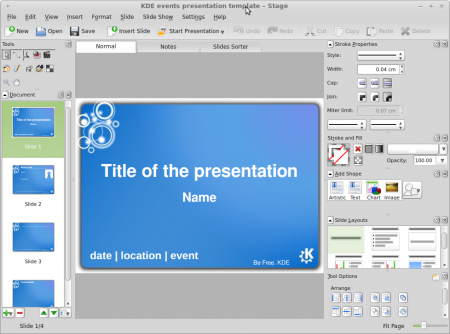 Stage is a very feature rich presentation creator, whose interface design as you can see from the image above doesn’t go that far off from the design of similar applications from other free office suites like LibreOffice, OpenOffice, KingSoft Office and other similar office suites that exist out there. Arrangement might be a bit different, for example slides are on the left side, while again all the important tools for actually creating and editing the presentation are in the right sidebar. Here again Office formats are supported, and once you start up Stage, you’ll be greeted with a document selection window where you can select if you want to use and empty presentation or a template, like the one that we decided to use on the image above. There’s dozens of templates available. 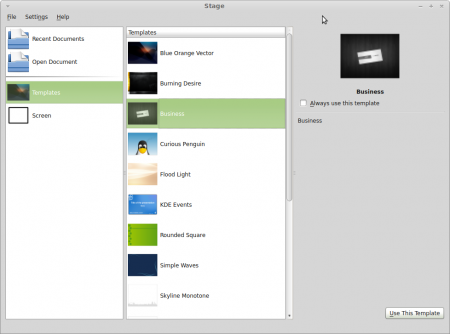 Creating presentations isn’t very difficult, different layouts can be selected and you can add charts, images, change styles and do pretty much everything that you can do in Words with text, When you’re done, preview your presentation by clicking on the Start Presentation. 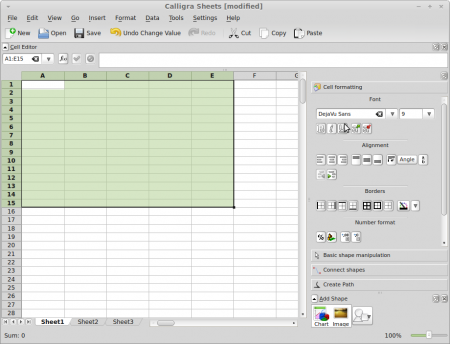 Spreadsheet application which can be found in this free Office alternative has undergone some major changes from when we were testing it in KOffice. One of the most useful improvements that we noticed would be the fact that Calligra Sheets now comes with support for functions, but interface has also been changed. Created tables can now have formatting, borders can be changed and you can even create different types of chars, import images and add various kinds of shapes. 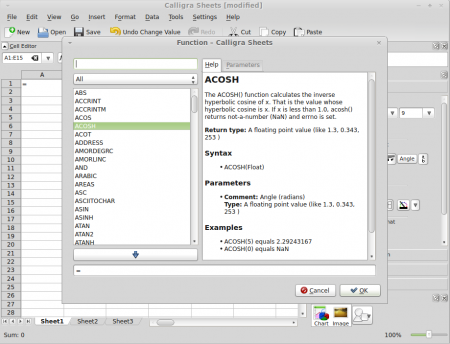 A very large selection of mathematical functions now waits for you when you select Insert >> Function. They can be added to the sheet the same way that are added in other office suites, by clicking on a field and typing in the proper syntax which you can find out from the very helpful about about page which every function has. 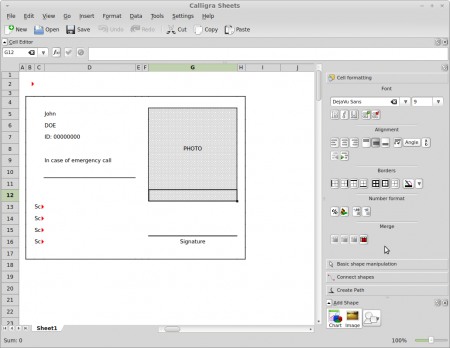 The only template which is offered with Sheets can be seen on the image above. Notice how very advanced sheets can be created with this free Excel alternative. Sheets is also fully compatible with the Office suite so when we call Sheets an Excel alternative we really mean it.

Draw vector graphics and paint with Karbon and Krita

Graphics editing applications are usually not found in office suites, at least not as advanced as the ones found in Calligra, but here the users actually get two, one for editing vector graphics, Karbon, and another one which uses regular graphic types, Krita. It can be used in order to paint portraits and other types of art. 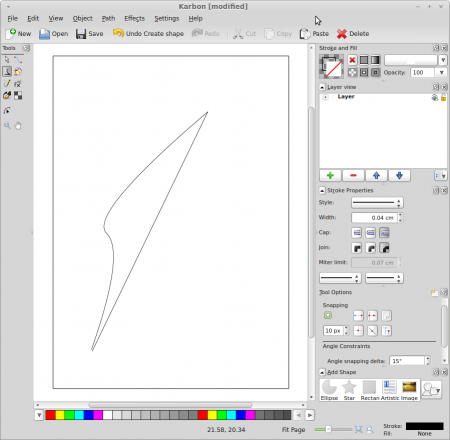 Karbon as you can see from the image above looks very similar to Inkscape, which is another very popular vector graphics application. It even has layers, which are very useful when you’re creating complex images, new edits can go on new layers so that they are easily reversed. Editing can be done with the usual tools found in these types of applications, path tool, pen tool and several others. 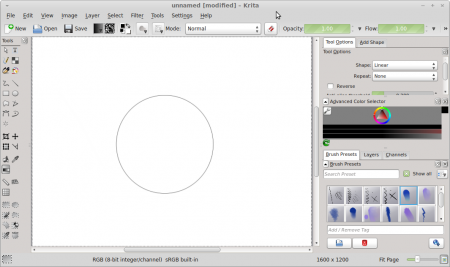 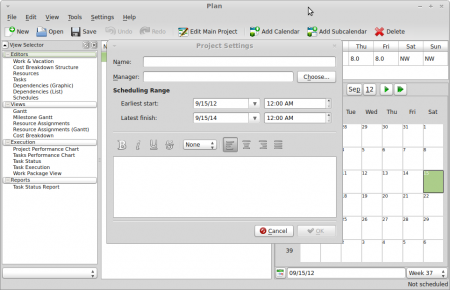 These three applications are similar in nature, they all revolve around organization. Out of the three most interesting would be Flow which can be used not only by those who are interested in creating flow charts and diagrams, but also chemists, electricians, because as you can see in the image above, next to having flowchart components, there’s also electrical circuit components, chemical formal symbols and several other symbols which are regularly used by scientists. 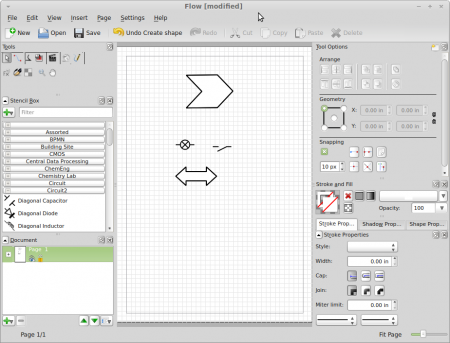 Braindump can be used to scratch down ideas on, add text, write down the projects and awesome ideas that you think of and use what you’ve created for further development and brainstorming until you can create something a little bit more concrete. Once you do create something that’s a bit more serious, then it’s time to switch to Calligra Plan where you can create and manage projects, schedule work, divide tasks, add resources and everything else that’s important for managing projects effectively. 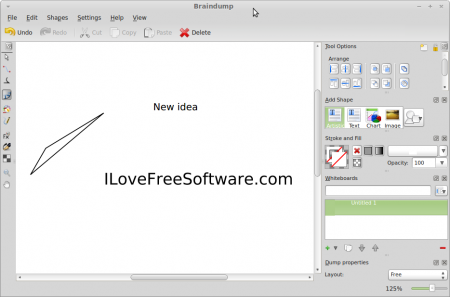 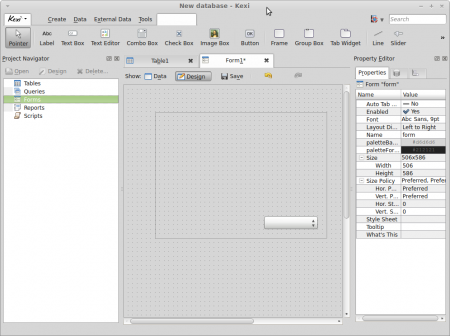 Kexi is a fully featured database software which you can use in order to create Access like databases. Practically everything that you find in Kexi’s commercial brethren can be done in Kexi. There’s obviously tables, queries, forms, reports and even scripts. Forms can be developed graphically like you can see on the image above. Even here support for the Office format is present. Access .mdb files can be opened and you can easily continue editing your existing databases.

Calligra offers a lot to its users, the main office tools are made even better by the fact that you get graphics tools and also tools for plan management, flowchart creation, brainstorming and to top it all off you can use the very advanced Kexi database editor, where you can create databases like the ones that are created in Access. All those who want to edit Office files but without actually paying for it have to look into Office alternatives.

Calligra is one of those alternatives and even though there’s obvious difference in the interface design to which you are gonna have to get used to, the underlying functionality that you get with Calligra free office suite is pretty much the same and you will learn how to do your work and be productive with this free Microsoft Office alternative very quickly and easily. Follow this link if you’re interested in installing Calligra on Windows, if your on Linux you follow the download link down below and find the install instructions for your distro.