Just Circle is a free arcade game for Android to spin a ball around various tracks (easy and complex) by tilting the phone. You have to guide a ball along various tracks with different shapes to reach the finish line. To spin the ball, you have to tilt your phone such that the ball can move towards the finish line. While playing some of the easy levels, you might think that you can do it easily. But my friend, with time the difficulty of the game also increases and makes it difficult for you to guide the ball with ease. Similar to other arcade games for Android, “Just Circle” looks simple and easy to play but it’s not, trust me on that.

The initial stages are pretty easy to play, but as you proceed further the difficulty of the game increase with complex tracks. Each time you play, you will be awarded stars as per your performance which can be used to unlock stages and colored balls. To achieve more stars you have to beat track times, complete fireball challenges, etc.

The following screenshot shows the game interface with different options. 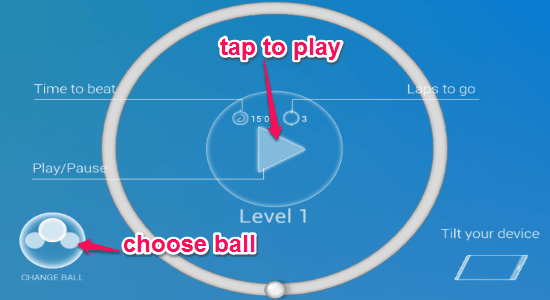 How to Spin a Ball Around Various Tracks by Tilting Phone:

If you love playing puzzle games for Android, then you will definitely like “Just Circle”. So give it a try from the link provided at the end of this post or from the Google Play Store.

How to control the ball by tilting phone:

The controls are pretty simple, and all you have to do is tilt the phone in the direction of the spinning ball to control it. Simply guide the ball along tracks and avoid obstacles to reach the finish line. Before starting the game, you will be able to see the track time which you have to beat in order to get more stars and the number of loops. When you start the game, the timer will start indicating the time taken by you while guiding the ball. The following screenshot shows how to spin a ball by tilting phone. 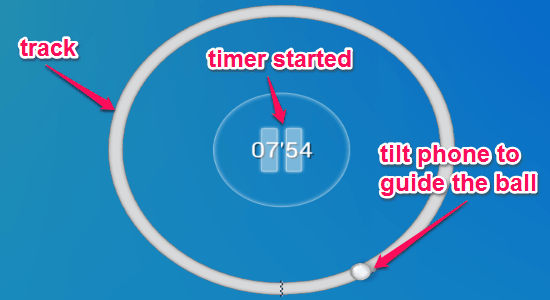 How to select and play different stages:

The game has different stages with various tracks including easy and complex tracks. Each stage comes with 12 levels or tracks. To proceed to the next stage, you have to complete all the levels in the current stage. After completing all the levels, they will get permanently unlocked which means you can select any of your favorite levels to play it again and again. The following screenshot shows how to select levels. 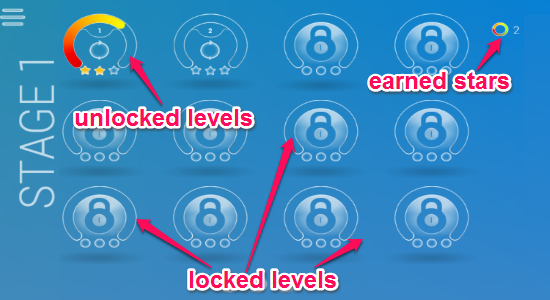 How to get rewards while playing the game:

After playing each level, you can earn up to 3 stars as per your performance. Your performance totally depends on how fast you guide the ball through tracks. If your performance is weak then you will earn nothing and it will ask you to try the level again. As we have already discussed that the stars or rewards can be used to unlock stages or colored balls. The following screenshot shows two different results with weak and good performance. 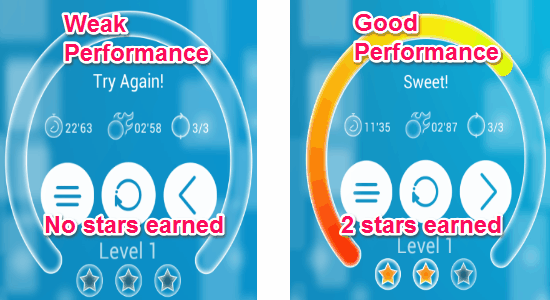 Honestly, I think “Just Circle” is quite an interesting arcade game for Android where you have to guide a ball through different tracks by tilting the phone. It is probably one of those games which look very easy to play but gets harder as the level increases. Earn stars with better performances to unlock stages and colored balls.

Try this amazing app from the link here.