Here’s a list of 5 of the Best Free Arcade Games for Android. These free games have a frantic, fast-paced, and addictive gameplay; and they focus on your reflexes rather than brain-teasing or puzzle-solving. While some of these games have extremely gorgeous 3D graphics and eye-popping explosions, others are just too addictive and fast-paced to put down! Also, most of these free games are such that you can progress through them without shelling out any real cash for in-game purchases. Scroll a bit down, now!

Interested in Sports games rather than Arcade? Check out these Basketball games for Android! 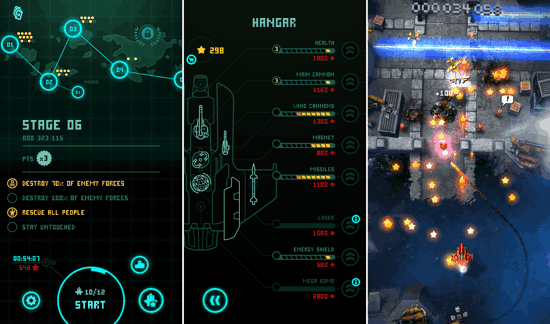 Sky Force 2014 is one of the best Shooting Arcade Games for Android. It is a reboot of the older Sky Force and Sky Force Reloaded Games (which were developed for the Symbian devices of yore). The graphics are gorgeous, the gameplay is extremely addictive, and the controls are nothing to scoff at. Once you play this game, you will definitely fall in love with it, and the Google Play Games integration for highscores will keep the addiction at potent levels.  And, the best part is that you can progress through the stages WITHOUT spending any money on in-game purchases! Go ahead, give it a try! 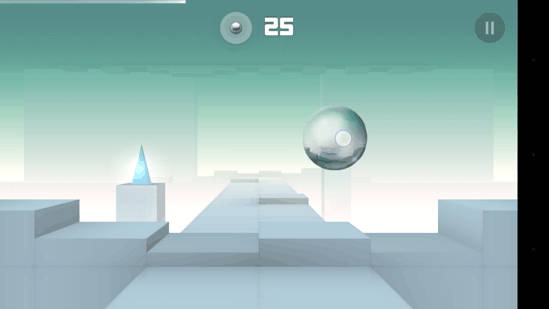 Smash Hit for Android is different. In Smash Hit, you are given a fixed number of balls, which you have to use to smash through the glass obstacles. And, if you fail to shatter the glass obstacles, you will (or to be more precise, your screen will) collide with them and you will lose some balls from your reserve. The pace of the game will always keep you on your toes, while the great graphics and praise-worthy sound effects won’t disappoint you at all! Yep, this is another free title that is worthy of your time! 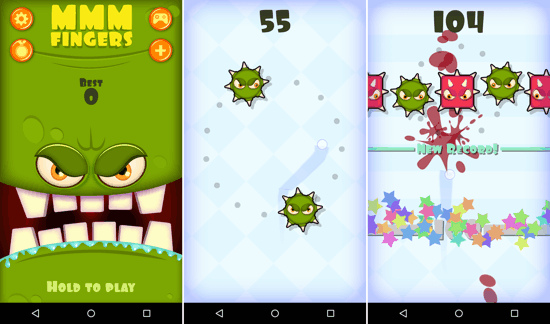 When I reviewed Mmm Fingers for Android, I was pleasantly surprised by its relatively new concept and the intuitive control mechanics. And that hasn’t changed even now! In Mmm Finger, you have to place your Finger on the Screen, and keep it that way while sliding your way from between numerous monsters who’ll try to eat your finger (yeah, not literally!). The game is an endless runner (if you call it that), and you have to try and beat your own highscore. To know more, read the full review by clicking the link below. 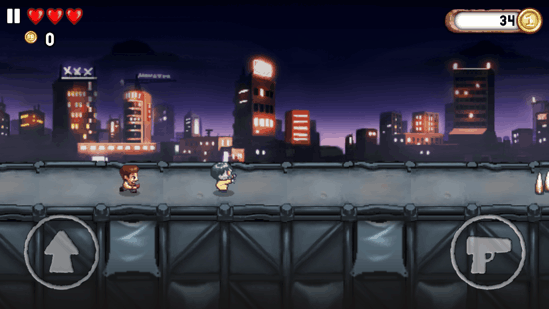 Monster Dash for Android is another one of the side-scrolling Arcade Games for Android brought along by the developers of JetPack Joyride. In Monster Dash, you are a shotgun-touting guy named Barry with only one aim in life — shooting every Monster in sight. You can jump to avoid obstacles (or Monsters), or just fire your Shotgun to make ‘monstrous’ dead meat fall on the ground. As you progress through the game, you will also unlock several gadgets and guns. The graphic style is classic 2D, but admittedly, not as polished as it’s in JetPack Joyride. But it’s still a fun game and worth trying. 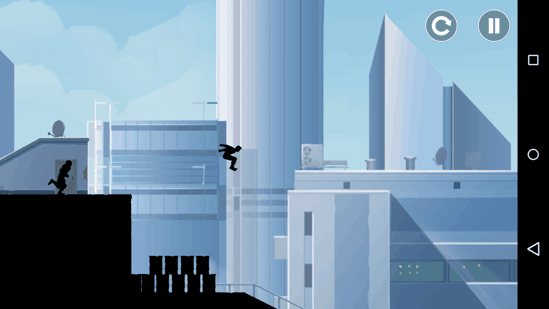 Vector for Android is parkour-based game in which you have to escape from the evil guys chasing you. There is a prologue story shown initially when you launch the game, but that is not what impressed me in this game. The centre-stage here belongs to the parkour-based gameplay style, the black-‘n-white game-art, and the realistic animations. I did have to bear through a couple of intrusive ads every once a while, but the gameplay is unique and justifies the wait (for me at least!).

These were my favorites for this list of 5 of the Best Free Arcade Games for Android. While there are numerous other great options on Android which missed a berth in my top 5 by a minuscule margin, I would still love it if you could point out some engaging games that you were expecting here. Adios!