Mmm Fingers for Android is an endless Game in which you have to touch the screen and slide along your finger while avoiding hungry monsters. You have to be careful as the moment any monster touches your finger, it will eat it (obviously, not literally!). The farther you go, the higher your score will be. The game brings a fresh breath of air, in a genre filled with endless runners, which look practically identical and have the similar ‘age-old’ game-play. While some of the endless runners are quite enjoyable, most of the games don’t bring anything new to the table, which can make me stand-up and take notice. MMM Fingers though, is different, impressive AND addictive. 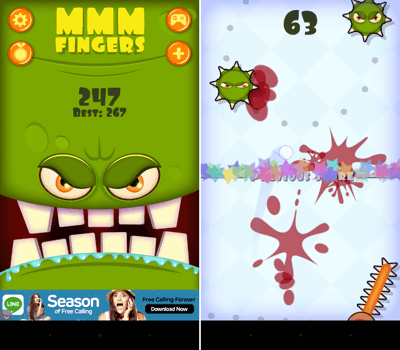 Gameplay: Touch the Screen and Don’t Let Go in Mmm Fingers for Android 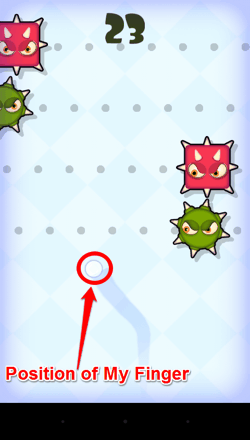 Coming to the concept first, you don’t really have a playable character in this Game. Instead, your finger is the one in spotlight here. Yep, you have to save your Finger from being eaten by the monsters on the screen. To be precise, you just have to slide along your finger on the screen and avoid the monsters who will be looking to eat your finger (see above, it’s a screenshot of the gameplay). 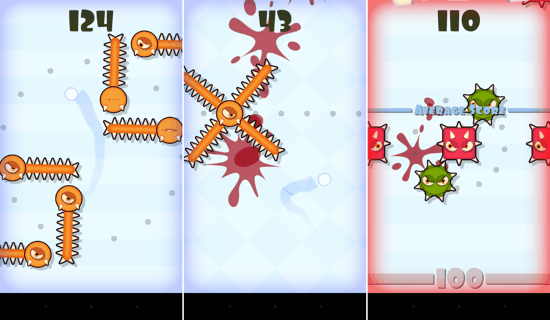 And it’s not just the gameplay that’s impressive, there are certain graphical details which you’ll notice, and know straight away that Mmm Fingers for Android has come prepared for your indulgence. For example, some of the monsters’ eyes follow your finger’s movements wherever you move. Not just that, every time that you die, there is blood-splatter over the background. And, once your game is over and you retry it, the blood-splatter remains right there and you can spot it if you go further than your previous turn! Pretty neat, eh?

Compete with Friends in Mmm Fingers for Android 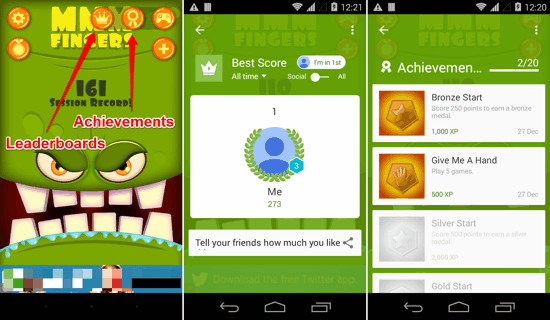 In-Game Options and Highscores in Mmm Fingers for Android

Android users with Low-end devices can rejoice after seeing the Settings option in the Game. Mmm for Android can probably run even on low-end hardware thanks to the option to select the graphics level. Yep, this is one option that I’d like to see on more and more games. I, for one, could run the game with GFX Quality set to ‘High’ even on a low-end device, without a glitch. 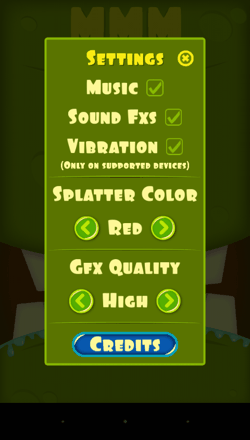 You can also control the color of blood splatter shown when your finger gets eaten. The usual sound and music settings are present too.

Want to see your career statistics? Just tap on the Medal icon on the main screen and you can see your Career Stats along with your high score and recent stats (see the screenshots below). 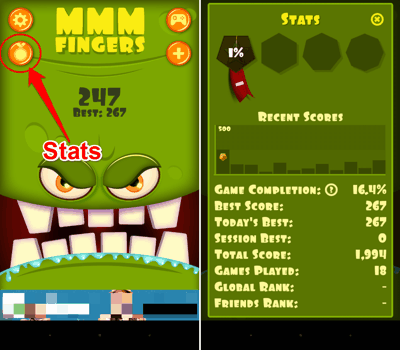 While there are numerous games in the Endless-running genre, this game is different and has a unique perspective to the ‘endless’ game-genre. The concept itself is intriguing and hence I for one, haven’t seen any other game which implies the same gameplay elements as Mmm for Android. While some users have reported about lag and stutter in the game; as I have stated earlier, I didn’t notice a single issue even when I tried the game on a lower-mid range device. The Game might seem easy on first look, but the difficulty level increases as you go further, and it’s tough to lose interest. And yes, Mmm Fingers for Android is available on the Play Store for an awesome price of free. Yeah, I know your finger is already raring to go!

Get Mmm Fingers for Android.