Here is a list of 3 Best Android Apps to Identify Songs. These apps can be used to recognize the Song Title, Album, and Artist easily just by holding your Android device closer to the Music being played. Quite a few times it happens that you hear a tune which you really like, but don’t recognize. On other instances, it might even happen that you don’t know about the Artist or the song, but really like the tune that you just heard. To stream that song or to get it directly on your Android device, you just need to know the Artist and Song details. The apps listed below will help you in just that. Read on to find out more about these Android Apps to Identify Songs.

You can also take a look at this article about apps for streaming Music on your Android device. 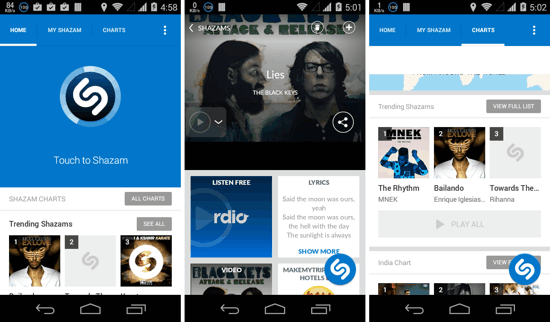 Shazam for Android is one of the most popular apps to Identify Songs that you are listening to. Shazam has an extremely intuitive interface which lets you identify the Song being played in one go. Just launch the app and you will be greeted with a big blue button. All you need to do is hold your phone close to the speakers (or whatever output device the music is being played from) and tap on the blue button. Shazam will then search for the tune in its online catalog and (most often than not) instantly give you the details of the Music track. You also get links to listen to the song directly or watch the video of the song. To know more about Shazam, you can head over to this article. 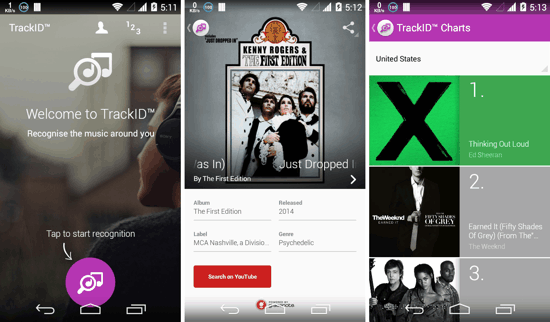 TrackID is another beautifully designed app with a simplistic yet refined interface. The main screen of the app has the Music Recognition button and nothing more, so to speak. You just need to tap the button on the bottom (see the first screenshot?), and TrackID will start recording and recognizing the Song. It is rather quick to perform the search and then presents you with the details of the Song along with a button to search for the same song on YouTube. You can also see the current chart-toppers (as can be seen in the third screenshot above) from around the world by tapping on the 123 icon on the main screen.

Want to know more about Track ID for Android? Check out this article. 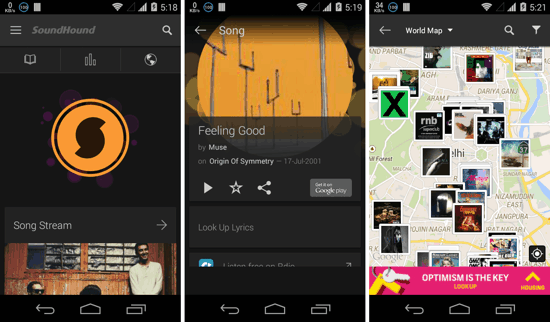 SoundHound for Android is a Music Discovery app that helps you in discovering great new music that you might not have heard before. And, yes, SoundHound is also one of the best apps to identify songs. You can search for the currently playing music right from the main screen. The app will then identify the song and also present you with a Play Store link to download the Song. Not just that, a small Play button allows you to hear a clip of the song to confirm that the identified details are correct. SoundHound for Android also has a unique World Map on which you can see what people nearby are searching for. SoundHound is available for free on the Google Play Store!

That’s it guys, you have hereby reached the end of this list of 3 Best Android Apps to Identify Songs. Did they succeed in recognizing the song being played when you gave them a try? Go on, you can also suggest other similar apps in the comments section below.