Player One – Lucky Media Player is a free Windows 8 app that supports the playback of multiple video and audio formats. The app is designed to have a very neat and simplistic interface, and has enough features to be used as a perfect media player replacement Metro App. The app allows you to play back videos in full screen format, and apart from these basic features, it also allows you to create playlists and plays them back flawlessly. The app works flawlessly even when left running in the background, and being a metro app, it consumes way less battery power and resources than regular media player software like VLC Media player.

Player One – Lucky Media Player has a very polished interface, and it is absolutely free from advertisements. The app supports docked view for multitasking, which is a pretty neat feature because it allows you to watch videos while you are working on some document.

Using the Player One – Lucky Media Player app in Windows 8…

Player One – Lucky Media Player is packed with features. When you launch the app, you will be presented with a clean and polished interface which looks like the below screenshot. 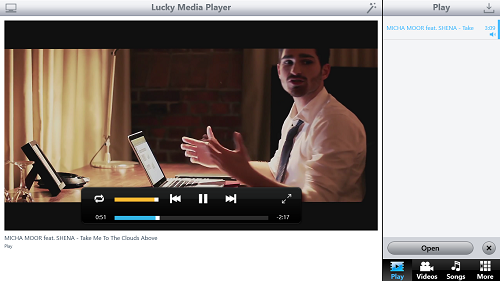 In the above screenshot, you can see the video playing back smoothly. I opened up this video by clicking on the Open button at the bottom right screen corner, and then selected the file that I wanted to playback via the file browser screen. Do note that you can also select multiple audio/video files for playback and open them, and all of them will appear as a list at the left side of the screen. You can also switch to the full screen video mode via the diagonal double-headed arrow button control which appears at the bottom of the video’s frame. 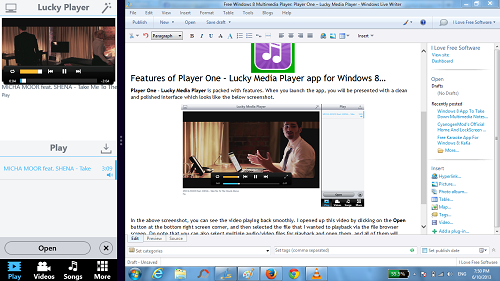 The above screenshot clearly shows the video player in docked mode. Do note that if you are playing back audio files, then only the list of tracks will be visible in the docked view.

This is all that you need to know to start using the Player One – Lucky Media Player app for your Windows 8 device. You can also check out the Clipshow video player app for Windows 8.

Player One – Lucky Media Player is a pretty neat and polished app for Windows 8 devices that supports docked view and offers incredibly smooth audio and video playback. You should definitely check it out!

Get Player One – Lucky Media Player for your Windows 8 device.