I was navigating through Chrome Web Store recently looking for some new extensions. I noticed a section in Left sidebar that said “For Your Desktop”. I know all the Chrome extensions that I have tried till now work within Google Chrome, so this section looked interesting. Clicking on it opened some of the regular apps, most of which I had already heard about. However, I noticed that there is a big difference. These versions of the apps actually opened outside of Google Chrome. My curiosity got the better of me, and I had to figure out what is going on, and I was quite excited with my findings. Here they are.

Recently Google introduced Chrome apps for Desktop. Basically, these are apps that run outside browser. They install in the same manner as other Chrome extensions, but instead of running with Chrome, they run more like desktop software.

Let’s look at some of the major features of Desktop Apps for Chrome:

As I already mentioned, the big difference here is that these apps run outside browser. So, you don’t see any traditional Chrome stuff, like, address bar, bookmark bar, tabs, etc. In fact, when you run any of these desktop apps for Chrome, you would be more tempted to think that you are running a normal software installed on your PC. The apps can have a window as per what their developers wanted. You can maximize, minimize, resize the window of the apps (if the app allows). And each app will have its own separate window and will show up separately on taskbar, like any other running software would. Here is a screenshot of a desktop app called WeatherBug (the same app that is available for Windows 8 and iPhone as well): 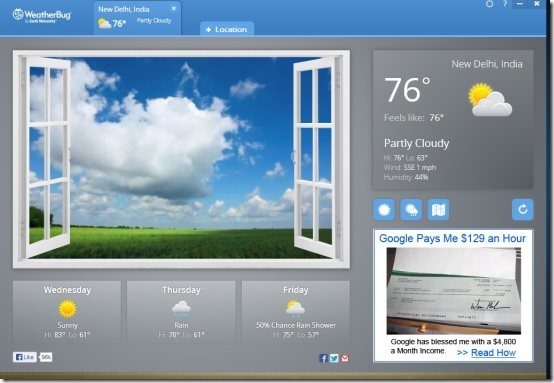 As the apps launch separately, you can easily close any app as well. This is different than Chrome extensions, as they might keep running in the background all the time, without you being aware of it.

Another major difference is that these desktop apps for Chrome do not launch from within Chrome. They come with their own launcher. Google adds a small application launcher to taskbar of your PC when you install your first app. Just click on that app launcher to launch any installed Chrome desktop app. When you click on that launcher, a small launcher opens up that shows all the installed Chrome desktop apps. Just click on any app to launch it. It even comes with a built-in search box to search for installed apps; this comes handy when you have too many apps installed. 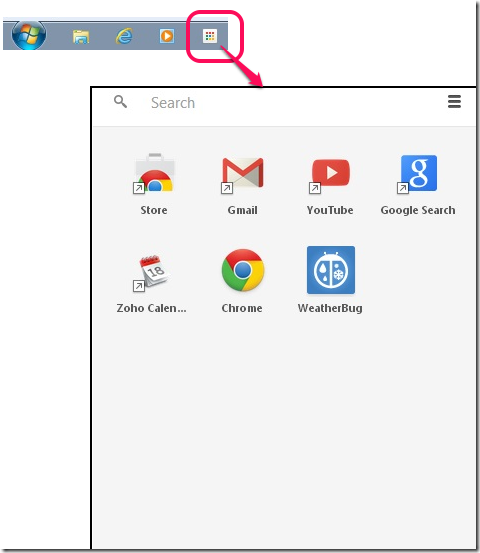 Another major difference, and I would say advantage, of Chrome desktop apps is that they work offline. So, you can use Chrome desktop apps even if you are not connected to internet. However, let me clarify what that means: You can launch the Chrome desktop app even if you are not connected to internet, but which all features of app you will be able to use offline depend on what developers of the app have enabled. It might happen that you are able to edit and modify data when you are offline, and data is synced up when you connect to internet. Or, it might happen that entire data storage is offline, so you don’t need internet for the apps at all. Or, it might happen that even though app might launch, it might need internet to do anything (like, if there would be a Chrome desktop app for Youtube, I suspect that would fall in this category). Google at its end has been encouraging developers to follow an offline first approach, in which it has asked developers to first create an app that works completely offline and then think about features to add for online mode. This offline mode means that entire code of apps have to be downloaded and installed on your PC, while data might be stored locally or online.

If you have tried Chrome extensions, you know most of them are pretty small in size. However, that is not true for Chrome Desktop apps. As the apps have to work offline, so they have to download all the codebase and other required components and so download size is normally more than Chrome extensions. I was trying to download a Chrome desktop game and its download size was more than 350 MB! However, when you compare them with comparative desktop software, you shouldn’t be surprised.

As Chrome desktop apps work like normal desktop software, they have access to lot more parts of your PC, then what an extension running inside a browser might have. They can access your hard drive to modify data, access devices connected to PC, connect to internet, and lot more. Essentially, all the liberties that a normal desktop software enjoys. It does sounds scary a bit, but again when you compare with any other desktop software you wouldn’t be surprised. I agree that these permissions can be misused, but that risk comes with any software that we install on our PC.

All the Chrome desktop apps that I saw were free. Will they be free forever? I doubt that. I believe many of them would go with Freemium model. And some might be just ad supported (see the screenshot of Weatherbug app that I posted above, you will notice a nice rectangular ad at bottom right corner).

So, what do I think about Chrome desktop apps? I think they are pretty awesome. I tried couple of apps and I was quite impressed. The fact that I can start and stop them anytime I want is a good move. I do not completely like the fact that Google adds a separate launcher; I wish they could have integrated with my Start Menu. But that’s a small pain. Overall, this is a good move from Google that will expose us to a plethora of more quality apps that work offline.

What do you think about Chrome desktop apps? Let me know your thoughts in comments below.