Task ForceQuit is a free application which you can use in order to shutdown unresponsive applications that can’t be stopped the usual way, by clicking on the big red X in the top right corner of the program window. This free task killer will run in the system tray and as soon as you start having problems, as soon as an application becomes unresponsive, you can open it up, find the application in the list of currently running apps and simply click quit, simple as that. 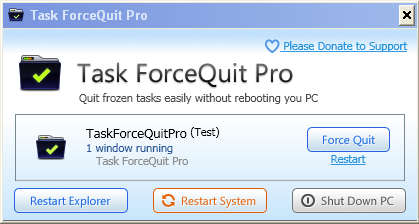 Each one of the applications that you have running will be listed in the Task ForceQuit main list like you can see on the image above where Task Force itself is listed with a Force Quit button available next to it. The list is updated automatically, and in order for the Task ForceQuit window not to bother you, it can be minimized to the system tray, where it will keep monitoring for applications that the user opens in case they freeze and stop working.

Applications freezing and becoming unresponsive is something that happens all the time, especially on older computers some of which are not able to open modern websites, not to mention modern programs, even if it’s just something simple, like word processing. 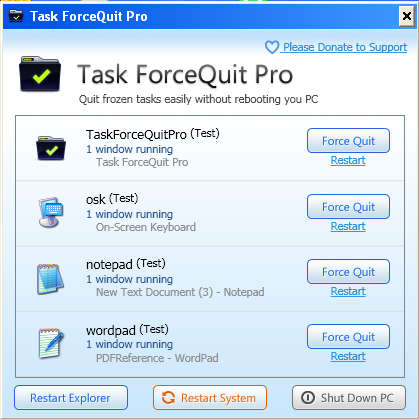 At the first sign of trouble, if an application isn’t willing to cooperate, buttons can’t be clicked and eventually the entire program window goes blank with the title changing to the famous Not Responding message, you should open up the Task ForceQuit from the system tray, where it will be nested, and find the application on the previously mentioned list. Like you can see on the image above, next to each one of the programs which are running there is a Force Quit button, which you can click on if you’re having problems with an application that’s unresponsive. Other options are also available, you can for example:

Task ForceQuit is free, but when you click on the Force Quit button on a particular application, you’re gonna be greeted with a window where you’ll need to enter an email address in order for the application to be activated. Giving your email is the price for using ForceQuit and it’s a very cheap price when you think about what you get: 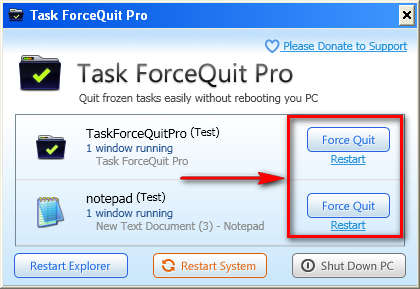 This free task killer is very simple to use, and it’s very lightweight, which makes it perfect for older computers that we’ve mentioned before. Having it running in the system tray can help you out at times when you’re having problems with applications that are freezing on you and not working properly, at least until you find the thing that’s causing problems with the application. Since Task ForceQuit is free, it doesn’t cost you anything to try it out and see how useful it can really be.