Brightest LED Flashlight is a free Flashlight app for Android that allows you to use your Android device’s LED flash as a torch. This app is an extremely handy tool to use when there is a sudden power cut in the middle of the night, and you are stuck in a place where you need to access to a light source immediately. This app is designed with a very smooth user interface, and runs pretty smoothly on all supported Android devices. The app makes it easy for you to use your phone’s flash as a torchlight, and the interface is so easy to understand, that it requires almost no learning curve at all, whatsoever.

Brightest LED Flashlight is available for free via the Google Play Store.

How to use this Flashlight App for Android?

When you launch the application, the following window will pop up. (see screenshot below) 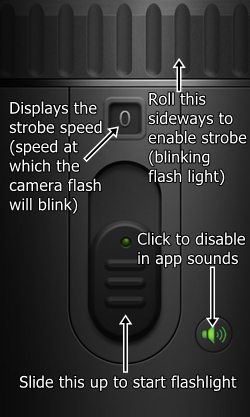 In the above Window, there are some pretty easy to understand controls. Sliding the slider in the center upward will enable the flashlight. Clicking the volume button will turn the app sounds on/off.

Note: In the counter below the strobe slider, the strobe frequency (speed) increases from 0 to 9, with 9 being the highest, and 0 meaning using the Android device as a regular torchlight (no strobe)

Strobe is basically the blinking feature of the flash. Enabling the strobe from the strobe slider will actually make your Android’s flash blink. This feature looks cool if you are in a place where you are dancing to music,  and you can show off your phone’s strobe light through this app. This makes for a fun feature when you are in discotheques, clubs, pubs, etc. 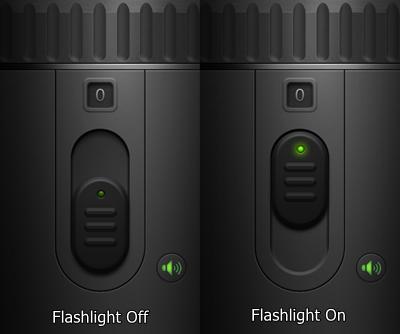 As you can see, in the On mode, the flashlight switch is in the up position, and is illuminated with a green dot kind of a light. This makes the app interface look even cooler.

Also check out other Android flashlight apps we reviewed earlier.

Brightest LED Flashlight is a good app to have, especially if you are looking for an app that allows you to control your phone’s flash with ease. This app is very reliable, and runs smoothly as well.