Espera is a free portable music player which was designed with parties in mind, playing music at parties to be more specific. That’s why in Espera you can find features which can come in very handy when songs are being played at social gathering, for example the Party Lock option, which freezes the music player options so that no one but the host can change the songs which are being played or adjust the volume.

As you can see from the image below, Espera also comes with full support for the new user interface style that Windows 8 brings. As for the player itself, it can play music which is stored on your computer locally, or it can lookup and play songs from YouTube, that’s what those two tabs local and YouTube are there, check out the image above. 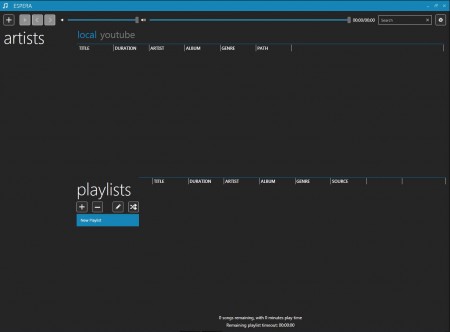 The most interesting features offered by this free Windows 8 party music player are:

Using Espera shouldn’t be too much of a shock for all the users that have been using “standard” music players up until now. Maybe the new interface will take some time getting used to, but everything that’s important for playing music is clearly laid out for the user, first step, like with any other music player would be to import your music collection.

How to import and play songs with Espera – party music player

Songs can be added by clicking on the plus sign in the upper left corner of the screen after which you’ll be presented with the standard browse for folder window. Select your music folder and click OK, songs won’t be added to the playlist right away. Playlists are gonna have to created manually by selecting the songs from the upper selection window. 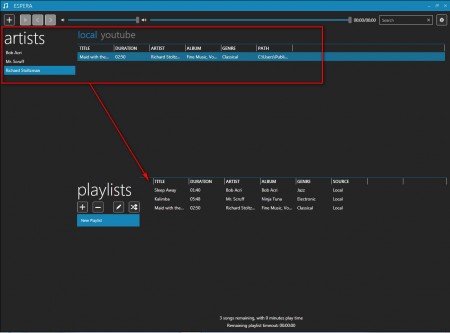 YouTube songs can also be added to the playlist, and in order to stream songs directly from the internet, you’re gonna have to have VLC Media Player installed on your system, since this free party music player uses some of it’s components to fetch YouTube music videos. Search box is available in the upper right corner of the screen which you can use in order to search for your favorite artist or song. 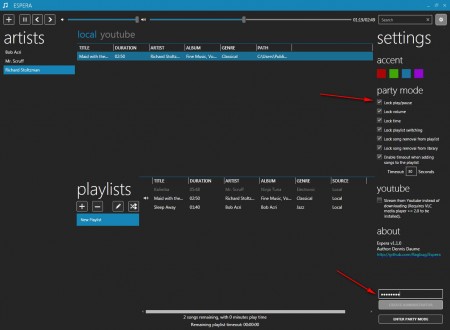 Now we come to the most interesting part of Espera, the party mode, which can be activated by clicking on the settings icon, which would be the gears icon in the top right corner of the window. Player options can be locked by entering the password in lower right corner, clicking on the Create Administrator button, and then clicking the Enter Party Mode button. Depending on which options you’ve decided to lock they will become unavailable. 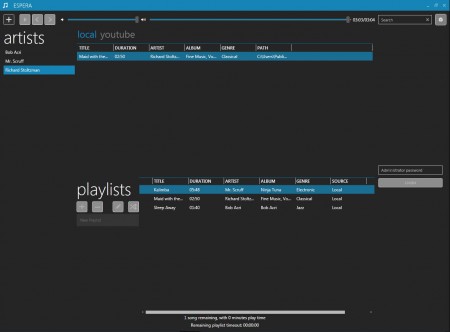 Until the administrator password is entered, it won’t be possible to change any of the settings. If you already installed Windows 8 and you’re looking for a music player that has the same appearance like the new Window 8 user interface you should try Espera, which next to having Windows 8 user interface also comes with useful selection of music player tools, especially for parties, free download.