Win+R Alias Manager is a free application which you can use in order to control what kind of word triggers are used for starting programs in the Windows Run dialog that you get after hitting the Win+R keyboard combo. Many people don’t know that it’s possible to edit these trigger words, and even create new ones. It has been possible to do this type of thing ever since Windows 95, there just wasn’t a program which you could use to manage these triggers, or aliases as they are officially known, until Win+R Alias Manager came along. 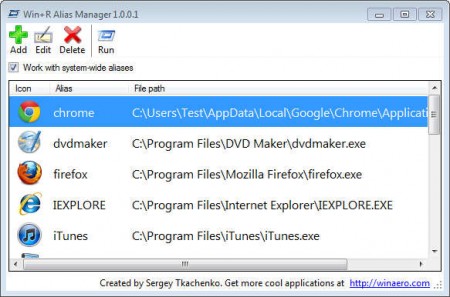 Since what Win+R Alias Manager does isn’t very complex, it doesn’t have an overly complicated interface, and it’s not a large application. List of installed computer applications can be seen right away after you open Win+R. Everything that you need to edit the application aliases can be found in the upper toolbar, right below the windows title frame.

The official name for these Windows Run triggers would be aliases, that’s why the application has “alias” in its name, but a lot of people will understand the word trigger better, because that’s what they basically are. Creating your own Windows Run aliases is very easy with the help of Win+R Alias Manager, just click on Add, and fill in everything that’s asked from you.

Check out email alias service from Hotmail for people having multiple email addresses. 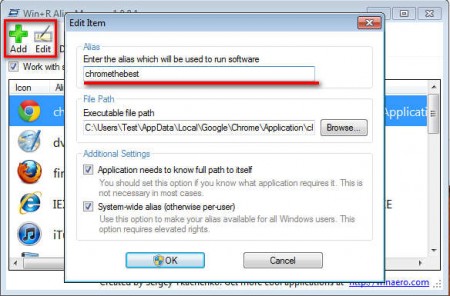 You get the same window for adding new aliases and the same window for editing existing ones, window which can be seen on the image above. First line at the top, the one which is underlined with red is where the alias goes. As you can see we are editing Chrome trigger or should I say alias. Word that you enter here can be anything you like, we’ve changed the trigger word from the default chrome to chromethebest. There can be no spaces or any other special characters which you can use for the alias, if you were planning on using them.

File Path field is where you select which application will actually be launched when the alias above is entered into the Windows Run field. You can leave rest of the options the way they were, activated. Remember to mark them if you are creating a new alias, because they make it available to all the users, or don’t, if you’re not interested in doing that. 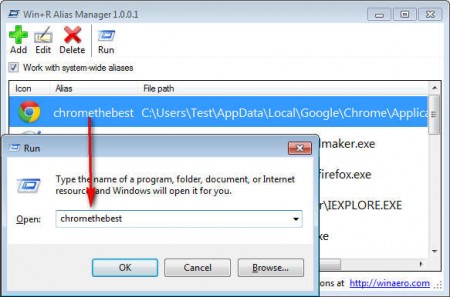 After you’re done configuring everything hit Win Key + R to start Windows Run which can be seen on the image above, enter the newly edited alias to the launch field and hit Enter. This will open up Chrome, with your newly created Windows Run Alias.

You can also check out windows launchers reviewed by us.

Win+R Alias Manager can come in handy if you have an application which hasn’t created a Windows Run alias or trigger on it’s own, because with this free alias manager you can add it yourself, with just a few clicks of a mouse. Next to being able to add new aliases, you can also edit old ones, and you can do all of these things free of charge, because Win+R Alias Manager costs you nothing.