TopWinPrio is a free software to change default priority of running programs in Windows. You can assign higher priority to active program, so that it is able to use more resources, while other programs in background get to use lesser resources.

When you run multiple programs in Windows, all of them get same priority, and run at same level of slowness. However, you might want the active program (the one that you are using) to run comparatively faster. TopWinPrio is a simple solution for that. 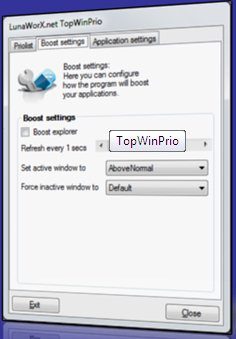 TopWinPrio keeps checking all the running programs to see which program is being currently used. It then automatically assigns a higher priority to that, as compared to other running programs. This ensures that Windows first tries to allocate more resources to this program, before allocating resources to others. You then get a better performance for the program that you are using.

Some other programs that deal with priority include: Control bandwidth of Internet applications, and Email prioritization software.

You can also exclude programs from the list to which you do not want to allocate higher resources. For example, you might want to Exclude Windows Explorer from the boost.

You can setup the time interval at which TopWinPrio checks active programs. You can specify the time in seconds. A good setting would be 5 seconds.

TopWinPrio is really handy if your PC has limited resources, and you tend to run many programs together. Then your active program would get Above normal priority, while background programs get a lower priority.