JavaTunes is a free cross-platform and portable audio player based on Java which supports a lot of formats and offers a lot of the same features that you get from modern music players, like playlist filtering, album art, and online radio streaming. Other more interesting features can be found, but the most interesting ones would be the ones that we mentioned in the opening sentence, on top of which you can also enjoy the fact that JavaTunes is portable. 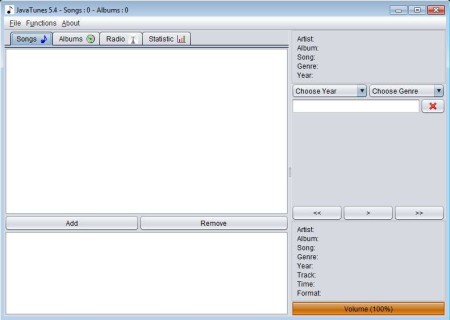 Screenshot above shows us the default interface of JavaTunes. Like you can see, we weren’t lying when we told that despite of its size of just 600kb, you aren’t in any way losing functionality. Top left corner holds the standard menu, under which you get four tabs for switching between songs, albums, radio stations or statistics. Rest of the interface is divided up into playlist area, the left side, and song information area, which means artist info, album art, and so on, which is of course on the right side. Song filtering and search is also available in the right sidebar.

There are just some of the features available in JavaTunes. Some might argue that since this is a Java based audio player, it’s not very system resource effective, but in our experience, only a very small fraction of resources were taken up by this free audio player, with song playing. Let’s see it in action.

How to Listen to Music with JavaTunes Audio Player?

You won’t be able to listen to anything if you don’t import your music collection. Click on File and from there either select Load Songs, if you want to open up entire directories, or select Open file if you just want to open one file at a time. 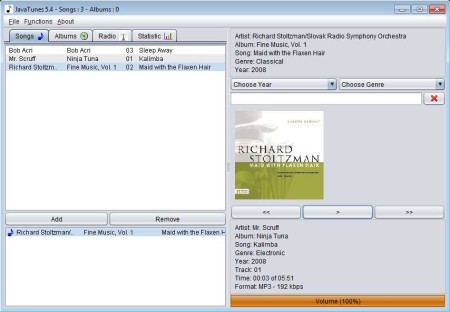 To play the song you just need to double-click on it with your mouse, like you would with any other player, or you can mark it and then hit the play button from the right sidebar. If the song has album art it will be shown in the right sidebar, along with all the other information that we mentioned before. There you can also use search to find songs in the playlist or filters based on music genre and/or year of release.

JavaTunes is made for all those who need a small and cross-platform audio player. Use it at parties, because the lock features is a must to stop people from changing songs or playing around with volume. Give it a try and see how it goes.

You may also try Audio Pitch & Shift and some other best free media players reviewed by us.