In this list, we will talk about 10 Best Free First Person Shooter Games for Windows 10. These games are great for testing your reflexes and your motor skills. The games listed here are designed in a classic 3D first person shooter format, which makes them extremely fun to play on any and all devices running Windows 10. 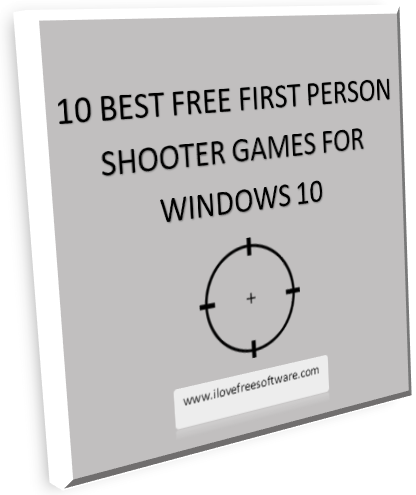 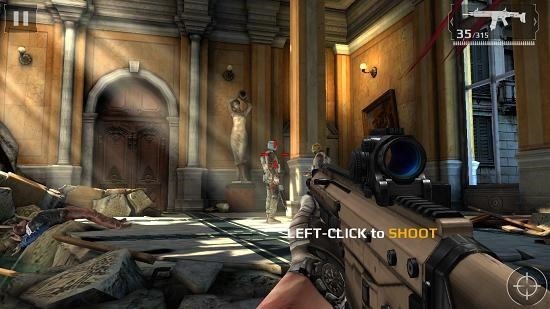 Modern Combat 5: Blackout is a fast paced first person shooter game for Windows 10 devices, also compatible with Windows 8 and 8.1. The game has a well rounded approach to the take on first person shooter games for Windows, and makes for a good way to test your aiming skills. The game is designed to test your mettle in an environment which varies in difficulty. It works fine on tablets PCs (touch) and laptops/desktop PCs as well, which don’t support touch input. The game has been set in an army shooter style.

Get Modern Combat 5: Blackout for Windows 10. 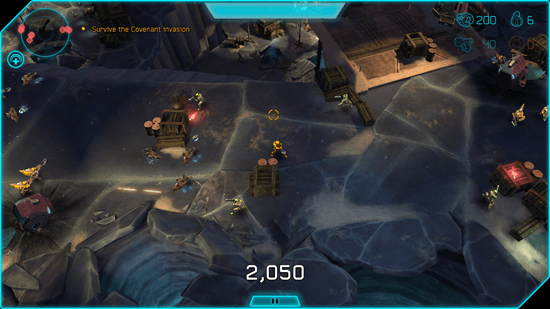 Halo: Spartan Assault Lite is another free shooting game for Windows 8, 8.1 and 10 devices. The game is exceptionally fun to play with cutting edge graphics that keep you hooked. It’s a spin on the Halo series of games which were originally designed for the Xbox console. The game has several cut scene animations shot in cinema style which make it even more fun to play. Being graphics intensive and heavy on download size, I do however recommend that you only download it on a system which has an onboard graphics card and uncapped data bandwidth/ large data bandwidth. 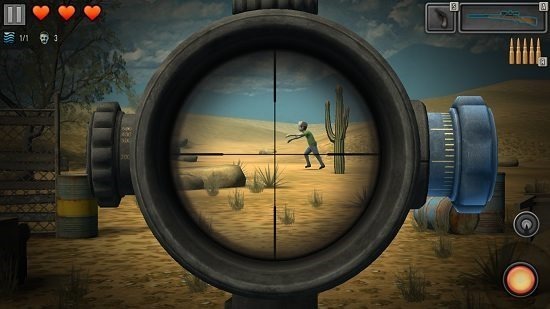 Last Hope – Zombie Sniper 3D is a free zombie sniper shooting game for Windows 8, 8.1 and Windows 10. The game is of the first person shooter format which starts off with a brief training where you first have to practice on stationary targets, then progressing to levels where you have to shoot zombies who are moving about on the screen. You are assigned a sniper rifle which has a scope view as well as a far view where the entire barrel of the gun can be seen on the screen. The scope view gives you a sharper aim, however it slows down the aiming process. The game is pretty fun to play and is lightweight – it runs well on low end Windows 10 devices too. 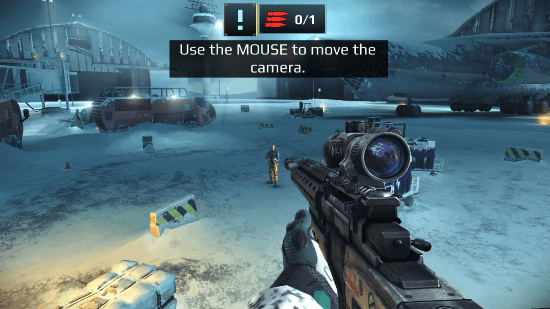 Sniper Fury is a great example of a game which checks all the right boxes for a lightweight first person shooting game for Windows 10. The game has unlock-able rifles, new scopes that can be purchased, bloody headshots and awesome reward systems that keep you hooked to your screen till the very end. The game has simple mouse controls and the keyboard is only used for movement – standard keyboard controls of up arrow, down arrow, right arrow and left arrow buttons or alternatively WSAD keys work for moving forward, backward, left and right respectively. Oh – and it supports older Windows 8 and 8.1 devices too!

Get Sniper Fury for Windows 10. 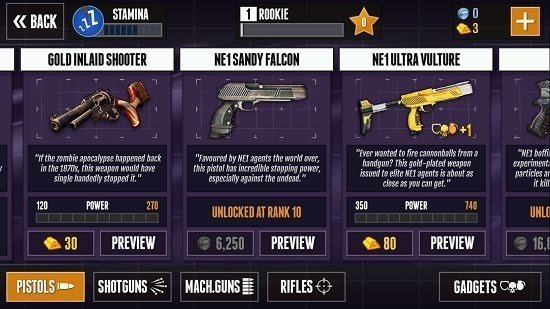 GunFinger is another great free first person shooter game for Windows 10. The game is set in an environment of zombie apocalypse, and in this, you need to shoot all the zombies in the various levels that are present in the game. GunFinger entails that you kill the maximum possible number of zombies during your time in the gameplay arena to complete the level. If you fail to kill the target number of zombies, you will eventually either be killed by a zombie or the time duration of the level will run out – both leading to an eventual failure. Overall the game is pretty fun to play and gets more challenging with each new level that gets unlocked. The game also has a weapons shop from where you can purchase new weapons for yourself to get an edge over the zombies. 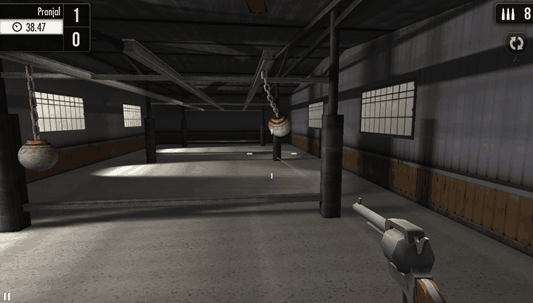 Shooting Showdown is a free FPS game for Windows 10 in which you have to test your aims by shooting at stationary and moving objects. The game has a huge armory to select your weapons from. The game pairs you up with a random player, and in this game, you are time restricted to shoot targets as many times as you can in the limited time allotted to you. Once the time runs out, it’s game over and the player with the maximum number of successful shots on the target wins the game.

Get Shooting Showdown for Windows 10. 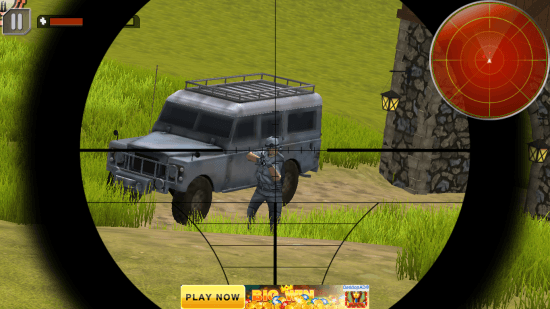 Commando Sniper Strike is another free shooting game for Windows 10 which is designed in a first person shooter format. The game is a guerrilla tactic type game in which you can choose from various levels to play from and in this game, you need to shoot down the enemy troops. The enemies in the game are also sniper shooters, and they shoot at you from a long range. You need to trace them and shoot at them to knock them dead. As the game progresses, you also get attacked by advanced vehicles like helicopters etc. and you need to use specialized weapons like missiles and RPGs to knock them down. All in all, the game is pretty fun to play.

Get Commando Sniper Strike for Windows 10. 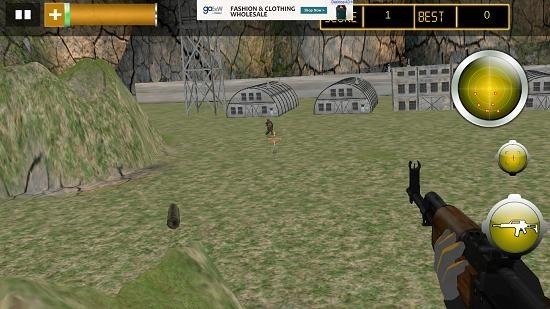 Army Gunship Attack Adventure is a free first person shooting game app for Windows 8, 8.1 and Windows 10 in which you are one of the chosen members who descends from the warship in the air. You need to trace the enemies hidden in the terrain and shoot them with the various guns that you have. You have a limited health and the health meter can be kept track of at the top of the screen. The enemies constantly attack you and you need to dodge their bullets, finally killing them all to progress to a further, more difficult level. 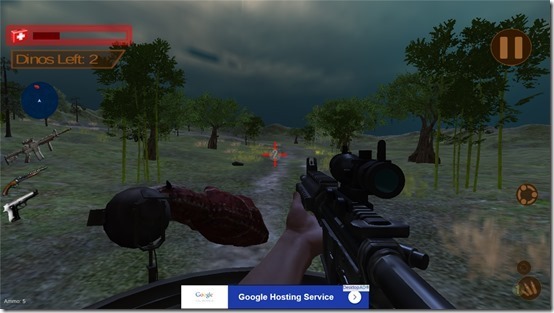 Dino Jungle Hunt is a free first person shooter game for Windows 10 devices, also compatible with Windows 8 and 8.1. The game has 3D graphics and surround audio, which gives you a feel of being surrounded by the active gameplay environment. The game has a unique twist to it in which instead of shooting humanoid enemies, you have to shoot down a set number of dinosaurs in the least possible time with your limited ammo. The dinosaurs may also attack you, and hence the health meter will come handy whenever you want to view the remaining health of your character. The game’s gun has two views – scope view as well as barrel view. You can feel free to choose whichever view you want to use.

Get Dino Jungle Hunt for Windows 10. 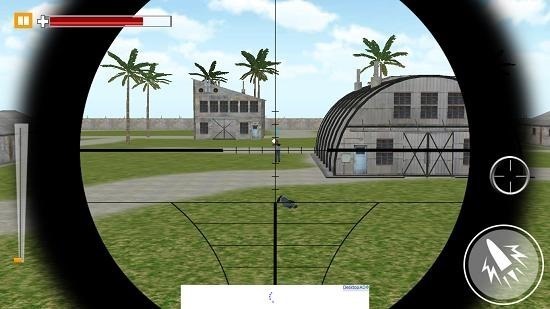 Commando Blackout: Sniper Kill is another free FPS game for Windows 8/8.1/10. This game takes you through complex 3D terrains where the enemies have to be shot down with least possible number of bullets in minimum time without dying to attain a high score – which is pretty similar to the concept of basically any other Sniper game for Windows 10. What makes it stand out from the crowd, however, is its amazingly smooth gameplay experience, great sound scheme and stunning visuals. The protagonist of the game can choose from rifle view or scope view, and the game has onscreen toggles too, which makes it perfect for touch screen devices.

That’s a wrap for our list of 10 best free FPS games for Windows 10 devices. Do try them out!