Here’s a list of 5 reddit client apps for Android which you can use to read news from reddit on your phone or tablet. reddit needs no introduction because it’s the frontpage of the internet. For those unlucky few who aren’t familiar with reddit, it’s a content aggregation website/social network where users can submit and then up vote (or down vote) interesting images, news, videos, etc., from around the web.

Let’s look at these reddit client apps in detail. 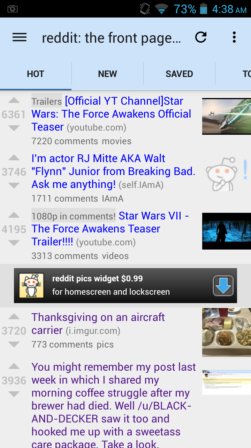 To browse reddit there’s no need to login with your account, but to post, reply to PMs, downvote and upvote you will need to login. At the top of the interface there are tabs for switching between the usual hot, new, top, controversial, rising and gilded posts. reddit is fun allows you to view images, news articles and videos within the app, or it uses site specific apps if they’re installed (YouTube for example). Swipe from right to open up the subreddit browser. It’s also possible to search for subreddits. 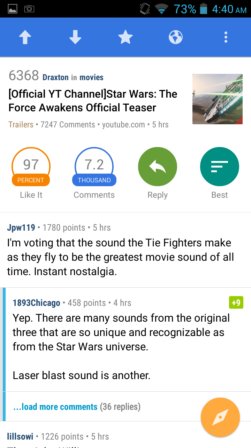 Reddit News comes close behind reddit is fun in my book. It’s another great reddit client app that has much of the same features found in reddit is fun, only the interface is completely different.

On the image above you can see a submission open using Reddit News. Comments can be open by swiping up from the bottom of the screen. Use the top left corner dropdown menu to browse and search subreddits. Swipe from left will open up a sidebar menu where you can access your profile, inbox, friends list, list of subreddits you’re subscribed to and more. Reddit News has additional moderator specific controls. Submitted images and videos can be open in a pop-up from the homepage without having to open the actual submissions (saves time when browsing).

Also have a look at Official Reddit AMA App for iPhone. 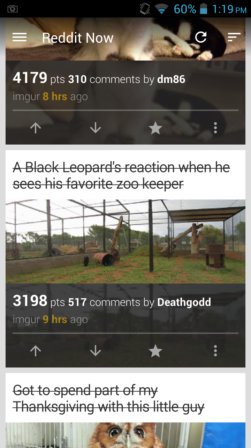 Reddit Now has a unique way how upvoted submissions from reddit can be browsed. The submissions are arranged in tiles where a larger preview of the submission is showed.

If it’s an image or video you’ll see thumbnails, and if it’s a text submission, you’ll see a short text snippet. Each tile has upvote and downvote controls, and an option to favorite a certain tile. In a tab strip at the top you’ll be able to switch between subreddits. App supports login, submissions, private messaging, the works. 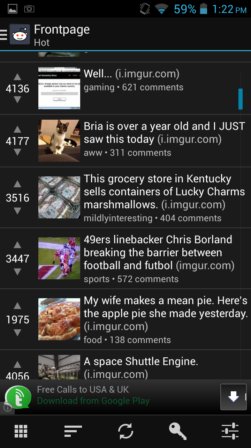 Reddit In Pictures will only fetch and show popular images from reddit, allowing you to avoid all the text submissions, comments, etc.

Also have a look at 5 Free Reddit Apps For Windows 8. 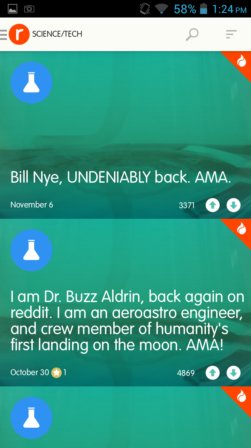 It’s an app intended for people to keep track of the famous reddit “Ask me Anything” sessions where famous people from all walks of life answer questions submitted by reddit users. AMAs are categorized based on who the person doing the AMA is and they’re formatted so it’s easier to read them.

Like I already mentioned I really liked using reddit is fun. Reddit News also isn’t that bad, so give that a try also. Other apps are also great if you’re looking for a more specialized reddit experience (images and AMAs).