Here’s a list of 5 free Android apps which you can use to convert audio formats. A lot of, or should I say most modern devices support all the more popular audio formats that are out there, but what can you do when you come across someone who has an older phone and can only play 3GP video, and you have MP4? In that case you need to convert your video before it can be shared with that other person.

Here are 5 audio converter apps that you can use. 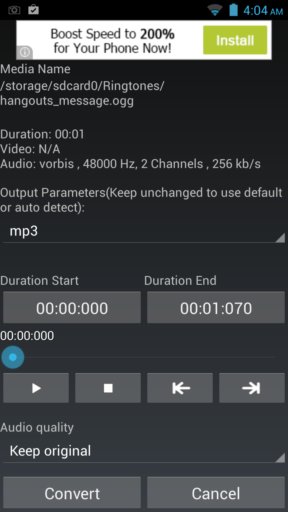 Media Converter supports both video and audio conversion. After running the app first you’re gonna see a file browser which lets you select the file that you want to convert.

Lots and lots of media formats are supported. MP3, MP4, OGG, AVI, MPEG, FLV, WAV, AAC, 3GP. If your device doesn’t have proper codec support Media Converter will offer you to install its own. Audio can be cropped and the audio quality changed. 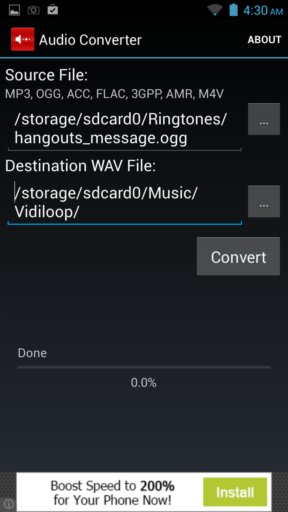 Audio Converter converts audio tracks to WAV audio format. WAV and only WAV is supported as output. Lots of formats can be loaded for conversion, MP3, OGG, ACC, FLAC, 3GPP, AMR, M4V. But only WAV is available for output.

Two things have to be setup for the conversion to take place. First input file needs to be selected and then the destination WAV file, where you want the output to be saved, also needs to be set. 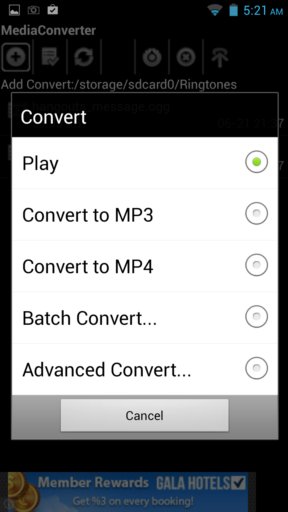 Mp3 Media Converter isn’t limiting the way that Audio Converter is, despite its name. Other formats are supported, meaning other audio formats can be set as the output format. For example besides MP3, MP4 conversion is also available.

Something else that’s worthy of a mention is batch conversion. Yes, if you need to convert more than 1 audio track, MP3 Media Converter can do that for you. Just select Batch Convert from the convert menu, see image above, and all the tracks from that directory are gonna be converted. 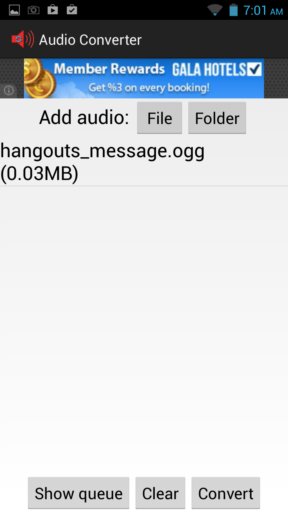 Audio Converter by M-Apps has a simple setup, but that doesn’t mean that it lacks in features. All the major media formats are supported, including videos, yes that’s right you can also convert videos.

You can open and convert MP3, WAV, OGG, M4A, FLAC, MP4, 3GP, WMV and more. Once that you select the file that you want to convert and once that you’ve tapped on the Convert button, additional settings will be showed where you can select the output format, adjust quality and even trim the audio that’s being converted.

Get Audio Converter by M-Apps. 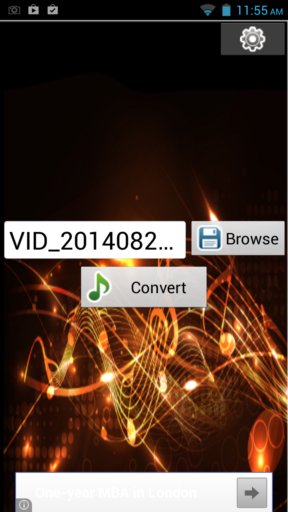 MP3 Converter by Keerby is another simplistic converter which only converts to MP3.

Pretty much every format out there is supported as input, including videos, but output is only to MP3. By tapping on the gears icon in the top right corner you’ll be able to change the quality of the converted audio and that’s about it, no other settings can be tweaked.

Also have a look at Audio Converter To Convert Audio Files To Other Formats.

Media Converter, the first audio converter app from the list is the best in my opinion because it’s simple to setup, while at the same time it has lots of settings that you can tweak available. Audio Converter by M-Apps takes the second place. Leave comments down below with your opinions and suggestions.