This tutorial explains how to download tracks liked on SoundCloud to Dropbox automatically.

SoundCloud is one of the largest online digital audio distribution platforms out there, and probably one of the best sources for discovering some truly amazing new music. You can stream music, like new artists, and create playlists of your favorite tracks on SoundCloud. Though most of the digital music on SoundCloud can be only streamed online, there are some truly great musical compositions that can be downloaded free of cost. However, there might be cases when downloading a track is not exactly a feasible option (e.g. when you’re using a public computer).

Wouldn’t it be great if you could automatically get a track you like on SoundCloud, delivered to your cloud storage account, without requiring any download/upload from your part? Thanks to a simple recipe from IFTTT (If This Then That), the revolutionary technology that makes the web “work for you”, you can automatically have a track liked by you on SoundCloud, downloaded in your Dropbox account. Don’t believe me? Read past the break, fellas!

How To Download Tracks Liked On SoundCloud To Dropbox Automatically?

Note: This recipe only works for the SoundCloud hosted tracks that can be legally downloaded (i.e. the tracks that have the option to Download enabled by their uploaders/original artists).

Step 1: The first step involves activating the official SoundCloud and Dropbox channels on your IFTTT profile. To do so, login to your IFTTT account and, head over to the Channels section:

Step 3: Now that the channels have been activated, the final step is to find the recipe that will allow you to download your SoundCloud liked tracks to Dropbox, and use it. You can find the recipe simply by using the search bar and entering “SoundCloud” and “Dropbox” as the search strings (or save yourself the trouble and click here). Once the recipe is found, simply click the Use Recipe button. 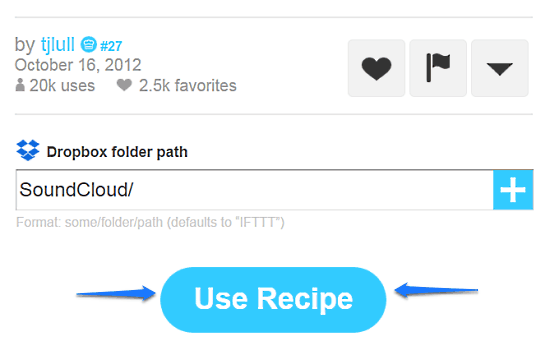 That’s it folks! From now on, whenever you like any (downloadable) track on SoundCloud, it’ll be almost instantly downloaded to your Dropbox account, in a separate folder, named SoundCloud. That’s some neat stuff, if you ask me!

The ability to download a song that you like on SoundCloud automatically to Dropbox (and that too near instantly) is one of my favorite IFTTT recipes. It shows how IFTTT (If This Then That) can completely automate the monotonous daily online activities for you, so that you can truly enjoy the Internet. Do give it a try, you’ll love it.