IFTTT (If this then that) is a free service that enables you to create triggers on web services and act upon them. This online service provides you with ability create connections between two completely different web services with the use of very simple method and statement as shown in the screenshot below.

For example, you can use this service to monitor your Facebook to see if you have been tagged to a photo; and when that happens, this can download that photo to Google Drive. Similarly, you can create links between various popular web applications, like, Facebook, Dropbox, Instagram, Google Reader, Gmail, etc.

In this manner you are able to create interaction between two totally different services that do not have a direct way to interact between them. 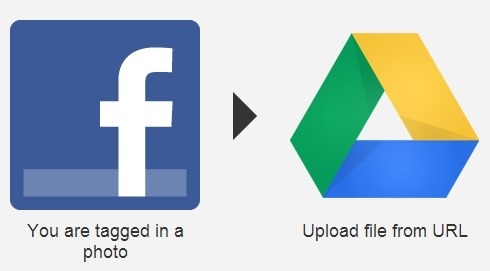 IFTTT allow you to interact between huge list of services which are supported by IFTTT. Personally I am a big fan of this and the way in which it lets you do all kinds of amazing things with complete ease. The basic way in which this service works has been shown in the screenshot below. If you have ever done programming, this would sound quite familiar to you.

The services between which we cause interactions are called channels here. Further explanation of channels and other jargon are below; you need to know these basic things before getting started with IFTTT.

IFTTT consists of many things like Channels, Triggers, Actions, Ingredients, Recipes etc. So I am going to explain each and every component of this web service before I continue with how to use these components and built your own recipe.

A channel is the basic building block on IFTTT. The services on which we are going to act upon like Gmail, Dropbox, Facebook etc. are called channels. Each channel has some triggers and actions associated with it. Below are some examples of some common channels in IFTTT. Do no think this is it; the whole channel list is amazingly huge and provides you with the ability to interact with lots of different web services.

A trigger is a certain action for which IFTTT watches a web service and when this trigger happens on a chanel then IFTTT performs an action which was written in the IFTTT statement. An example of a trigger is getting tagged in a Facebook photo. What an action is explained below.

This is the “that” part of the “if this then that” statement. This is called action and an action on a channel will be performed when the trigger happens which has been described above.

Ingredients are the pieces and part of data from triggers. A very simple example of this would be sender’s address, body, subject etc. which are ingredients of an email trigger.

A recipe would look like as the one shown in the screenshot below. In simple terms it is the end product and the combination of triggers and actions on an active channel. The best thing about IFTTT is that you can share these recipes amongst the community and find and use recipes made by your fellow community members.

How to create a recipe using the components:

In total, this is an amazing little web service that allows you to interact between different web services.

Also we are going to shortly start posting best and useful recipes regularly, so that you guys can extend and experiment with the web service and it’s features, so stay tuned.