NotPod is an application which you can use in order to synchronize songs which you have in your iTunes library with other players, which are not iPod, hence the name Notpod. Those who are using iTunes as their music player are probably aware of the fact that iTunes isn’t very kind when it comes to regular MP3 players and that if you have MP3 or WMA songs loaded in iTunes, you won’t be able to synchronize them with non-iPod MP3 players. 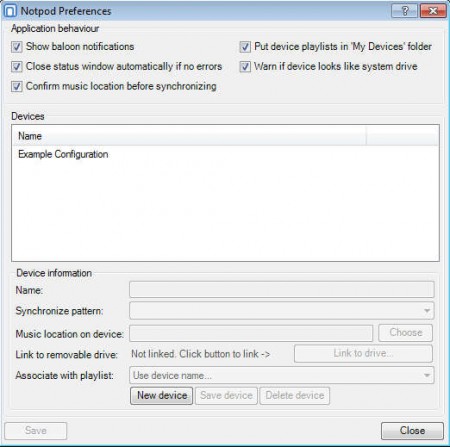 This is the default interface of this useful little iTunes utility which can be very helpful for all those that are searching for a way to easily synchronize their iTunes library with MP3 players that were not made by Apple. The Notpod isn’t technically speaking a program, it’s just an extension for iTunes which will run in the system tray. iTunes will have to be opened in order for Notpod run, if it’s not you’ll get errors.

First thing before you can update your music collection with your MP3 player you’re going to have to add the device that you’re interested in synchronizing to the iTunes list of devices. That’s the easiest way of how you can add music to it directly from the iTunes playlists. 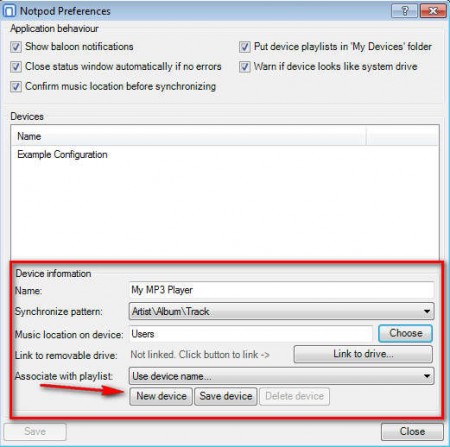 After you click on the Save device button, it will appear on the list of devices in the left sidebar of iTunes. From the options that you have to set when adding a new device, the most important one would be the Synchronize pattern which will be the way that Notpod will recreate the folder structure of the albums on the device. Music location on the device is the folder where songs will be saved. There’s even an option with which you can connect pre-made playlists, the 90’s Music, Classical Music and so on with your MP3 Player. 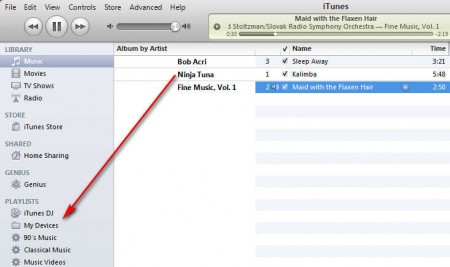 Adding songs to removable media is easy as dragging and dropping, in fact it’s exactly that. Browse through your compilation and find the songs that you want to add. If you want to add the entire playlist, you can select it by holding down the Shift key while clicking on the first song and then going down to the last song and clicking on the last song. Then simply drag and drop the entire selected playlist to your device and the iTunes music library will be synchronized with your MP3 player.

Notpod will not be the thing that you use to add songs from your iTunes library, it’s just a tool that will allow you to add your device into the iTunes list of My Devices. Once you do that syncing the library becomes very easy thing to do. This is the perfect tool for anyone who is in love with iTunes but who isn’t interested in using the iPod, those who would rather be using some other generic MP3 player, which are a lot more cheaper. Install Notpod and see how easy it is to sync your iTunes music library with your non-iPod music player, for free.