Here’s a list of 3 camera apps for Android which let you take photos with both the front and back cameras at the same time. Taking selfies will only tell your friends on social networks one side of the story, same as taking pics with just the front camera will (you won’t be there). Camera apps from the list down below take images with both the front and the back camera at the same time, allowing you to share what’s in front of both cameras in a single image.

Let’s see the apps that we found. 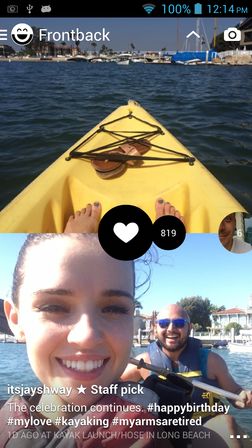 Frontback is much more than just a camera app where you take images with both the front and back camera at the same time.

This app also has a community with which you can share your photos and view other photos that other people have shared with you. For this reason you will need to register an account with Frontback, and this can’t be avoided, which is a bit unusual for a camera app. Google sign in is available to make the registration process easier on you. Camera app first takes a photo with the back camera (flash supported), then with the back after which both snapshots are combined in a single image that you can share.

Make sure to also checkout 5 Free Camera Apps For Android. 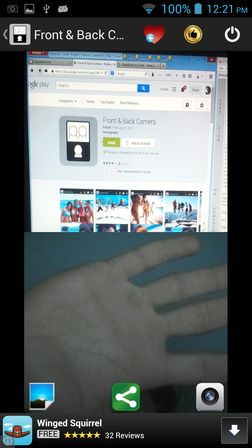 Front & Back Camera is an app that works just like Frontback. It will first take a photo with the back camera and then another one with the front camera after which they are combined in a single image that you can share on social networks.

Note that back camera and front camera pics aren’t taken at the same time. They are taken separately and the final image is only created when both back and front images are created. Front & Back Camera doesn’t require you to register an account, and it has social sharing buttons which let you share created photos via social networks straight from the app.

Get Front & Back Camera. 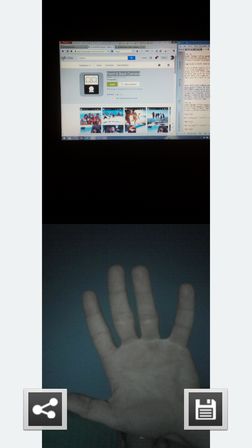 Front Back Camera Photo App is even more simplified than Front & Back Camera. When you run the app you’ll only see the back/front camera preview boxes and the “take photo” button in the middle.

First the back camera photo is taken, and then the front. After that you’ll be presented with the combined image. It can be saved or shared via social networks right away using the Share button, see image above.

Get Front Back Camera Photo App.

Make sure to also have a look at 5 Free 3D Camera Apps For Android.

All three apps are great at what they do. Frontback might have a slight advantage with me because it has flash, which is something that the other two camera apps mentioned above don’t have. They are still great for taking pics during the day, or just in well lit areas. Give them all a try and let me know what you think in the comments down below.