Avert is a free malware detection and malware removal tool for Windows. Avert helps in removing malware from PC that have been already infected by malware. For that, Avert provides an option to use malware scanners from some of the top anti-malware providers.

Malware, as you already know is a big threat to the computers today. Whether it is a spyware, virus, rootkit or anything of that sort it is extremely dangerous to your computer. They can bring down the whole system once activated. These malwares can damage your hardware and damage your data. A massive malware attack could result in huge financial loss as well. It should be noted that most of the anti-malware softwares become unusable after a malware attack and Avert differs in that case. Given the fact that malwares have evolved with time, they are able to disable most of the malware removal tools they come across. 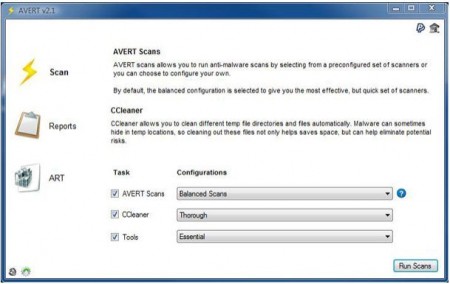 Avert is a portable software which can be used in any system. It offers the best features of some of the most powerful malware detection and removal tools. Instead of having all those services on its own they combine many of the powerful softwares to provide one of the best experiences.

Avert has kept its basic operations very simple making you to appreciate the easiness. Basically three steps are involved: malware scanning, file cleaning and other essential recovery (such as registry). You are free to select the depth required for each of these actions.

It must be kept in mind that Avert doesn’t have a malware scanner on its own. It allows the popular malware scanning tools to perform this action. VIPRE engine is the default engine used for the scanning. You can go to the settings and download the extra tools you want for the malware detection. You need to download these extra tools from internet and the software allows you to do that. It supports Asquared, Trend Micro, Sophos, ClamWin, and Panda.

Coming to the virus detection tools, it works only with AVG as of now. It may not work that well with other antivirus tools. It also has got another excellent tool namely ‘CCleaner’ which can be used to clean the temporary files which are often a huge threat as far as the malwares are concerned.

Avert is a powerful tool which can be used as a last resort when the damage is severe.