MusicZen is a free portable music management software for Windows which you can use in order to organize and arrange your songs, after they’ve been ripped from CDs. This free music organizer will take unsorted music, which was ripped inside a folder, copy or move it to another location and while the music is transferred songs are going to be renamed and files structure changed according to artist and album information contained inside ID3 tags. 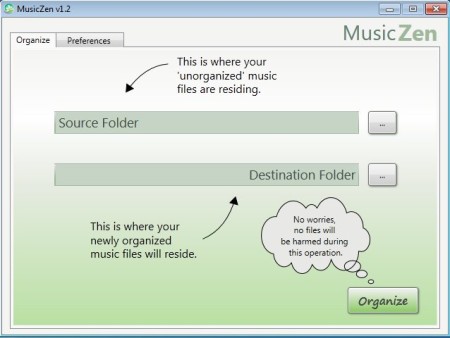 Screenshot above shows us the interface of this free music organizer. All the important options and settings have explanations with arrow indicators pointing at each one of them. The two file selection fields are for opening up the source music folder and the destination folder where they are going to be organized. Preferences can be accessed by clicking on the Preferences tab at the top. Key features of MusicZen – free music management software are:

When ripping music from CDs, depending on which program you used, they might end up being saved in the same folder. If you would like to organize songs, they are either going to have to be organized manually, or you can use MusicZen. Here’s a few pointers to help you get started.

First thing that you need to do is set the source and destination folders of where your music is located, and where the organized collection is going to be saved. After that it might be a good idea that you switch over to the Preferences tab and there select just how you want your music organized. 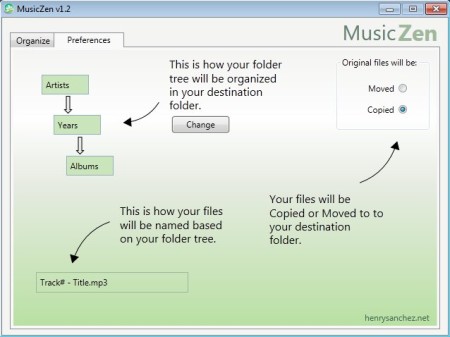 Click on the Change button in order to adjust the way that the folder structure is going to be saved. Change button will change both the top and bottom structure of folders and file name. Flip through them until you find something you like. In the top right corner, you can also select if the files are going to be moved or copied. 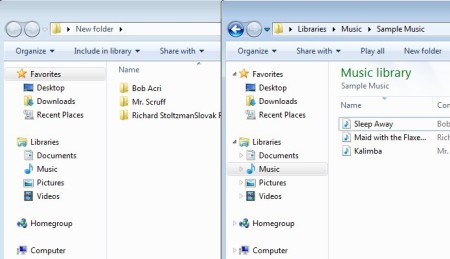 This is a before and after shot of how music and songs are going to look like after you’ve organized them using MusicZen. Information about artist and album name, year of release and so on will be collected from the song’s ID3 information and used when creating the folder structure.

MusicZen does everything as advertised. If you have an unorganized music collection where songs are not in their folders, where they don’t have names written properly, this is the tool for you. It’s portable, so you don’t need to install it in order to try it out. Installer version if also available though. Give it a try and see how it goes. Free download.