When your computer is infected by a virus, all the programs that are running in the background will stop. Your Windows will become unstable. With Sardu, you can create an antivirus rescue disk which can be used to scan, and remove the virus on your computer. Sardu will remove 90% of the virus in your computer so that you can restore the disabled regedit, Windows Task Manager, cms and etc. 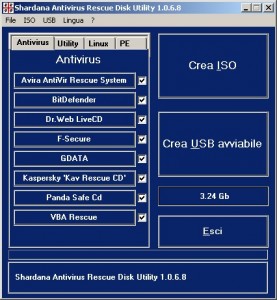 Sardu is a free utility which is licensed under the Individual ISO/IMA license. After Sardu has extracted the content, it can produce a CD/DVD, or even a bootable USB that is categorized into four sections including antivirus, utilities, linux and PE. After you have downloaded Sardu from the website, decompress the zip files. Click on the Sardu application icon and the Sardu application will launch.  You will see four tabs which are Antivirus, Utility, Linux and PE. Clicking on a application within the tab will take you to its download/update page.[subscribe-to-us]

Sardu can be used to make ISO images of bootable antivirus programs, utilities, Linux and the most popular distributions of Windows PE. When you first created an ISO universal rescue disk, it will take a long time. After that, the whole process will be faster. Sardu is an intelligent program which will automatically detect the ISO image located in the ISO folder. Sardu will automatically check for updates and update itself to the latest version so that you don’t have to reinstall a newer version of the application again.

Shardana Antivirus Rescue Disk Utility is a very popular program, and professional computer engineers highly recommend it. If your computer has become heavily infected with virus or malware, then Sardu can clean the computer. Once your computer is clean, make sure you install a good free antivirus on it.