A desktop manager is a software that helps you organize your desktop better. This is primarily done by better organizing your open documents and applications, and providing a quick way to access any of them. A Desktop manager is really useful for those who tend to have a lot of windows open at the same time.

2) BumpTop: Stack your Files and Icons on a Desk 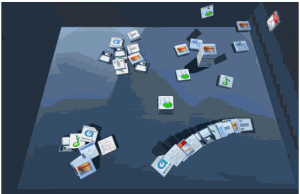 BumpTop is another unique desktop manager, that I absolutely love. It does not intimidate you with virtual desktops. Instead, it turns your desktop into a simple 3D desk. On that, you can create piles of your files, like cards in a deck. You can quickly shuffle through any pile, move applications from one pile to another, and easily go through all files in a pile. It is extremely intuitive to use.

Update: Bumptop has been acquired by Google and no official support or download is not available.

3) Aximion 3D Desktop: Arrange your Windows in a 3D Space 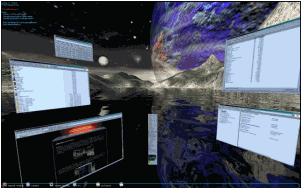 Aximion 3D Desktop manager turns your desktop into a true 3D space. It adds a 3D interface to your Windows. You can arrange Windows on your desktop in this 3D space in any way you want. This gives you so much additional space to organize your desktop, and still not make it feel cluttered. 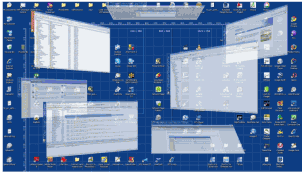 T3Desk is a similar desktop manager like Aximion. It also adds a 3D space on your desktop, and you can easily organize your open documents and applications in that.